Structure of the plant cell 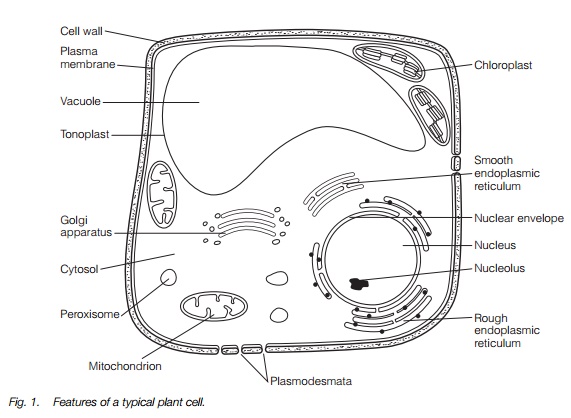 The plant cell has a cell wall and plasma membrane enclosing the cytoplasm. Organelles, bounded by membranes, occur within the cytoplasm and are supported and moved by the cytoskeleton. The nucleus contains DNA and nucleoli. Many plant cells have a large vacuole.

The plant cell has a cell wall and plasma membrane enclosing the cytoplasm. Organelles, bounded by membranes, occur within the cytoplasm and are supported and moved by the cytoskeleton. The nucleus contains DNA and nucleoli. Many plant cells have a large vacuole.

The endomembrane system of the cell is involved in synthesis and transport. The nucleus is surrounded by a nuclear envelope. The endoplasmic reticulum (ER) is divided into perinuclear ER and cortical ER, and may be smooth or rough (coated with ribosomes). Material from the ER is modified and sorted in the Golgi apparatus (GA) from which it

travels in vesicles to the plasma membrane or the vacuole.

The cell wall is a dynamic, metabolic structure made up predominantly of carbohydrate. Adjoining cells are inter-connected by plasmodesmata, in which membranes bridge the wall. Everything within the plasma membrane is the symplast; outside it is the apoplast, which is a waterpermeated space, in which hydrophilic molecules are dissolved.

Plant cells show a wide range of shapes and internal structures, depending on their function. Figure 1 illustrates the key features of a typical plant cell. Other cells, such as reproductive cells and conducting cells may be very different in appearance. It consists of a cell wall in close contact with aplasma membrane surrounding the cytoplasm, which is made up of aqueous fluid cytosol and many organelles. These organelles are supported and moved by a meshwork of fine protein filaments, the cytoskeleton, which includes microtubules made up of the protein tubulin and microfibrilsmade up of the protein actin. The nucleus contains genetic information in chromosomes and nucleoli that contain machinery for the production ofribosomes.

In most plant cells, there is a vacuole that may occupy up to 90% of the cell volume, surrounded by a membrane, the tonoplast. It contains solutes dissolved in water. It is important in storage and osmotic regulation . 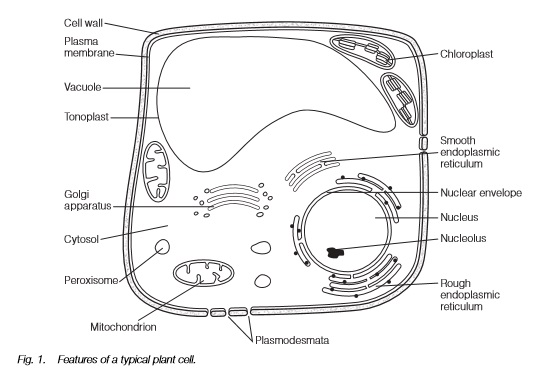 The cell contains a system of membranes termed the endomembrane system involved in the synthesis and transport of materials. The nucleus is bounded bytwo membranes, the inner and outer nuclear envelope, with nuclear pores topermit traffic of material. The outer nuclear envelope may be joined to amembrane system, the endoplasmic reticulum (ER) which may be smooth (siteof lipid synthesis) or rough (coated with ribosomes; site of protein synthesis). Inplant cells, the ER is often divided into perinuclear ER (ER around the nucleus)and cortical ER (ER at the cell periphery). Material from the ER is trafficked tothe Golgi apparatus (GA), a series of stacked membrane compartments(cisternae) in which modifications are carried out by enzymes. Material leavingthe GA travels in vesicles to its destination, either the plasma membrane or the tonoplast(vacuolar membrane).

Plant cells have two major organelles of energy metabolism, one, the chloroplast, not being found in animal cells. Mitochondria (Topic B3) are bounded by a double membrane and generate adenosine triphosphate (ATP) from stored food reserves (carbohydrate, lipid; Topic J4). Chloroplasts(Topic B3) belong to a group of organelles known as plastids. Chloroplasts photosynthesize (Topics J1 and J2), using the energy of sunlight and carbon from carbon dioxide to produce carbohydrate. Amyloplasts are plastids modified to store starch. Plant cells also contain microbodies that are small membrane-bounded organelles. Peroxisomes contain catalase to remove toxic hydrogen peroxide produced in metabolism and glyoxysomescontain some enzymes of lipid biosynthesis.

Surrounding the cell is a cell wall that is a metabolically active and constantly modified structure made up predominantly of structurally strong complex poly-saccharides (Topic B2). Adjoining cells may be inter-connected by plasmodesmata, pores through the wall where plasma membrane and ER connect. Everything within the plasma membrane is termed the symplast; everything outside it is the apoplast, which is a water-permeated space, in which

hydrophilic molecules are present in solution. Cell walls function to adhere adjacent cells together in the formation of tissues and organs.