Strength of Materials- Advanced Topics In Bending of Beams

ADVANCED TOPICS IN BENDING OF BEAMS

The plane of loading (or) that of bending does not lie in (or) a plane that contains  the principle centroidal axis of the cross- section; the bending is called Unsymmetrical bending.

(i) The section is symmetrical (viz. Rectangular, circular, I section) but the load  line is inclined to both the principal axes.

(ii) The section is unsymmetrical (viz. Angle section (or) channel section vertical  web) and the load line is along any centroidal axes.

Aw = Area of the web

Af = Area of the flange

A CHANNEL SECTION HAS FLANGES 12 CM X 2 CM AND WEB 16 CM X 1  CM. DETERMINE THE SHEAR CENTRE OF THE CHANNEL 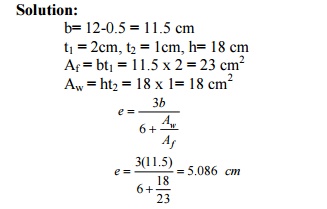 5 WRITE THE SHEAR CENTRE EQUATION FOR UNSYMMETRICAL I SECTION

h = height of the web

b1 = width of the flange in right portion.

b2 = width of the flange in left portion.

Ixx = M.O.I of the section about XX axis.

6 DERIVE THE EQUATION OF SHEAR CENTRE FOR CHANNEL SECTION

S1 = Shear force in the top flange (there will be equal and opposite shear force  in the bottom flange as shown.)

Now, shear stress (t) in the flange at a distance of x from the right hand edge (of the top flange) 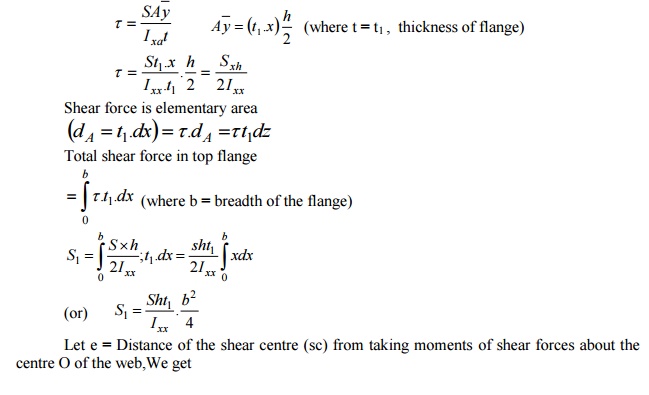 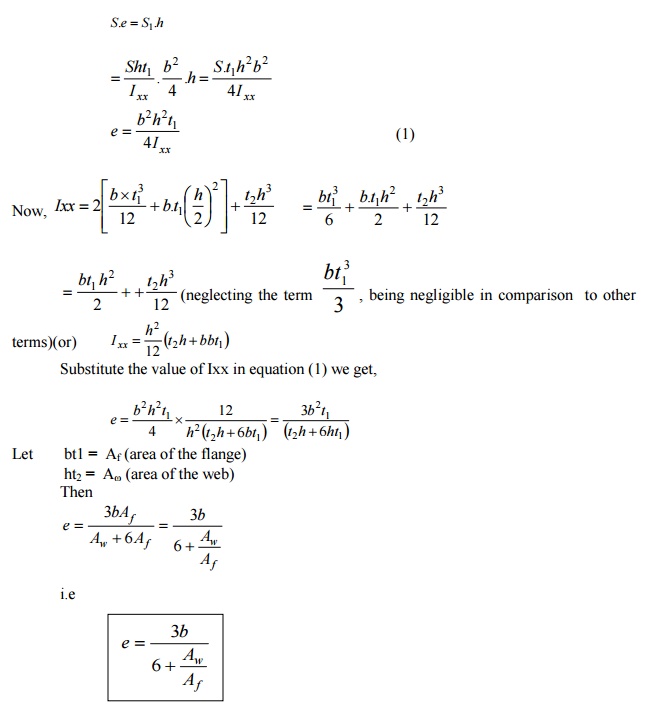 7 DERIVE THE EQUATION OF SHEAR CENTER FOR UNEQUAL-SECTION Solution:

An unequal I -section which is symmetrical about XX axis.

Shear stress in any layer, 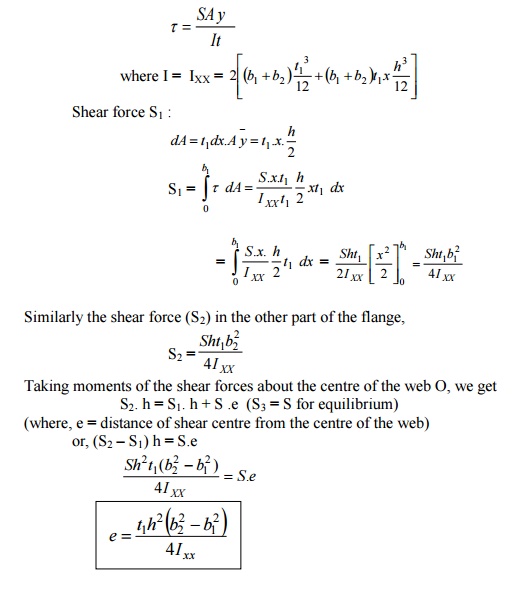 The simple bending formula, however, is not applicable for deeply curved beams where  the neutral and centroidal axes do not coincide. To deal with such cases Winkler -Bach Theory  is used.

Let R = Radius of curvature of the centroidal axis HG.

R?   =         Original angle subtended by the centroidal axis HG at its  centre of curvature O and

For finding the strain and stress normal to the section, consider the fibre EF at a distance  y from the centroidal axis.

Let ? be the stress in the strained layer EF  same layer. 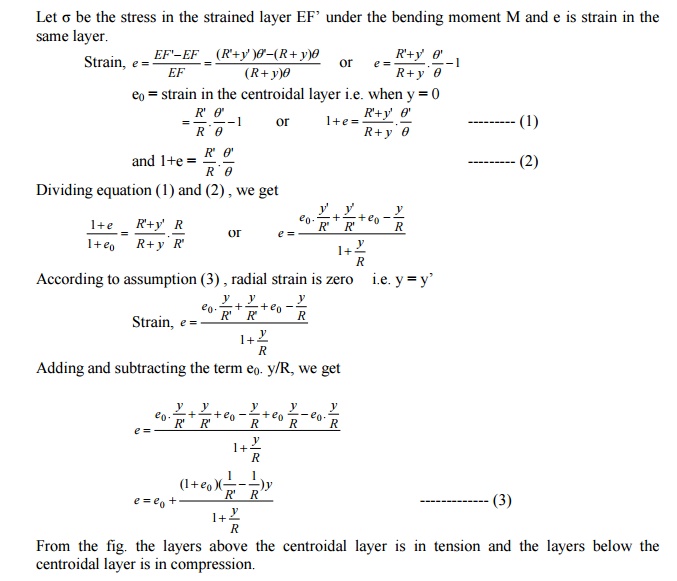 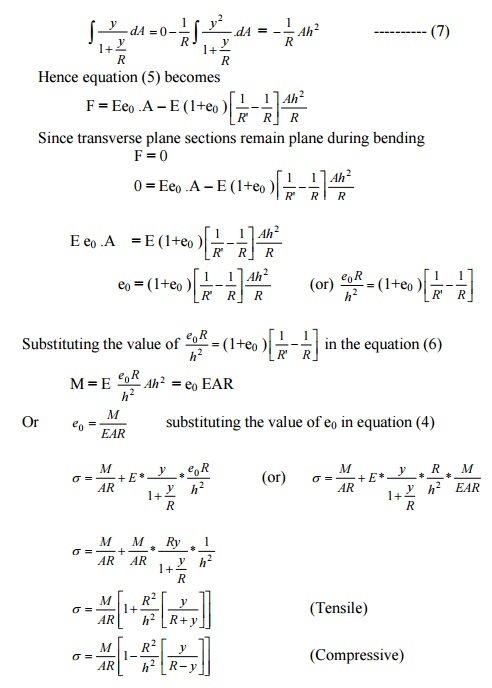 The curved member shown in fig. has a solid circular cross -section 0.01 m in diameter.  If the maximum tensile and compressive stresses in the member are not to exceed 150  MPa and 200 MPa. Determine the value of load P that can safely be carried by the member. 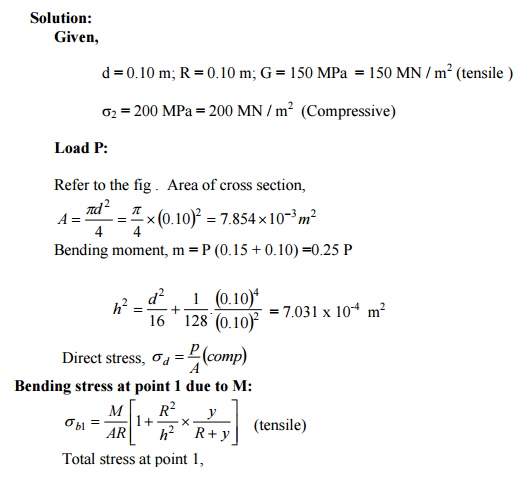 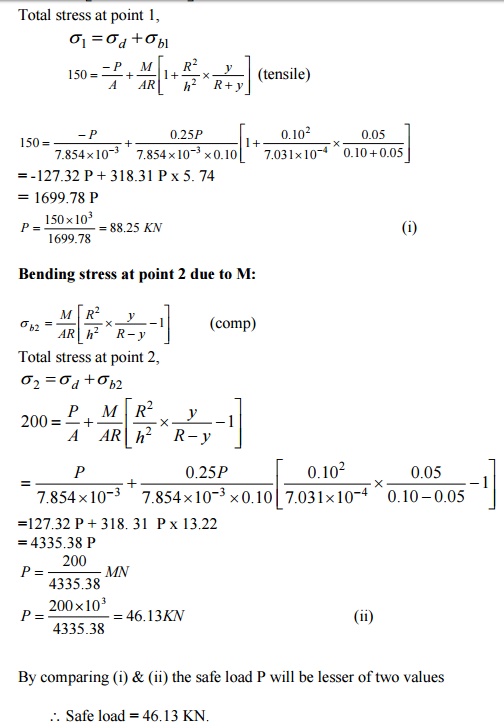 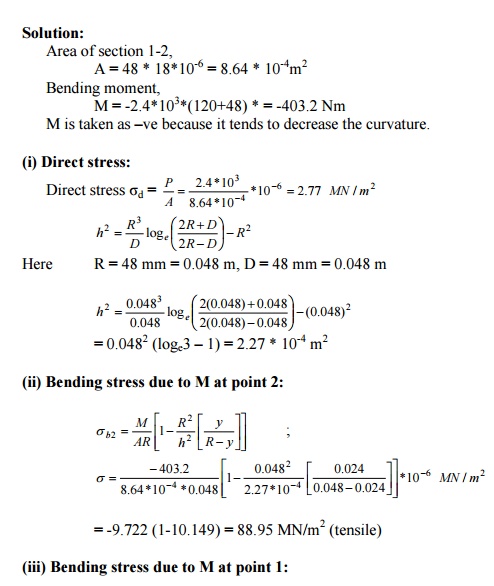 A curved bar is formed of a tube of 120 mm outside diameter and 7.5 mm thickness. The  centre line of this is a circular arc of radius 225 mm. The bending moment of 3 kNm  tending to increase curvature of the bar is applied. Calculate the maximum tensile and  compressive stresses set up in the bar. 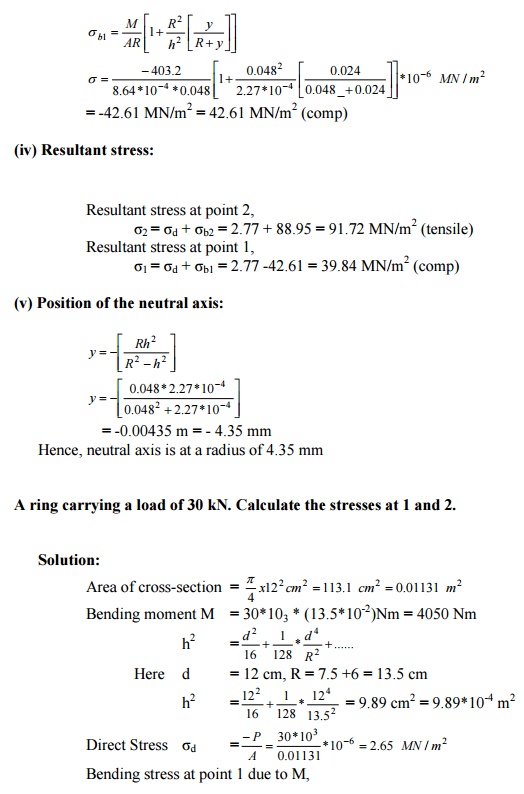 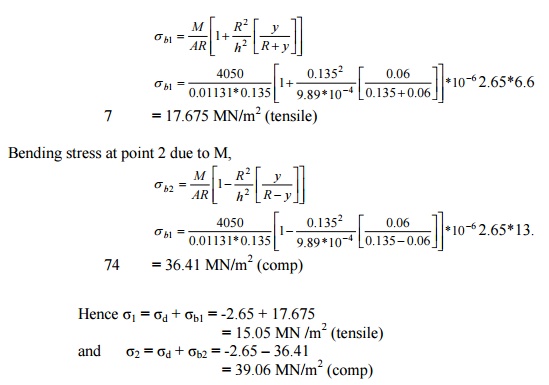 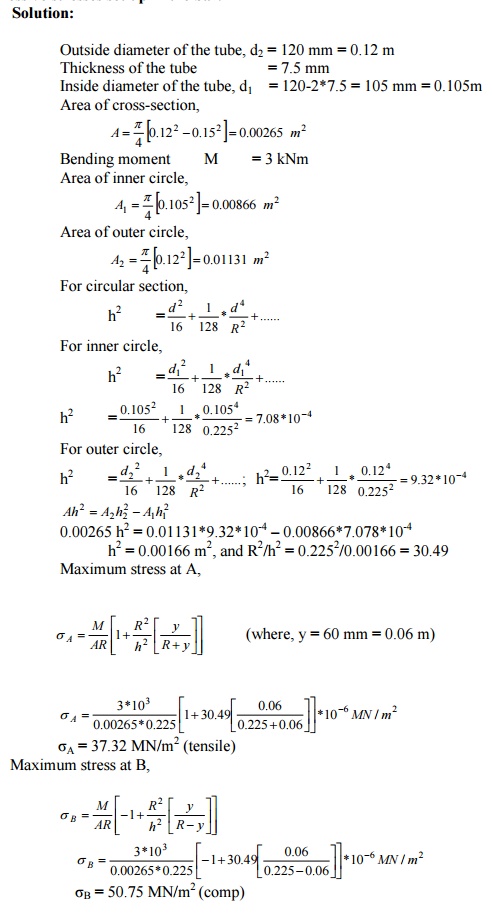 A CURVED BEAM HAS A T-SECTION. THE INNER RADIUS IS 300 MM. WHAT IS  THE ECCENTRICITY OF THE SECTION? 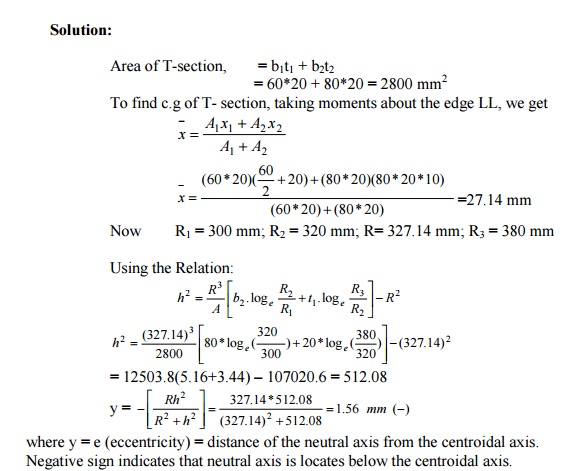 C- FRAME SUBJECTED TO A LOAD OF 120 KN. DETERMINE THE STRESSES AT A  AND B. 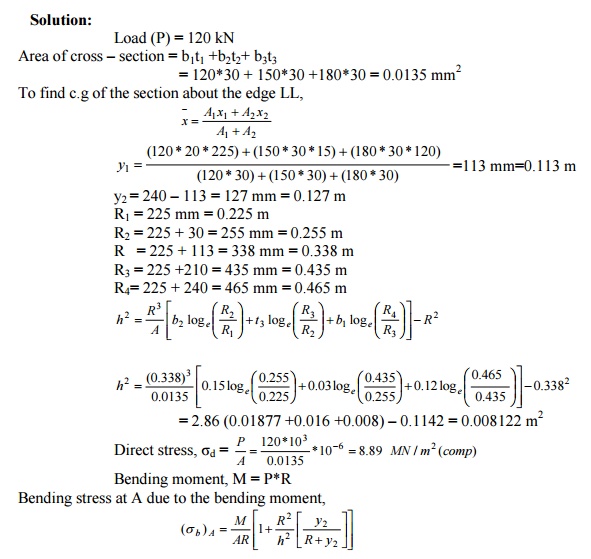 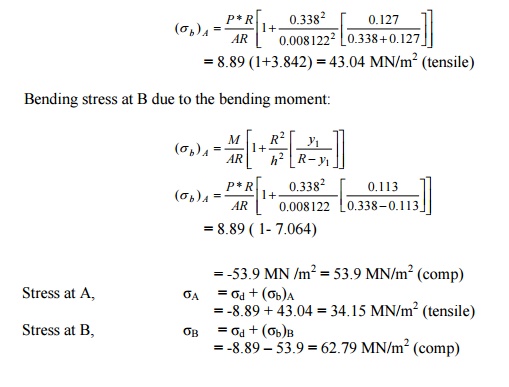 DERIVE THE FORMULA FOR THE DEFLECTION OF BEAMS DUE TO

Then  depending   upon   the   end  u conditionsandvare?givenby   of   th

where, K = A constant depending on the end conditions of the  beam and position of the load along the beam, and

l = length of the beam 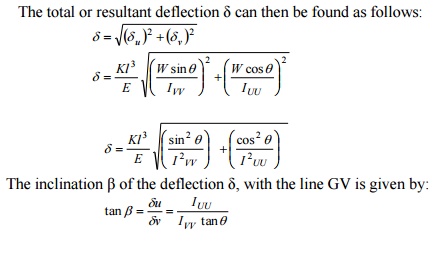 A 80 mm x 80 mm x 10 mm angle section shown in fig. is used as a simply supported beam  over a span of 2.4 m. It carries a load of 400 kN along the line YG, where G is the centroid  of the section. Calculate (i) Stresses at the points A, B and C of the mid -section of the  beam (ii) Deflection of the beam at the mid-section and its direction with the load line (iii)  Position of the neutral axis. Take E = 200 GN/m2 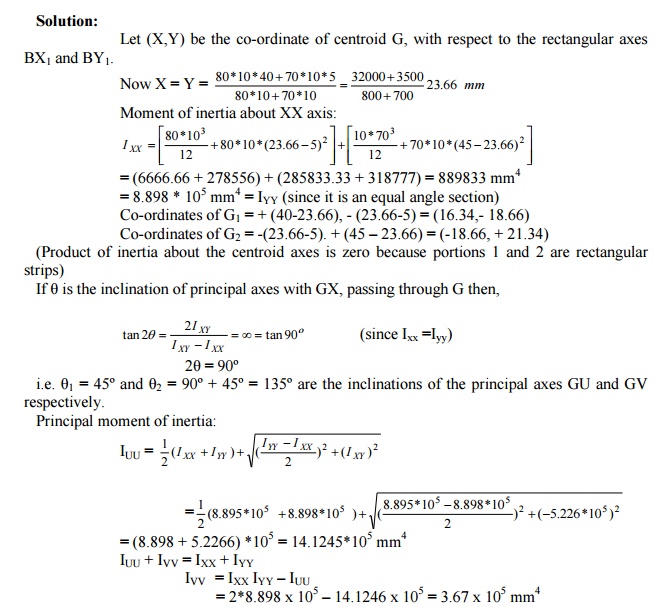 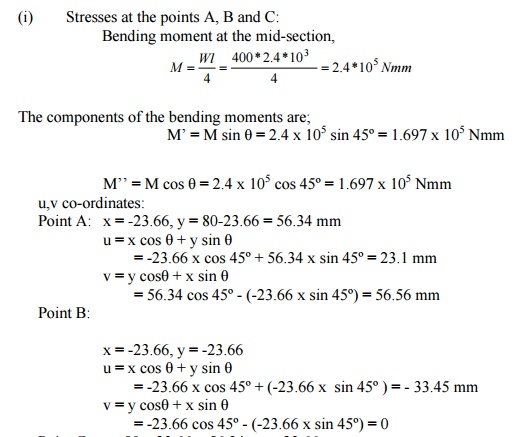 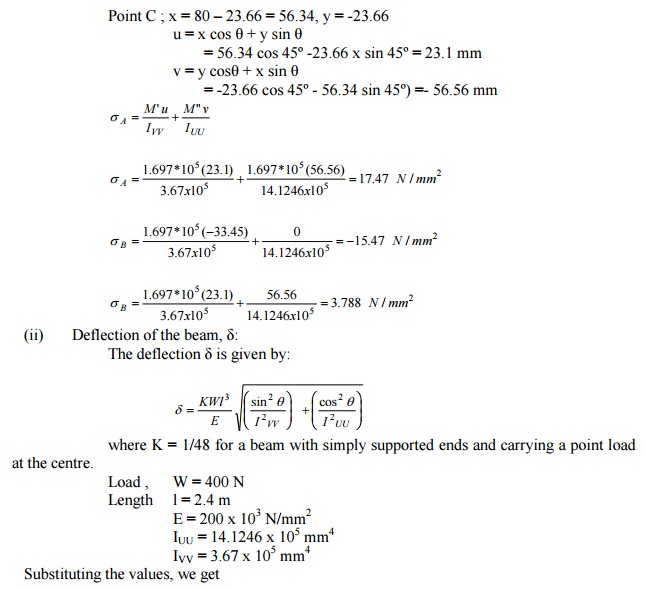 10 STATE THE PARALLEL AXES AND PRINCIPAL MOMENT OF INERTIA

The term stress gradient is used to indicate the rate of increase of stress as a stress  raiser is approached. These localized stresses are called stress concentration.

It is defined as the ratio of the maximum stress to the nominal stress.

Value of q ranges from zero to one.

15 EXPLAIN THE POSITION OF SHEAR CENTRE IN VARIOUS SECTIONS

(i) In case of a beam having two axes of symmetry, the shear centre coincides with the centroid.

16 STATE THE PRINCIPLES INVOLVED IN LOCATING THE SHEAR CENTRE

The principle involved in locating the shear centre for a cross -section of a beam is that the loads acting on the beam must lie in a plane which contains the resultant shear  force on each cross-section of the beam as computed from the shearing stresses.

17 STATE THE STRESSES DUE TO UNSYMMETRICAL BENDING

?b = bending stress in the curved bar

M = moment due to the load applied

IUU = Principal moment of inertia in the principal axes UU

I VV = Principal moment of inertia in the principal axes VV

Fatigue is defined as the failure of a material under varying loads, well below the ultimate static load, after a finite number of cycles of loading and unloading.

(a) Fluctuating or alternating stress

20 STATE THE REASONS FOR STRESS- CONCENTRATION

(i) discontinuities in continuum

Creep can be defined as the slow and progressive deformation of a material with  time under a constant stress.