A steam turbine converts the energy of high-pressure, high temperature steam produced by a steam generator into shaft work.

A steam turbine converts the energy of high-pressure, high temperature steam produced by a steam generator into shaft work. The energy conversion is brought about in the following ways:

1.     The high-pressure, high-temperature steam first expands in the nozzles emanates as a high velocity fluid stream.

2.     The high velocity steam coming out of the nozzles impinges on the blades mounted on a wheel. The fluid stream suffers a loss of momentum while flowing past the blades that is absorbed by the rotating wheel entailing production of torque.

3.     The moving blades move as a result of the impulse of steam (caused by the change of momentum) and also as a result of expansion and acceleration of the steam relative to them. In other words they also act as the nozzles.

Ø A nozzle is a duct that increases the velocity of the flowing fluid at the expense of pressure drop.

Ø  A duct which decreases the velocity of a fluid and causes a corresponding increase in pressure is a diffuser .

Ø The same duct may be either a nozzle or a diffuser depending upon the end conditions across it. If the cross-section of a duct decreases gradually from inlet to exit, the duct is said to be convergent.

Ø Conversely if the cross section increases gradually from the inlet to exit, the duct is said to be divergent.

Ø  If the cross-section initially decreases and then increases, the duct is called a convergent-divergent nozzle.

Ø The minimum cross-section of such ducts is known as throat.

Ø  A fluid is said to be compressible if its density changes with the change in pressure brought about by the flow.

Ø If the density does not changes or changes very little, the fluid is said to be incompressible. Usually the gases and vapors are compressible, whereas liquids are incompressible . 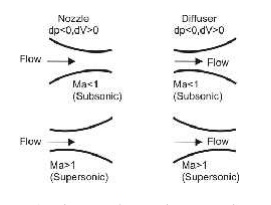