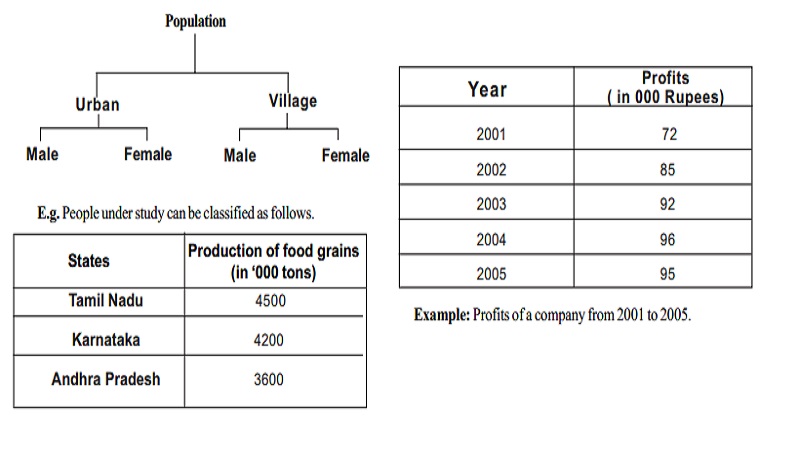 There are four types of classification. They are

When data are classified on the basis of location or areas, it is called geographical classification

Example: Classification of production of food grains in different states in India.

In Qualitative classification, data are classified on the basis of some attributes or quality such as sex, colour of hair, literacy and religion. In this type of classification, the attribute under study cannot be measured. It can only be found out whether it is present or absent in the units of study.

Example: The students of a school may be classified according to the weight as follows

There are two types of quantitative classification of data. They are

Variable refers to the characteristic that varies in magnitude or quantity. E.g. weight of the students. A variable may be discrete or continuous.

A discrete variable can take only certain specific values that are whole numbers (integers). E.g. Number of children in a family or Number of class rooms in a school.

A Continuous variable can take any numerical value within a specific interval.

Example: the average weight of a particular class student is between 60 and 80 kgs.

Frequency refers to the number of times each variable gets repeated.

Frequency distribution refers to data classified on the basis of some variable that can be measured such as prices, weight, height, wages etc.

Class frequency: The number of observations corresponding to a particular class is known as the frequency of that class

(iv) Class mid-point: Mid point of a class is formed out as follows.

A table is a systematic arrangement of statistical data in columns and rows. Rows are horizontal arrangements whereas the columns are vertical ones.