This section describes the basic constraints that can be specified in SQL as part of table creation. These include key and referential integrity constraints, restrictions on attribute domains and NULLs, and constraints on individual tuples within a rela-tion. We discuss the specification of more general constraints, called assertions, in Chapter 5.

Because SQL allows NULLs as attribute values, a constraint NOT NULL may be specified if NULL is not permitted for a particular attribute. This is always implicitly specified for the attributes that are part of the primary key of each relation, but it can be specified for any other attributes whose values are required not to be NULL, as shown in Figure 4.1.

Another type of constraint can restrict attribute or domain values using the CHECK clause following an attribute or domain definition.6 For example, suppose that department numbers are restricted to integer numbers between 1 and 20; then, we can change the attribute declaration of Dnumber in the DEPARTMENT table (see Figure 4.1) to the following: 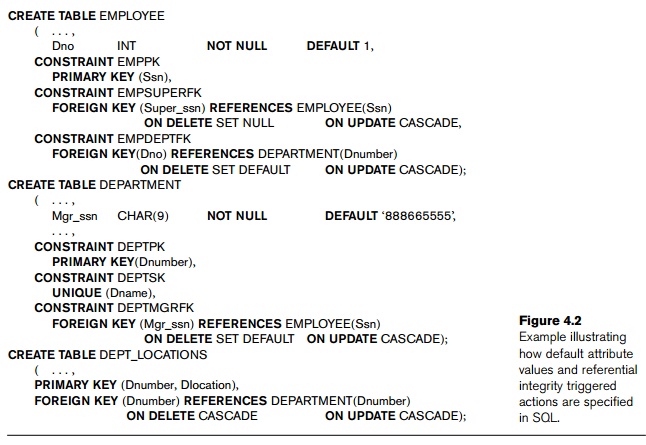 The CHECK clause can also be used in conjunction with the CREATE DOMAIN state-ment. For example, we can write the following statement:

We can then use the created domain D_NUM as the attribute type for all attributes that refer to department numbers in Figure 4.1, such as Dnumber of DEPARTMENT,

Dnum of PROJECT, Dno of EMPLOYEE, and so on.

Because keys and referential integrity constraints are very important, there are special clauses within the CREATE TABLE statement to specify them. Some examples to illustrate the specification of keys and referential integrity are shown in Figure 4.1. The PRIMARY KEY clause specifies one or more attributes that make up the primary key of a relation. If a primary key has a single attribute, the clause can follow the attribute directly. For example, the primary key of DEPARTMENT can be specified as follows (instead of the way it is specified in Figure 4.1):

Referential integrity is specified via the FOREIGN KEY clause, as shown in Figure 4.1. As we discussed in Section 3.2.4, a referential integrity constraint can be violated when tuples are inserted or deleted, or when a foreign key or primary key attribute value is modified. The default action that SQL takes for an integrity violation is to reject the update operation that will cause a violation, which is known as the RESTRICT option. However, the schema designer can specify an alternative action to be taken by attaching a referential triggered action clause to any foreign key constraint. The options include SET NULL, CASCADE, and SET DEFAULT. An option must be qualified with either ON DELETE or ON UPDATE. We illustrate this with the examples shown in Figure 4.2. Here, the database designer chooses ON DELETE SET NULL and ON UPDATE CASCADE for the foreign key Super_ssn of

In general, the action taken by the DBMS for SET NULL or SET DEFAULT is the same for both ON DELETE and ON UPDATE: The value of the affected referencing attrib-utes is changed to NULL for SET NULL and to the specified default value of the refer-encing attribute for SET DEFAULT. The action for CASCADE ON DELETE is to delete all the referencing tuples, whereas the action for CASCADE ON UPDATE is to change the value of the referencing foreign key attribute(s) to the updated (new) primary key value for all the referencing tuples. It is the responsibility of the database designer to choose the appropriate action and to specify it in the database schema. As a general rule, the CASCADE option is suitable for “relationship” relations (see Section 9.1), such as WORKS_ON; for relations that represent multivalued attrib-utes, such as DEPT_LOCATIONS; and for relations that represent weak entity types, such as DEPENDENT.

In addition to key and referential integrity constraints, which are specified by special keywords, other table constraints can be specified through additional CHECK clauses at the end of a CREATE TABLE statement. These can be called tuple-based constraints because they apply to each tuple individually and are checked whenever a tuple is inserted or modified. For example, suppose that the DEPARTMENT table in Figure 4.1 had an additional attribute Dept_create_date, which stores the date when the department was created. Then we could add the following CHECK clause at the end of the CREATE TABLE statement for the DEPARTMENT table to make sure that a manager’s start date is later than the department creation date.

The CHECK clause can also be used to specify more general constraints using the CREATE ASSERTION statement of SQL. We discuss this in Chapter 5 because it requires the full power of queries, which are discussed in Sections 4.3 and 5.1.