Large Spatial Field of Excitation of the Dendrites. The den-drites of the anterior motor neurons often extend 500 to 1000 micrometers in all directions from the neuronal soma.

Large Spatial Field of Excitation of the Dendrites. The den-drites of the anterior motor neurons often extend 500 to 1000 micrometers in all directions from the neuronal soma. And these dendrites can receive signals from a large spatial area around the motor neuron. This provides a vast opportunity for summation of signals from many separate presynaptic nerve fibers.

It is also important that between 80 and 95 per cent of all the presynaptic terminals of the anterior motor neuron terminate on dendrites, in contrast to only 5 to 20 per cent terminating on the neuronal soma. There-fore, the preponderant share of the excitation is pro-vided by signals transmitted by way of the dendrites.

Most Dendrites Cannot Transmit Action Potentials—But They Can Transmit Signals Within the Same Neuron by Electrotonic Conduction. Most dendrites fail to transmit actionpotentials because their membranes have relatively few voltage-gated sodium channels, and their thresh-olds for excitation are too high for action potentials to occur. Yet they do transmit electrotonic current down the dendrites to the soma. Transmission of electrotonic current means direct spread of electrical current by ion conduction in the fluids of the dendrites but without generation of action potentials. Stimulation (or inhibi-tion) of the neuron by this current has special charac-teristics, as follows.

Decrement of Electrotonic Conduction in the Den-drites—Greater Excitatory (or Inhibitory) Effect by Synapses Located Near the Soma. In Figure 45–11,multiple excitatory and inhibitory synapses are shown stimulating the dendrites of a neuron. On the two den-drites to the left, there are excitatory effects near the tip ends; note the high levels of excitatory postsynap-tic potentials at these ends—that is, note the less neg-ative membrane potentials at these points. However, a 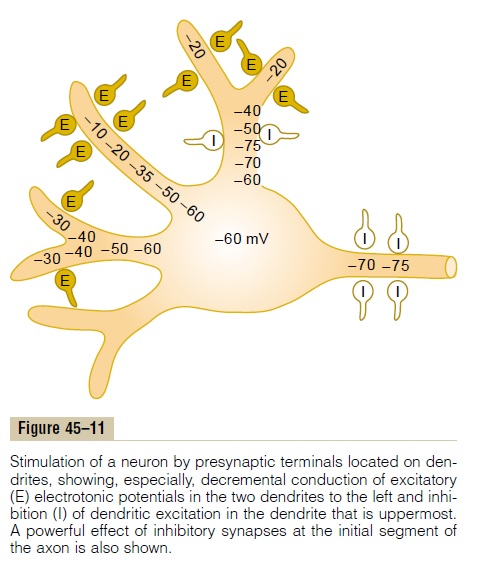 large share of the excitatory postsynaptic potential is lost before it reaches the soma. The reason is that the dendrites are long, and their membranes are thin and at least partially permeable to potassium and chloride ions, making them “leaky” to electric current. There-fore, before the excitatory potentials can reach the soma, a large share of the potential is lost by leakage through the membrane. This decrease in membrane potential as it spreads electrotonically along dendrites toward the soma is called decremental conduction.

The farther the excitatory synapse is from the soma of the neuron, the greater will be the decrement, and the less will be excitatory signal reaching the soma. Therefore, those synapses that lie near the soma have far more effect in causing neuron excitation or inhibi-tion than those that lie far away from the soma.

Summation of Excitation and Inhibition in Dendrites. Theuppermost dendrite of Figure 45–11 is shown to be stimulated by both excitatory and inhibitory synapses. At the tip of the dendrite is a strong excitatory post-synaptic potential, but nearer the soma are two inhibitory synapses acting on the same dendrite. These inhibitory synapses provide a hyperpolarizing voltage that completely nullifies the excitatory effect and indeed transmits a small amount of inhibition by elec-trotonic conduction toward the soma. Thus, dendrites can summate excitatory and inhibitory postsynaptic potentials in the same way that the soma can. Also shown in the figure are several inhibitory synapses located directly on the axon hillock and initial axon segment. This location provides especially powerful inhibition because it has the direct effect of increasing the threshold for excitation at the very point where the action potential is normally generated.