The Smith Chart is a fantastic tool for visualizing the impedance of a transmission line and antenna system as a function of frequency.

The Smith Chart is shown in Figure 1. A larger version is shown here. 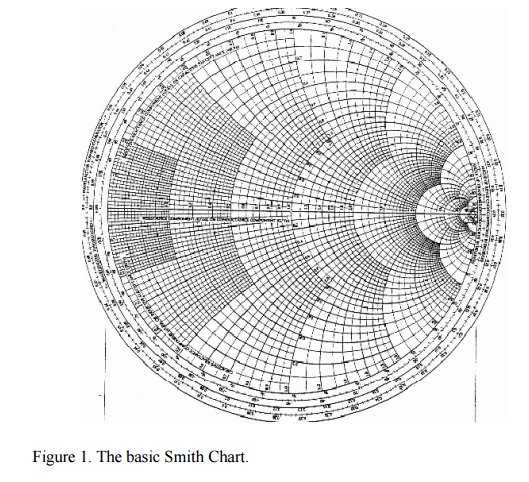 Figure 1 should look a little intimidating, as it appears to be lines going everywhere. There is nothing to fear though. We will build up the Smith Chart from scratch, so that you can understand exactly what all of the lines mean. In fact, we are going to learn an even more complicated version of the Smith Chart known as the immitance Smith Chart, which is twice as complicated, but also twice as useful. But for now, just admire the Smith Chart and its curvy elegance. This section of the antenna theory site will present an intro to the Smith Chart basics.

The Smith Chart displays the complex reflection coefficient, in polar form, for an arbitrary impedance (we'll call the impedance ZL or the load impedance).

For a primer on complex math, click here. Recall that the complex reflection coefficient () for an impedance ZL attached to a transmission line with characteristic impedance Z0 is given by

For this tutorial, we will assume Z0 is 50 Ohms, which is often, but not always the case. The complex reflection coefficient, or , must have a magnitude between 0 and 1.

As such, the set of all possible values for must lie within the unit circle: 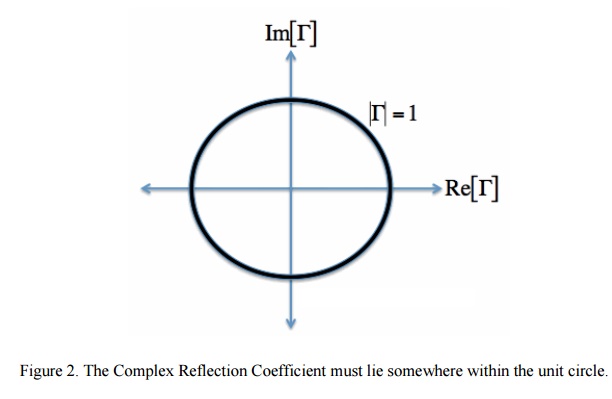 In Figure 2, plotting the set of all values for the complex reflection coefficient, along the real and imaginary axis. The center of the Smith Chart is the point where the reflection coefficient is zero. That is, this is the only point on the smith chart where no power is reflected by the load impedance.

The outter ring of the Smith Chart is where the magnitude of is equal to 1. This is the black circle in Figure 1. Along this curve, all of the power is reflected by the load impedance.

To make the Smith Chart more general and independent of the characteristic impedance Z0 of the transmission line, we will normalize the load impedance ZL by Z0 for all future plots:

Equation [1] doesn't affect the reflection coefficient tow. It is just a convention that is used everywhere. 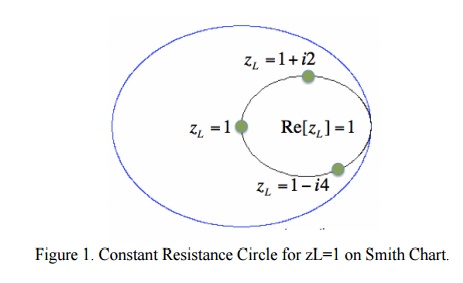 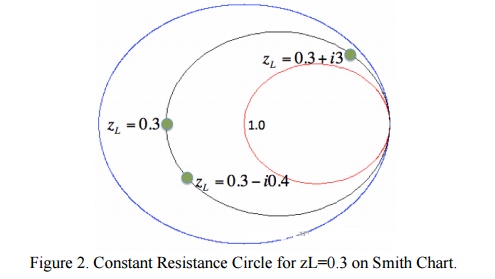 In Figure 2, the black ring represents the set of all impedances where the real part of z2 equals 0.3. A few points along the circle are plotted. We've left the resistance circle of 1.0 in red on the Smith Chart. These circles are called constant resistance curves. The real part of the load impedance is constant along each of these curves. We'll now add several values for the constant resistance, as shown in Figure 3: 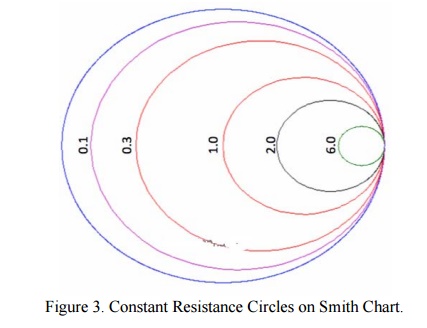 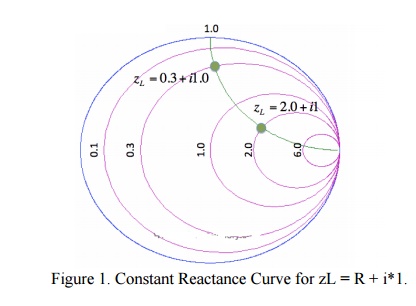 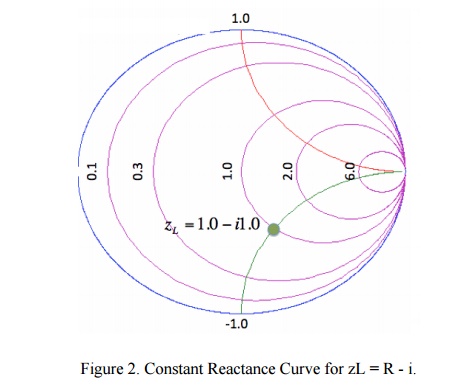 The resulting curve for Im[zL]=-1 is plotted in green in Figure 2. The point zL=1-i is placed on the Smith Chart, which is at the intersection of the Re[zL]=1 circle and the Im[zL]=-1 curve.

An important curve is given by Im[zL]=0. That is, the set of all impedances given by zL = R, where the imaginary part is zero and the real part (the resistance) is greater than or equal to zero. The result is shown in Figure 3: 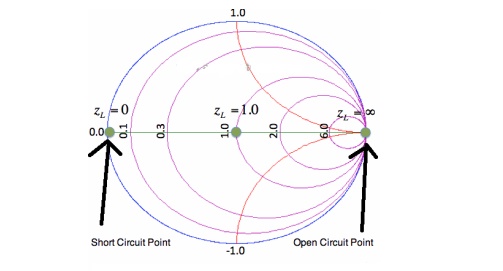 Figure 3. Constant Reactance Curve for zL=R. The reactance curve given by Im[zL]=0 is a straight line across the Smith Chart. There are 3 special points along this curve. On the far left, where zL = 0 + i0, this is the point where the load is a short circuit, and thus the magnitude of is 1, so all power is reflected. In the center of the Smith Chart, we have the point given by zL = 1. At this location, is 0, so the load is exactly matched to the transmission line. No power is reflected at this point.

The point on the far right in Figure 3 is given by zL = infinity. This is the open circuit location. Again, the magnitude of is 1, so all power is reflected at this point, as expected. Finally, we'll add a bunch of constant reactance curves on the Smith Chart, as shown in Figure 4. 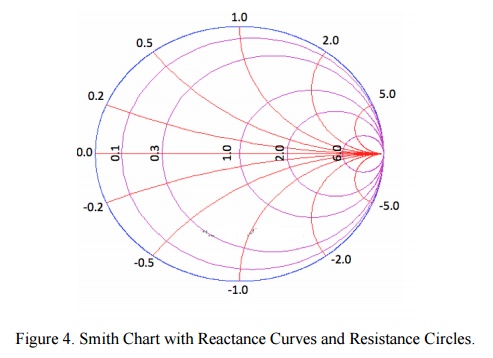 Measurement of input impedance of the line

• It is used to find the input impendence and input admittance of the line.

•  The smith chart may also be used for lossy lines and the locus of points on a line then follows a spiral path towards the chart center, due to attenuation.

(i). The 0.1λ length line shown has a characteristic impedance of 50 and is terminated with a load impedance of ZL = 5+j25.

Find VSWR = Zmax = 13 on the horizontal line to the rightof the chart's center. Or use the SWR scale on the chart.

From the reflection coefficient scale below the chart, 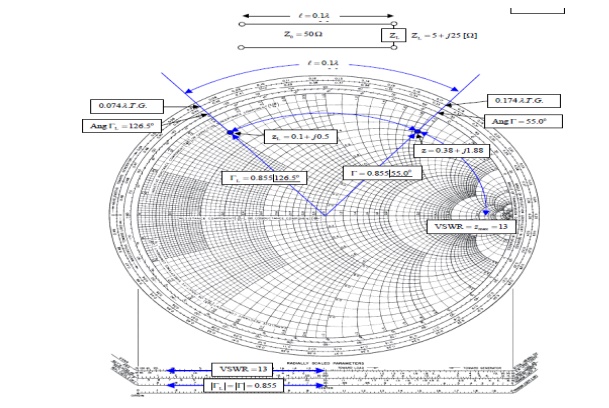 From the intersection of the constant reflection coefficient circle with the right hand side of the horizontal axis, read VSWR= zmax = 5.3.

(c)  How far from the load is the first voltage minimum? 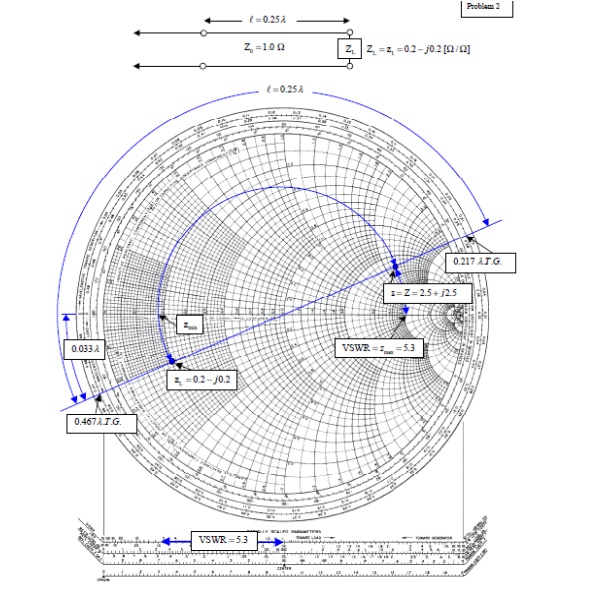 (a) Voltage minima at 9.2 cm and 12.4 cm measured away from the load with the line terminated in a short.

(b) VSWR = 5.1 with the line terminated in the unknown load; a voltage minimum is located 11.6 cm measured away from the load.

What is the normalized line impedance?

Note that this data could have come from either a waveguide or a TEM line measurement. If the transmission system is a waveguide, then the wavelength used is actually the guide wavelength. From the voltage minima on the shorted line, the (guide) wavelength may be determined:

toward the generator. Locate the reflection coefficient magnitude circle by its intersection with zmax = VSWR = 5:1 on the horizontal axis. Then from the voltage minimum opposite zmax, move 0.125 λg toward the generator to find a position an integral number of half-wavelengths from the load. The impedance there is the same as that of the load, zL = 0.38 +j0.93. Alternatively, move 0.5 λg – 0.125 λg = 0.375 λg toward the load to locate the same value. 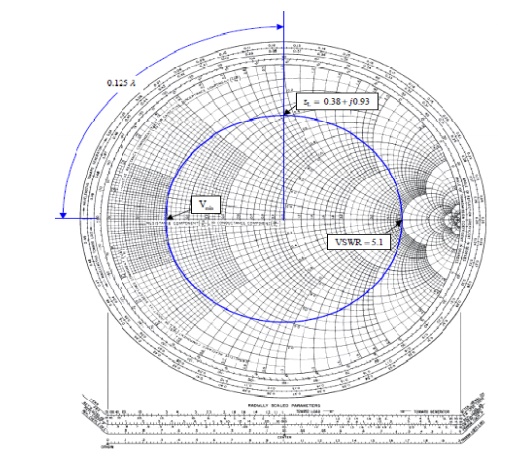