Chapter: Health Management in Aquaculture: Environmental and other non-infectious diseases

Affected shrimp show opaque white areas on the abdomen (Fig. 6-3); blacken-ing on the edges of the uropod followed by erosion and liquid-filled boils at the tip of uropods in advanced stages; “wood grain” appearance of abdominal muscle in postlarvae (Fig. 6-4). 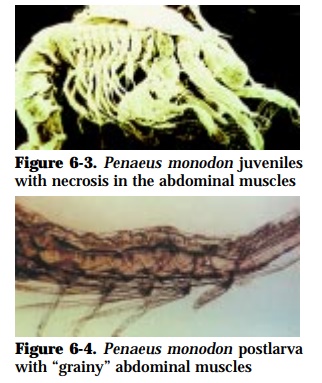 There is a gradual death of cells of affected parts leading to erosion especially in the tail. This may then serve as portal of entry for secondary systemic bacte-rial infection.

Bent/cramped tails or body cramp in shrimps is associated with handling of shrimp in warm, humid air much warmer than culture water, and mineral imbalance.

Affected shrimps have partial or complete rigid flexure of the tail (Fig. 6-5). 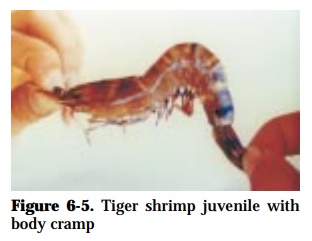 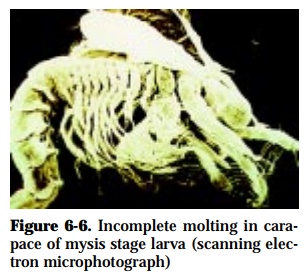 Abnormal swimming movement which could lead to easy predation and mor-tality.

Prolonged respiratory distress leads to death and sublethal levels may cause impairment of metabolism resulting in growth retardation.

Acidosis is caused by low water and soil pH 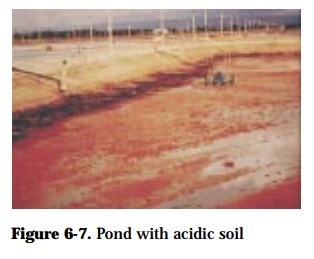 •     Apply lime and flush the ponds before stocking 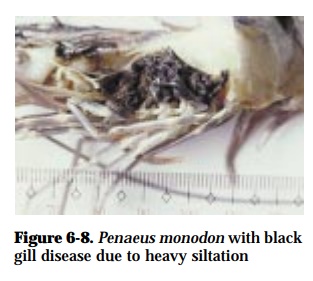 Histological observations show that blackening of the gills may be due to the deposition of melanin at sites of tissue necrosis and heavy hemocyte activity.

Red disease in shrimps is associated with high application of lime (2-6 tons/ha) in the pond that gives it a high initial pH; prolonged exposure to low salinity (6-15 ppt).

Affected shrimps have red short streaks on gills or abdominal segments, yel-lowish to reddish discoloration of the body (Fig. 6-9) and increased fluid in the cephalothorax, emitting foul odor. 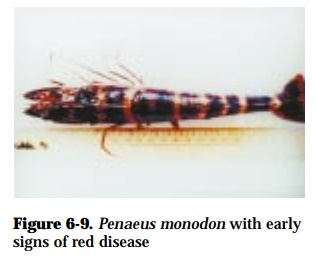 Yellow to red discoloration in affected shrimps; histopathology of the hepato-pancreas shows hemocytic infiltration in the spaces between the tubules; more advanced lesions are in the form of fibriotic and melanized encapsulation of necrotic tissues, either in the tubule itself or the sinuses around it.

Chronic soft-shell syndrome is associated with exposure of normal hard-shelled Soft-Shelling    shrimps to pesticides and piscicides. Aquatin at 0.0154 - 1.54 ppm, GusathionA at 1.5 - 150 ppb, rotenone at 10-50 ppm, and saponin at 100 ppm for 4 days can induce soft-shelling in initially hard-shelled stocks.

Shell is thin and persistently soft for several weeks, shell surface is often dark rough and wrinkled, and affected shrimps are weak. The disease must not be confused with the condition of newly-molted shrimps, which have clean smooth, and soft shells that harden within 1-2 days.

Affected shrimps are soft-shelled, grow slowly, and eventually die; histopathol-ogy of shrimps exposed to Gusathion A shows slight hyperplasia of the gill epithelium, delamination of the cells lining the tubules of the hepatopancreas, and general necrosis and degeneration of these tissues.