Selection of Power Rating of Motors

SELECTION OF POWER RATING OF MOTORS

From the point of view of motor rating for various duty cycles in section 1.6 can be broadly classified as:

If the motor has load torque of T N-m and it is running at w radians/seconds, if efficiency in h , then power rating of the motor is

Power rating is calculated and then a motor with next higher power rating from commercially available rating is selected.

v        The operating temperature of a motor should never exceed the maximum permissible temperature, because it will result in deterioration and breakdown of insulation and will shorten the service life of motors.

v        It is general practice to base the motor power ratings on a standard value of temperature, say 35o c.

v        Accordingly, the power given on the name plate of a motor corresponds to the power which the motor is capable of delivering without overheating at an ambient temperature of 35 c. the duty cycle is closely related to temperature and is generally taken to include the environmental factors also.

v        The rating of a machine can be determined from heating considerations.

v        However the motor so selected should be checked for its overload capacity and starting torque.

v        The majority of electric machines used in drives operate continuously at a constant or only slightly variable load.

v        In many applications, the power input required for a motor is not known before hand and therefore certain difficulties arise in such cases.

v        For the determination of ratings of machines whose load characteristics have not been thoroughly studied, it becomes necessary to determine the load diagram i.e., diagram shown the variation of power output versus time.

The temperature of the motor changes continuously when the load is variable. On account of this, it becomes difficult to select the motor rating as per heating.

v        The analytical study of heating becomes highly complicated if the load diagram is irregular in shape or when it has a large number of steps.

On the other hand it is not correct to select the motor according to the lowest or highest load because the motor would be overloaded in the first case and under loaded in the second case. Therefore it becomes necessary to adopt suitable methods for the determination of motor ratings.

The four commonly used methods are:

Ø            The method consists of finding average losses Q av in the motor when it operates according to the given load diagram.

Ø These losses are then compared with the Q , the losses corresponding to the continuous duty of the machine when operated at its normal rating.

Ø The method of average losses presupposes that when Q av = Q nomn , the motor will operate without temperature rise going above the maximum permissible for the particular class of insulation.

v             The losses of the motor are calculated for each portion of the load diagram by referring to the efficiency curve of the motor. 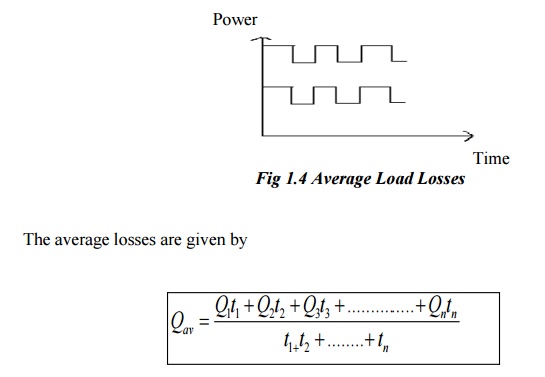 v        In case ,the two losses are equal or differ by a small amount ,the motor is selected .if the losses differ considerably ,another motor is selected and the calculations repeated till a motor having almost the same losses as the average losses is found.

v        Iit should be checked that the motor selected has a sufficient overload capacity and starting torque.

v        The method of average losses dopes not take into account, the maximum temperature rise under variable load conditions .However, this method is accurate and reliable for determining the average temperature rise of the motor during one work cycle.

The disadvantage of this method is that it is tedious to work with and also many a times the efficiency curve is not readily available and the efficiency has to be calculated by means of empirical formula which may not be accurate.

The machine selected should also be checked for its overload capacity,

If the over load capacity of the motor selected is not sufficient, it becomes necessary to select a motor of higher power rating. 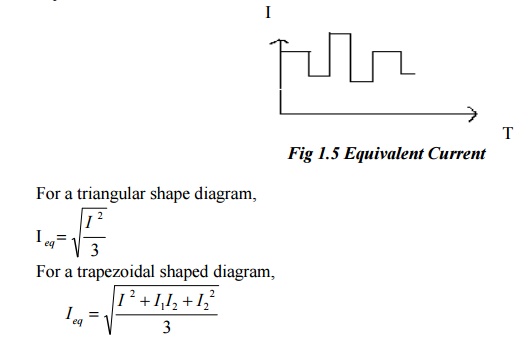 The above method allows the equivalent current values to be calculated with accuracy sufficient for practical purposes.

The equation for equivalent power method, power is directly proportional to torque.

At constant speed or where the changes in speed are small, the equivalent power is given by the following relationship,

qm =maximum permissible temperature which the motor running on short time rating will reach if run continuously at that rating.

If it is assumed that the temperature rise is proportional to losses corresponding to the rating of the motor.