Prescription medications for patients suffering from insomnia gen-erally should be used only on a short-term basis.

Prescription medications for patients suffering from insomnia gen-erally should be used only on a short-term basis. Benzodiazepines replaced barbiturates as the mainstay of treatment for much of the past 30 years. Benzodiazepines have a decreased abuse potential, fewer interactions with other drugs, a broader therapeutic index compared with the barbiturates, and pose a much lower risk in overdose. The adverse effect profile of benzodiazepines includes the risk for abuse and physiological dependence that develops with daily use, as well as problems with daytime sedation, motor incoordination and cognitive impairment. More recently the imi-dazopyridine, zolpidem and the pyrazolopyrimidine, zaleplon, have become increasingly popular as daytime sedation and the risk for abuse and physiological dependence appear to be some-what less frequent with these two agents. 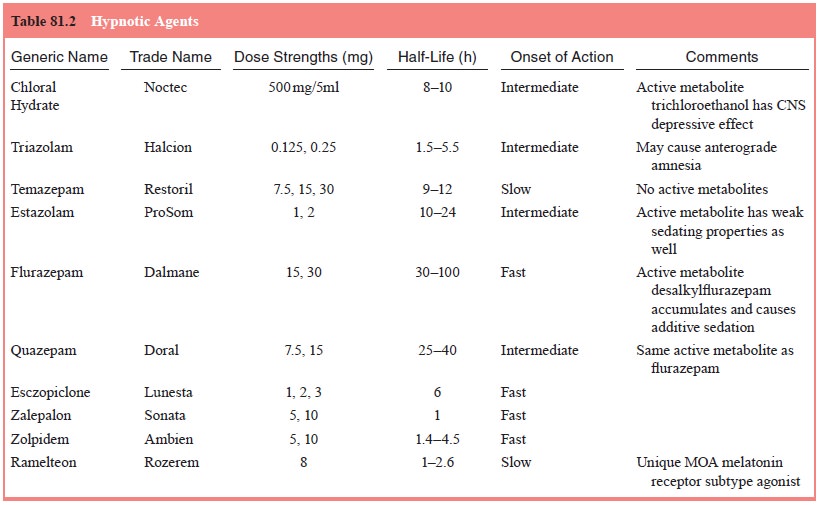 Benzodiazepines are central nervous system depressants. Their likely mechanism of action relates to their ability to aug-ment the opening of neuronal gamma-aminobutyric acid receptor-related chloride channels. By modulating the effects of gamma-aminobutyric acid, benzodiazepines increase the frequency of chloride channel openings. This effect is in contrast to the effects of barbiturates or alcohol, which seem to increase the duration of chloride channel opening. While this distinction may appear minor, it accounts for the greater safety of benzodiazepines in overdose (i.e., there is less likelihood of respiratory depression or coma). When alcohol is mixed with a benzodiazepine overdose, the synergistic effects of respiratory depression can have poten-tially fatal consequences.

Shorter half-life benzodiazepine hypnotics cause less daytime sedation and residual cognitive affects the day follow-ing administration. Rebound insomnia often occurs with these agents, however, especially after use for several consecutive nights. Rebound insomnia can usually be avoided by taper-ing the dose or using lower dosages during treatment. There is some evidence to suggest that the likelihood of rebound in-somnia is greater in patients who experience greater hypnotic efficacy.

Besides rebound insomnia, some patients receiving shorter half-life benzodiazepines have problems with middle or terminal insomnia. Plasma levels are quite low several hours after tak-ing these medications and, as a result, if there is a problem with sleep maintenance these agents are not as likely to be as helpful as hypnotics with longer half-lives. In addition, shorter half-life benzodiazepines can sometimes cause an increase in daytime anxiety, particularly in the morning. For at least some patients, this may reflect the development of physiologic dependence and a withdrawal phenomenon.

Longer half-life benzodiazepines may be more appropri-ate for patients who suffer from middle or terminal insomnia since these agents retain significant sedative properties for many hours after initial administration. Some patients may have problems with daytime sedation or decreased reaction time the day following administration. Sedative agents such as flurazepam and quazepam that have active metabolites with long half-lives are particularly prone to causing such problems. The active metabolite often builds up over time causing an in-crease in daytime drowsiness, decreased reaction time and in coordination with repeated administration, particularly in the elderly. Patients with significant daytime anxiety may benefit from the longer acting benzodiazepines as the residual amount of medication left in the morning may still have anxiolytic benefits.

Drug interactions with benzodiazepines are quite com-mon. When mixed with other sedating compounds the effects are additive. Narcotic medications, alcohol and antihistamines are examples where the additive sedation can lead to confusion quite easily. In addition, acute alcohol ingestion slows hepatic metabolism and causes transiently higher concentrations of oxidatively metabolized benzodiazepines leading to further se-dation. Antacids that slow gastric emptying may decrease the rate of absorption of a hypnotic agent from its primary site of origin, the small intestine. This could alter both onset and peak concentration effects.

Benzodiazepines all undergo some form of hepatic metab-olism, although some agents are much more extensively metabo-lized than others. Medications that inhibit hepatic microsomal oxidative metabolism may cause clinically meaningful drug in-teractions when combined with benzodiazepines. All currently available triazolobenzodiazepines (e.g., alprazolam, estazolam, midazolam, triazolam) and diazepam are metabolized by hepatic microsomes and are complete or partial substrates of the CYP 3A4 isoform. Medications that are potent inhibitors of this system will cause higher peak concentrations of the triazolobenzodiazepine, particularly triazolam, which is highly hepatically metabolized. Nefazodone, ketaconazole, cimetidine and macrolide antibiotics are examples of clinically relevant CYP 3A4 inhibitors which may cause a reduction in the clearance of these triazolobenzodi-azepines and an increase in their blood and brain concentrations. This increase is greatest with higher hepatic clearance drugs such as triazolam or midazolam and somewhat less for drugs such as alprazolam or estazolam.

All benzodiazepine hypnotic agents are FDA Pregnancy Category X, meaning their use should be avoided during preg-nancy, especially during the first trimester due to an increased risk of congenital malformations. A variety of congenital malfor-mations, including cleft palate, delayed ossification of a number of bony structures and an increased occurrence of rudimentary ribs have been reported.

Benzodiazepines must be used in patients with obstructive sleep apnea only with extreme caution. Benzodiazepines may cause respiratory depression and can render patients less likely to mount an appropriate respiratory response to hypoxia. Hypnotic agents such as zolpidem, zaleplon, or trazodone are less likely to cause problems for sleep apnea patients and may be preferable alternatives. Aggressive evaluation and treatment of sleep apnea [e.g., (continuous positive airway pressure) CPAP] is extremely important to ensure adequate restorative sleep.

Chloral hydrate was among the earliest sleeping pills. Its sedating qualities become evident within 30 minutes of adminis-tration, as it is rapidly absorbed from the gastrointestinal tract. At dosages between 0.5 and 1.5 g, it is an effective hypnotic agent. The elimination half-life of its active metabolite, trichloroetha-nol, is 6 to 8 hours, rendering it unlikely to cause significant next-day sedation or functional impairment. Despite the potential ben-efits of a rapid onset of action and relatively short elimination half-life, chloral hydrate is rarely used as a hypnotic agent today. It has a narrow therapeutic index (toxic dose–therapeutic dose), causes gastric irritation, nausea and vomiting easily, and may cause gastric necrosis at high doses. Overdose can be fatal due to respiratory depression.

Zolpidem is also a nonbenzodiazepine hypnotic. A member of the imidazopyridine class, it is available in 5 and 10 mg dosages. Its mechanism of action shares much in common with benzo-diazepines as it is active at central benzodiazepine (sometimes called ω) receptors. The ω receptor is a subunit of the GABAAreceptor. Benzodiazepines are thought to bind nonselectively and activate all ω receptor subtypes; by contrast, zolpidem ap-pears to bind preferentially to ω1 receptors. Although this selec-tive binding is not absolute, it may explain the relative absence of myorelaxant, anxiolytic and anticonvulsant effects of zolpidem at hypnotic dose, as well as the preservation of stages 3 and 4 sleep. Polysomnographic experience with zolpidem indicates that zolpi-dem induces a sleep pattern very similar to that of physiological sleep, and generally produces little effect on sleep architecture following abrupt discontinuation (Darcourt et al., 1999).

Zolpidem is rapidly absorbed through the gastrointestinal tract and has a rapid onset of action. Peak concentration occurs from 30 minutes to 2 hours following administration. It is me-tabolized in the liver to several inactive metabolites and has an elimination half-life of approximately 2.5 hours. The elimination half-life is prolonged in the elderly and in patients with impaired hepatic or renal function. Zolpidem overdose can cause respira-tory depression or coma, especially when combined with other CNS depressants. The benzodiazepine antagonist flumazenil can reverse the effects of an overdose of zolpidem, reflecting its ben-zodiazepine-like mechanism of action.

Although zolpidem is classified as a schedule IV drug by the FDA, it appears to cause tolerance and withdrawal syn-dromes somewhat less frequently than benzodiazepine hypnotics do. Withdrawal symptoms occur more frequently at doses higher than listed in the Physician’s Desk Reference (PDR), which rec-ommends a maximum dose of 10 mg. Cross tolerance with al-cohol and benzodiazepines are found at higher doses, and the incidence of adverse effects is much higher. Anecdotal reports of hallucinations and confusion at standard hypnotic dosages have been reported (Toner et al., 1999, Ansseau et al., 1992), but fur-ther research is needed to determine the prevalence of such oc-currences across a spectrum of dosages and age groups.

Zaleplon is a nonbenzodiazepine hypnotic of the pyrazolopyrimi-dine class. Like zolpidem, zaleplon binds preferentially to central benzodiazepine (or ω) receptors. Zaleplon binds to the ω1, ω2 and ω3 subunits, while zolpidem bind only to the ω1 subunit. Zaleplon is rapidly absorbed from the gastrointestinal tract, reaching peak serum concentrations within 1 hour. Absolute bioavailability is only 30% as it undergoes extensive hepatic first-pass metabolism. Its elimination half-life is approximately 1 hour. Since cimeti-dine inhibits aldehyde oxidase and CYP 3A4, and may increase zaleplon plasma concentrations by 85%, the initial starting dose of zaleplon should be halved in patients also taking cimetidine. Other potent inhibitors of the CYP 3A4 system such as ketocona-zole and erythromycin also may increase zaleplon levels.

Because of the quick onset of action of zaleplon and its short elimination half-life, it can be used for patients who have a difficult time initiating sleep, but are able to remain asleep throughout the remainder of the night. In patients who have dif-ficulty both in initiating and in maintaining sleep, zaleplon may permit the initiation of sleep, but be less effective in maintaining sleep due to its short elimination half-life. On the other hand, this same short half-life can be an advantage, as it can permit middle of the night dosing for those patients who awaken then. The short half-life permits such a dosing schedule without causing signifi-cant next-day sedation (Walsh et al., 2000).

Zaleplon, like zolpidem, is classified as a schedule IV drug by the FDA. Higher than standard dosages have been associated with an abuse potential similar to that of triazolam. With dosages of 20 mg or less, abuse and dependence appears to be signifi-cantly less than that of benzodiazepine hypnotic agents (Rush et al., 1999). Rebound insomnia has been reported, but it appears to occur less frequently than in the short acting benzodiazepines such as triazolam.

Barbiturates are commonly prescribed outside the USA for in-somnia. Butabarbital, phenobarbital and secobarbital are the most commonly prescribed barbiturates. The barbiturates are poten-tially lethal in overdose due to the risk of respiratory depression, and they commonly cause induction of hepatic oxidative metabo-lism. Their use has generally been replaced by other agents with better side-effect profiles such as the benzodiazepines, the ima-dazopyridines and the pyrazolopyrimidines.

Hydroxyzine hydrochloride and hydroxyzine pamoate are sedating H1 receptor antagonists that are used occasionally as hypnotic agents. Sedation occurs with these agents due to inhi-bition of histamine N-methyltransferase and blockage of central histaminergic receptors. Next-day sedation is a common problem with antihistamines as they have a relatively long elimination half-life. These agents are highly anticholinergic and may cause hypotension and are not usually recommended as first-line agents for the treatment of insomnia.

Trazodone, a triazolopyridine compound marketed as an antidepressant, is frequently used as a hypnotic. Hypnotic dos-ages vary markedly, from 25 to 300 mg, depending on individual susceptibility to its sedating effects. Trazodone increases slow wave sleep and total sleep time and does not appear to affect REM sleep, unlike other antidepressants (Yamadera et al., 1998). Its elimination half-life of between 6 and 9 hours renders trazo-done likely to cause daytime drowsiness. Using the lowest effec-tive dosage can minimize this effect, as taking the medication in late evening rather than at bedtime. Trazodone is commonly used to counter the insomnia associated with SSRI use. It is rarely used as a sole antidepressant because of its strong sedat-ing qualities and the need to take the medication more than once per day because of its half-life. Tolerance to its sedating effects develops only rarely with long-term use, making it an excellent option for those with chronic insomnia. Priapism is an exceed-ingly rare side effect, occurring in less than one in 40 000 cases. Since anticholinergic side effects and postural hypotension are not common, trazodone has some advantages over the tricyclic antidepressants.