Security monitoring is the on line identification of the actual operating conditions of a power system.

Security monitoring is the on line identification of the actual operating conditions of a power system. It requires system wide instrumentation to gather the system data as well as a means for the on line determination of network topology involving an open or closed position of circuit breakers. A state estimation has been developed to get the best estimate of the status .the state estimation provides the database for security analysis shown in fig.5.6.

4.     To check analog measurements against limits.

2.     To transmit messages according to priority

1.     To determine status of each substation for proper connection.

1.     To check generator MW output on all units against unit limits

2.     To detect the presence of bad measures values.

3.     To identify the location of bad measurements

4.     To initialize the network model for other programs 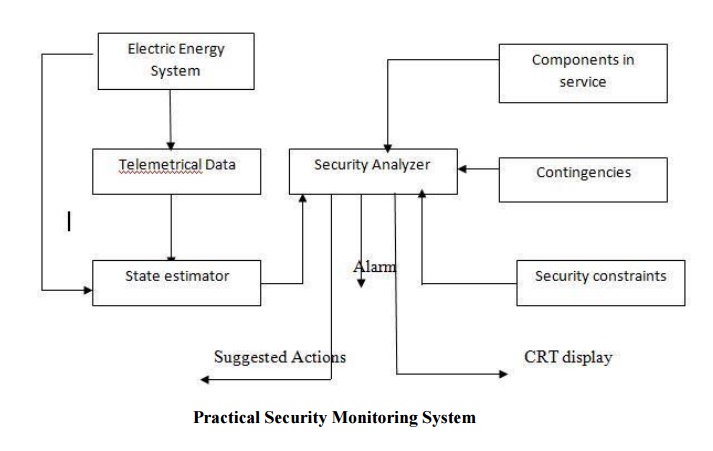 Ø   Network Topology processor-mode of the N/W

Ø   A contingency is the unexpected failure of a transmission line, transformer, or generator.

Ø   Usually, contingencies result from occurrence of a fault, or short-circuit, to one of these components.

Ø   When such a fault occurs, the protection systems sense the fault and remove the component, and therefore also the fault, from the system.

Ø   Of course, with one less component, the overall system is weaker, and undesirable effects may occur.

Ø   For example, some remaining circuit may overload, or some bus may experience an undervoltage condition. These are called static security problems.

Ø   Power systems are designed to survive all probable contingencies.

Ø   A contingency is defined as an event that causes one or more important components such as transmission lines, generators, and transformers to be unexpectedly removed from service.

Ø   Survival means the system stabilizes and continues to operate at acceptable voltage and frequency levels without loss of load.

Ø   Operations must deal with a vast number of possible conditions experienced by the system, many of which are not anticipated in planning.

Ø   Instead of dealing with the impossible task of analyzing all possible system states, security control starts with a specific state: the current state if executing the real-time network sequence; a postulated state if executing a study sequence.

1. Determine the state of the system based on either current or postulated conditions.

2.  Process a list of contingencies to determine the consequences of each contingency on the system in its specified state.

3.     Determine preventive or corrective action for those contingencies which represent unacceptable risk.

Ø   The required applications are grouped as a network subsystem that typically includes the following functions:

Uses real-time status and analog measurements to determine the „„best‟‟ estimate of the state of the power system. It uses a redundant set of measurements; calculates voltages, phase angles, and power flows for all components in the system; and reports overload conditions.

Determines the steady-state conditions of the power system network for a specified generation and load pattern. Calculates voltages, phase angles, and flows across the entire system.

Assesses the impact of a set of contingencies on the state of the power system and identifies potentially harmful contingencies that cause operating limit violations.

Recommends corrective control actions to be taken to alleviate an existing or potential overload in the system while ensuring minimal operational cost.

contingency occurs to preclude an overload situation if the contingency were to occur.

calculates the impact on losses if the output of a unit were to be increased by 1 MW. 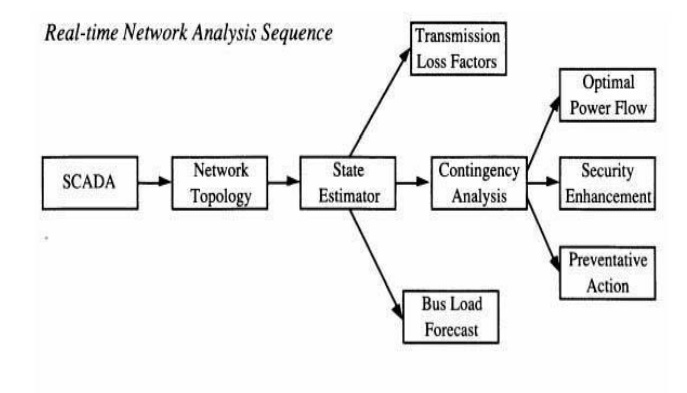