Ø   The EMS is a software system. Most utility companies purchase their EMS from one or more EMS vendors.

Ø   These EMS vendors are companies specializing in design, development, installation, and maintenance of EMS within ECCs.

Ø   There are a number of EMS vendors in the U.S., and they hire many power system engineers with good software development capabilities.

Ø   During the time period of the 1970s through about 2000, almost all EMS software applications were developed for installation on the control centers computers.

Ø    An attractive alternative today is, however, the application service provider, where the software  resides on the vendor‟s computer and control center personnel access it from the Internet.

Ø    Benefits from this arrangement include application flexibility and reliability in the software system and reduced installation cost.

Ø   One can observe from Figure. that the EMS consists of 4 major functions: network model building (including topology processing and state estimation), security assessment, automatic generation control, and dispatch.

Ø   These functions are described in more detail in the following subsections.

Ø   Energy management is the process of monitoring, coordinating, and controlling the generation, transmission and distribution of electrical energy.

Ø   Since transmission systems provide negligible energy storage, supply and demand must be balanced by either generation or load.

Ø   A SCADA system consists of a master station that communicates with remote terminal units (RTUs) for the purpose of allowing operators to observe and control physical plants.

RTUs transmit device status and measurements to, and receive control commands and set point data from, the master station.

Ø   Communication is generally via dedicated circuits operating in the range of 600 to 4800 bits/s with the RTU responding to periodic requests initiated from the master station (polling) every 2 to 10 s, depending on the criticality of the data.

Ø   The traditional functions of SCADA systems are summarized:

d)    Alarms: Inform operator of unplanned events and undesirable operating conditions. Alarms are sorted by criticality, area of responsibility, and chronology. Acknowledgment may be required

f)      Load shed: Provides both automatic and operator-initiated tripping of load in response to system emergencies. 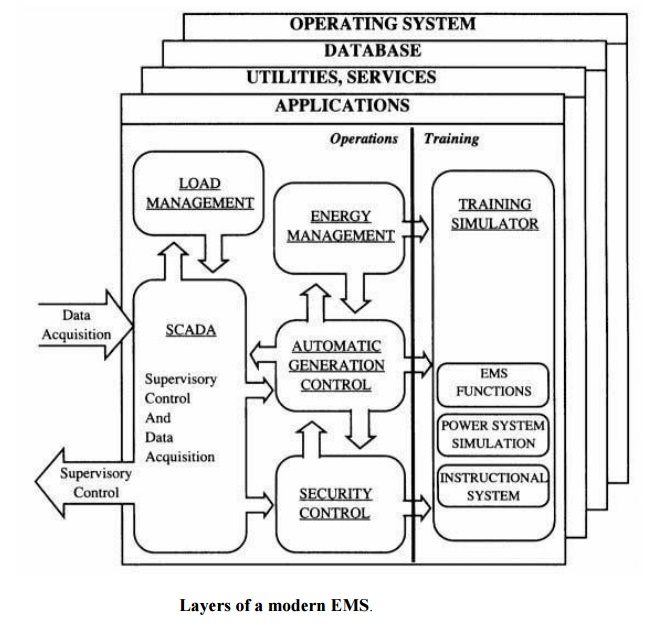 • Respond to operator requests to:

Ø   The major functions are load frequency control and economic dispatch, each of which is described below.

Ø   The minor functions are reserve monitoring, which assures enough reserve on the system; interchange scheduling, which initiates and completes scheduled interchanges; and other similar monitoring and recording functions.

Load frequency control (LFC) has to achieve three primary objectives, which are stated below in priority order:

1. To maintain frequency at the scheduled value

2.  To maintain net power interchanges with neighboring control areas at the scheduled values

3. To maintain power allocation among units at economically desired values.

Ø   The first and second objectives are met by monitoring an error signal, called area control error (ACE), which is a combination of net interchange error and frequency error and represents the power imbalance between generation and load at any instant.

Ø   This ACE must be filtered or smoothed such that excessive and random changes in ACE are not translated into control action.

Ø   Since these excessive changes are different for different systems, the filter parameters have to be tuned specifically for each control area.

Ø   This control signal is modified by limiters, dead bands, and gain constants that are tuned to the particular system.

Ø   This control signal is then divided among the generating units under control by using participation factors to obtain unit control errors (UCE).

Ø   These participation factors may be proportional to the inverse of the second derivative of the cost of unit generation so that the units would be loaded according to their costs, thus meeting the third objective.

Ø   However, cost may not be the only consideration because the different units may have different response rates and it may be necessary to move the faster generators more to obtain an acceptable response.

Ø   The UCEs are then sent to the various units under control and the generating units monitored to see that the corrections take place.

Ø   This control action is repeated every 2 to 6 s. In spite of the integral control, errors in frequency and net interchange do tend to accumulate over time.

Ø   These time errors and accumulated interchange errors have to be corrected by adjusting the controller settings according to procedures agreed upon by the whole interconnection.

Ø   These accumulated errors as well as ACE serve as performance measures for LFC.

Ø   The main philosophy in the design of LFC is that each system should follow its own load very closely during normal operation, while during emergencies; each system should contribute according to its relative size in the interconnection without regard to the locality of the emergency.

Ø   Thus, the most important factor in obtaining good control of a system is its inherent capability of following its own load.

Ø        This is guaranteed if the system has adequate regulation margin as well as adequate response capability.