Rules for Modern or Natural Classification in Animal Diversity

Kingdom, Phylum, Class, Order, Family, Genus and Species names are to be written one below the other in definite order.

RULES FOR MODERN OR NATURAL CLASSIFICATION

1.  Kingdom, Phylum, Class, Order, Family, Genus and Species names are to be written one below the other in definite order.

3.   When writing in hands, in both the cases of plants and animals, the generic and specific names must be underlined individually. For example, in case of Man when writing in hand, Genus: Homo, Species: Homo sapiens. This can also be written as H.sapiens:

4.  When printed Genus and species names are to be printed in italics. as: Genus: Homo and Species: Homo sapiens, H sapiens ..

5.        Excepting the generic and species names, no other taxon should not be underlined.

7.        In case of invertebrate animals, it is enough to write seven taxonomic categories in English, namely kingdom, Phylum, Class, Order, Family, Genus and Species. But in case of the vertebrate animals like Man, Frog, Snake Fish etc. you are to write the taxon subphylum, under ,the phylum chordata. For example the classification of Man and Toad are given below.

a. Classification of Man

N. B. In case ofveliebrate animals like Toad. Man etc, you are to write in totalof eight taxa including sub phylum vertebrata.

9. Scientific name is to be written in combination of two parts. Of these two parts, the first one is the genus part of the scientific name and the other is the species part, e. g. scientific ,name of Toad is Bufo melanostictus. Here Bufo is the genus part and melanosticutus is the species part. This system of naming the animals was approved by the ICZN (International commission on Zoological Nomenclature) in 1961.

So, the process of scientific naming of organisms (plants and animals) with the combination of two words using the genus name first and species name thereafter is called Binomial Nomenclature. 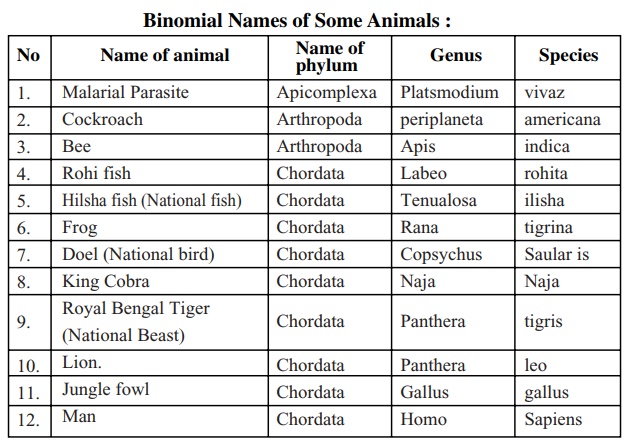 Like animals, unicellular organisms were placed into phylum protozoa. But now they are separated from the animal kingdom and placed in protista or protoctista of 5-kingdom classification. However, as phylum protozoa were a part of the animal kingdom, previously therefore they are still taught in zoology. In the last decade, about the 80's, the International Protozoologist Committee decided that the unicellular protozoans are of vast variety and that they should be included in a single phylum. Thus they have classified protozoans under 7 phyla. In this classification, protozoa is a subkingdom of protista or protoctista kingdom. Among them the amoeba is included in-the phylum Sarcomastigophorea and malarial parasite is in Apicomplexa. The names of nine major phyla of animal kingdom are mentioned below with their