Various transmissible infections may be acquired from others by direct contact, by aerosol transmission of infectious secretions, or indirectly through contaminated inanimate objects or materials.

Various transmissible infections may be acquired from others by direct contact, by aerosol transmission of infectious secretions, or indirectly through contaminated inanimate objects or materials. Some, such as malaria, involve an animate insect vector. These routes of spread are often referred to as horizontal transmission, in contrast to verticaltransmission from mother to fetus. The major horizontal routes of transmission of infec-tious diseases are summarized in Table 12 – 1 and discussed next. 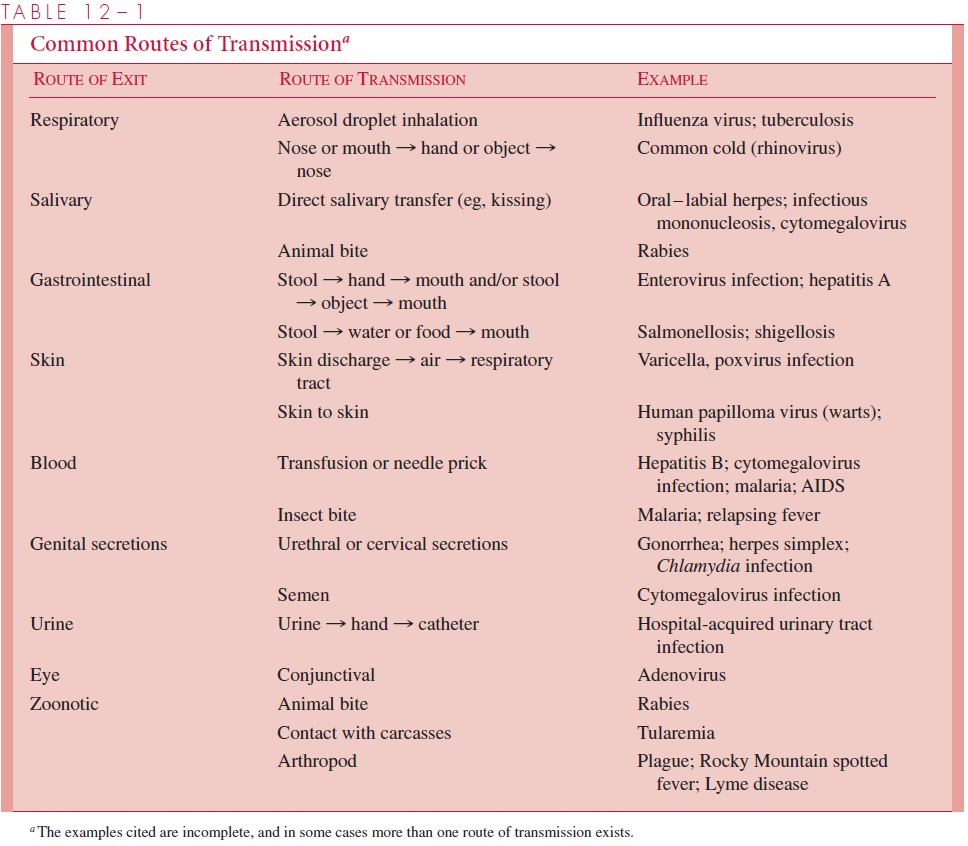 Many infections are transmitted by the respiratory route, often by aerosolization of respi-ratory secretions with subsequent inhalation by others. The efficiency of this process de-pends in part on the extent and method of propulsion of discharges from the mouth and nose, the size of the aerosol droplets, and the resistance of the infectious agent to desicca-tion and inactivation by ultraviolet light. In still air, a particle 100μm in diameter requires only seconds to fall the height of a room; a 10-μm particle remains airborne for about 20 minutes, smaller particles even longer. When inhaled, particles with a diameter of 6μm or greater are usually trapped by the mucosa of the nasal turbinates, whereas par-ticles of 0.6 to 5.0μm attach to mucous sites at various levels along the upper and lower respiratory tract and may initiate infection. These “droplet nuclei” are most important in transmitting many respiratory pathogens (eg, M. tuberculosis). Respiratory secretions are often transferred on hands or inanimate objects (fomites) and may reach the respiratory tract of others in this way. For example, spread of the common cold may involve transfer of infectious secretions from nose to hand by the infected individual, with transfer to others by hand-to-hand contact and then from hand to nose by the unsuspecting victim.

Some infections, such as herpes simplex and infectious mononucleosis, can be transferred directly by contact with infectious saliva through kissing. Transmission of infectious se-cretions by direct contact with the nasal mucosa or conjunctiva often accounts for the rapid dissemination of agents such as respiratory syncytial virus and adenovirus. The risk of spread in these instances can be reduced by simple hygienic measures, such as hand-washing.

Fecal – oral spread involves direct or finger-to-mouth spread, the use of human feces as a fertilizer, or fecal contamination of food or water. Food handlers who are infected with an organism transmissible by this route constitute a special hazard, especially when their personal hygienic practices are inadequate. Some viruses disseminated by the fecal – oral route infect and multiply in cells of the oropharynx and then disseminate to other body sites to cause infection. However, organisms that are spread in this way commonly multi-ply in the intestinal tract and may cause intestinal infections. They must therefore be able to resist the acid in the stomach, the bile, and the gastric and small-intestinal enzymes. Many bacteria and enveloped viruses are rapidly killed by these conditions, but members of the Enterobacteriaceae and unenveloped viral intestinal pathogens (eg, enteroviruses) are more likely to survive. Even with these organisms, the infecting dose in patients with reduced or absent gastric hydrochloric acid is often much smaller than in those with nor-mal stomach acidity.

Skin-to-skin transfer occurs with a variety of infections in which the skin is the portal of entry, such as the spirochete of syphilis (Treponema pallidum), strains of group A strepto-cocci that cause impetigo, and the dermatophyte fungi that cause ringworm and athlete’s foot. In most cases, an inapparent break in the epithelium is probably involved in infec-tion. Other diseases may be spread through fomites such as shared towels and inade-quately cleansed shower and bath floors. Skin-to-skin transfer usually occurs through abrasions of the epidermis, which may be unnoticed.

Bloodborne transmission through insect vectors requires a period of multiplication or al-teration within an insect vector before the organism can infect another human host. Such is the case with the mosquito and the malarial parasite. Direct transmission from human to human through blood has become increasingly important in modern medicine because of the use of blood transfusions and blood products and the increased self-administration of illicit drugs by intravenous or subcutaneous routes, using shared nonsterile equipment. Hepatitis B and C viruses as well as HIV were frequently transmitted in this way prior to the institution of blood screening tests.

Disease transmission through the genital tract has emerged as one of the most common infectious problems and reflects changing social and sexual mores. Spread can occur be- tween sexual partners or from the mother to the infant at birth. A major factor in these in-fections has been the persistence, high rates of asymptomatic carriage, and frequency of recurrence of organisms such as Chlamydia trachomatis, cytomegalovirus (CMV), herpes simplex virus, and Neisseria gonorrhoeae.

Infections of the conjunctiva may occur in epidemic or endemic form. Epidemics of ade-novirus and Haemophilus conjunctivitis may occur and are highly contagious. The major endemic disease is trachoma, caused by Chlamydia, which remains a frequent cause of blindness in developing countries. These diseases may be spread by direct contact via oph-thalmologic equipment or by secretions passed manually or through fomites such as towels.

Zoonotic infections are those spread from animals, where they have their natural reser-voir, to humans. Some zoonotic infections, such as rabies are directly contracted from the bite of the infected animal, while other are transmitted by vectors, especially arthropods (eg, ticks, mosquitoes). Many infections contracted by humans from animals are dead- ended in humans, while others may be transferred between humans once the disease is es-tablished in a population. Plague, for example, has a natural reservoir in rodents. Human infections contracted from the bites of rodent fleas may produce pneumonia, which may then spread to other humans by the respiratory droplet route.

Certain diseases can spread from the mother to the fetus through the placental barrier. This mode of transmission involves organisms such as rubella virus that can be present in the mother’s bloodstream and may occur at different stages of pregnancy with different organisms. Another form of transmission from mother to infant occurs by contact during birth with organisms such as group B streptococci, C. trachomatis, and N. gonorrhoeae, which colonize the vagina. Herpes simplex virus and CMV can spread by both vertical methods as it may be present in blood or may colonize the cervix. CMV may also be transmitted by breast milk, a third mechanism of vertical transmission.