This reaction releases energy in the form of heat, and by confining the gas within the combustion chamber we give it energy due to its pressure. We refer to the energy of this hot pressurised gas as its “enthalpy”. By releasing the gas through the throat the rocket motor turns the enthalpy of the gas into a flow of the gas with kinetic energy. It is this release of energy which powers the rocket. So the energy undergoes Two conversions:

Changing enthalpy to kinetic energy takes place in the throat and the nozzle. Our mass of hot gas flows into the throat, accelerating as the throat converges. If we reduce the chameter of the throat enough, the flow will accelerate to the speed of sound, at which pint something unexpected occurs. As the flow diverges into the nozzle it continues to accelerate beyond the speed of sound, the increase in velocity depending on the increase in area. This type of nozzle is called a De Laval nozzle. 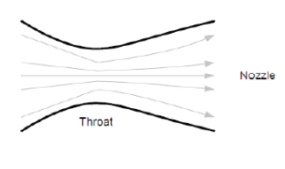 Kinetic energy of a body:

In model rockets the reaction is chemical generally short lived, a few seconds at most, sothe amount of heat transferred to the structural parts of the motor is limited. Also, the liner of the motor casing acts to insulate the casing from the rapid rise in temperature which would result from a reaction in direct contact with the metal casing. Model rocket motors also run at quite low pressure, well below the limits if the motor casing, further protecting the casing. It can be seen that the enthalpy of a model rocket motor is thus quite low. In large launch vehicles such as Ariane, the pressure and temperature are high, the burn may last several minutes, and the mass budget for the designer is very tight. Designing motors for these purposes is highly complex.