The spread of the Bhakti movement in Maharashtra helped the Maratha people develop consciousness of their identity and oneness. It promoted a feeling of unity, especially in terms of social equality, among the Marathas.

Factors Responsible for the Rise of Marathas

The physical features of the Maratha country developed certain peculiar qualities among the Marathas, which distinguished them from the rest of the people of India. During the sixteenth century, the sultans of Bijapur and Ahmednagar had recruited them to serve in cavalry. Their presence was helpful to the sultans in balancing the political ambitions of the Muslim soldiers in their service. The rocky and mountainous terrain gave protection to the Marathas from invaders. It proved to be advantageous in guerrilla warfare for Marathas.

Bhakti Movement and the Marathas

The spread of the Bhakti movement in Maharashtra helped the Maratha people develop consciousness of their identity and oneness. It promoted a feeling of unity, especially in terms of social equality, among the Marathas. In the Maratha region, the religious leaders were drawn from different social groups. Eknath, Tukaram and Ramdas were the noted Bhakti saints. Tukaram and Ramdas had considerable influence on the life of Shivaji. 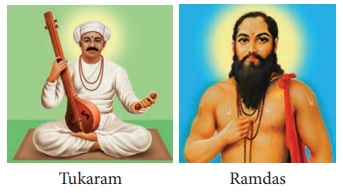 Literature and Language of the Marathas

Marathi language and literature also served to develop unity among the people. Hymns composed in the Marathi language by Bhakti saints were sung by people of all castes and classes.

Shivaji, born in 1627, grew up under the care of his mother, Jijabai, who influenced him with stories from the Hindu epics, Ramayana and the Mahabharatha. 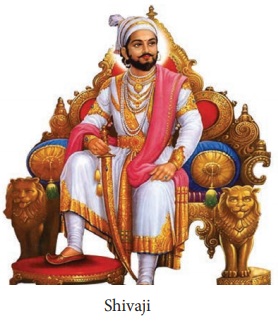 Shivaji’s teacher and guardian, Dadaji Kondadev, trained him in the art of horse riding, warfare and state administration. At the age of eighteen in 1645, when he had just entered the military career, he successfully captured Kondana, a fort near Poona. The following year, he took the fort of Torna. Then he succeeded in conquering Raigarh, which was rebuilt by him. 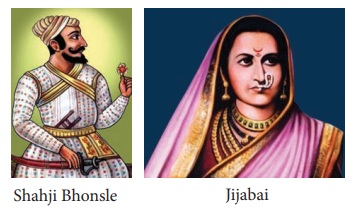 Shivaji’s Confrontation with Sultan of Bijapur

Shivaji became totally independent after the death of his guardian Kondadev (1649). He also got his father’s jagir transferred to him, which was earlier looked after by Kondadev. The strength of his army was Mavali foot soldiers. With their help, Shivaji conquered many of the hill forts near Poona. He captured Puranthar from the Mughals. Shivaji’s military raids angered the Sultan of Bijapur. He held Shivaji’s father captive and released him only after Shivaji promised to suspend his military raids. Shivaji kept his word and remained at peace with Bijapur from then on till his father Shahji’s death. During this period he toned up his administration. 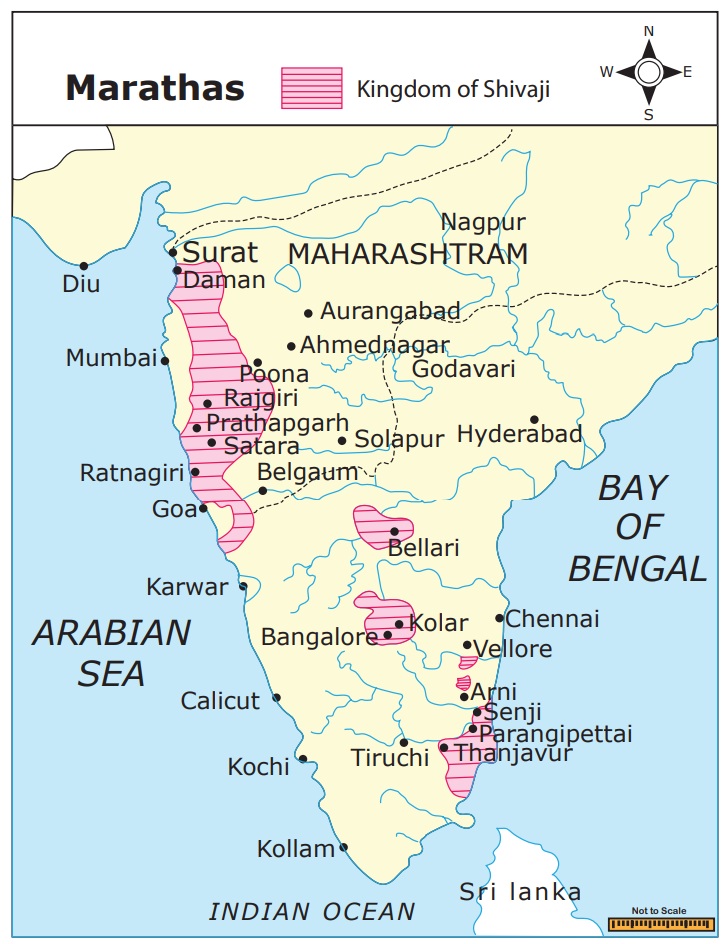 Shivaji resumed his raids after his father’s death and conquered Javali (1656) from the Maratha chief Chandrarao More. He also reduced all the lesser Maratha chiefs around Pune to subordination. The soldiers of Bijapur from the hill fortresses acquired by Sultan of Bijapur were driven out and replaced with his own commanders. These moves and the defeat of Bijapur army sent to punish Shivaji alarmed the Mughal officials. When the Mughals made a punitive expedition, Shivaji boldly confronted them. In 1659 he killed Afzal Khan, a notable general of Bijapur. In 1663 he wounded and chased away the Mughal general and Aurangzeb’s uncle Shaista Khan. To cap these bold acts, he audaciously directed his soldiers to plunder Surat (1664), the major Mughal port on the Arabian Sea.

After Shivaji plundered Surat, Aurangzeb swung into action. An army under the command of a Rajput general, Raja Jai Singh, was ordered to destroy Shivaji and annex Bijapur. Shivaji finally sought peace, yielded the fortresses he had seized and accepted service as a mansabhdar in the Mughal service for the conquest of Bijapur. He also agreed to visit the imperial court at Agra, on the advice of Jai Singh only to suffer humiliation, which led him to escape, by hiding in a basket.Aurangzeb was determined to stop the Maratha interference in his expeditions against the Deccan kingdoms. He attempted to patch up with Shivaji, but those efforts failed. In 1670, the Mughal army was helpless when Shivaji again plundered Surat. In 1674, Shivaji crowned himself by assuming the title of Chhtrapati and the coronation of Shivaji was celebrated with great splendour at Raigarh, as the occasion was the founding of a new kingdom and a new dynasty. Shivaji’s aged mother Jijabai, who had lived to see her son crowned the king, passed away a few days after the coronation, with her life wish fulfilled. Shivaji spent his last years trying to bring his son Shambhuji into his ways as he had defected to the Mughals. He fell ill with fever and dysentery and died in 1680.

Chhatra (parasol) pati (master or lord),is the Sanskrit equivalent oking or emperor, and was used by the Marathas, especially Shivaji.

Shivaji’s political system consisted of three circles. At the centre was the swaraj. Shivaji was caring and would not allow the people to be harassed in any way. In thesecond circle, Shivaji claimed suzerainty, but he did not administer them himself. He protected the people from loot and plunder for which they were required to pay Chauth (one-fourth of the revenue as protection money) and Sardeshmukhi (an extra one-tenth, as the chieftain’s due). In the third circle, Shivaji’s only objective was plunder.

Deshmukhs held sway over rural regions and their control was over between twenty and hundred villages. Each village had a powerful headman (Patil), who was assisted by a village accountant of a keeper of records (Kulkarni). In the absence of a strong central government, these local community level officials functioned as the true government.

Shivaji gave utmost attention to his army and training of its personnel. In the beginning, the backbone of his army was the infantry. But as his campaigns extended into the plains, his cavalry grew in size and importance. Every soldier was selected personally by Shivaji and was taken into service on the assurance of a soldier already in service. Shivaji took great care in the maintenance and security of his forts. Retired captains holding a high reputation were put in charge of guarding the forts.

Shivaji designated eight ministers as the Ashtapradhan, each holding an important portfolio. Peshwa was the equivalent of a modern prime minister in the Maratha Empire. Originally, they were subordinates to the Chhatrapati. But, in course of time, especially from the time of Sahu Maharaja, Peshwa became the de facto Maratha ruler while the Chhatrapati was reduced to the position of a nominal ruler.

Shivaji was influenced by the Mughal revenue system. The assessments were made on the actual yield, with three-fifths left to the cultivator and two-fifths taken by the government. In judicial administration, civil cases continued to be decided by the panchayat, the village council, while criminal law was based on the shastras, the Hindu law books. 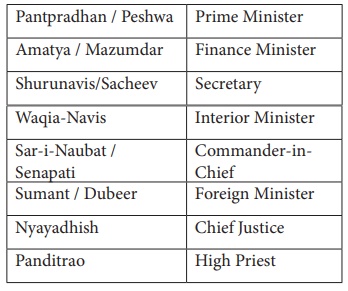 Shambhuji succeeded Shivaji after a succession tussle with Anaji Datto. There were family feuds splintering the Maratha kingdom. Durgadas of Rathore Marwar and Aurangzeb’s rebel son Akbar arrived in Maharashtra and took shelter in Shambhuji’s court. Aurangzeb viewed these developments very seriously and took all out efforts to finish off Shambhuji. Marathas under Shambhuji were in no position to resist the Mughals. Aurangzeb himself arrived in the Deccan in 1681. Aurangzeb’s main goal was the annexation of Bijapur and Golconda. These two sultanates fell to Aurangzeb by 1687. In little over a year, Shambhuji was captured by the Mughals and, after torture, put to death. 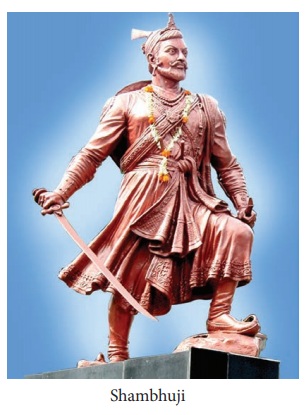 Shambhuji was under the wicked influence of his family priest Kavi Kalash. Kavi Kalash was the caretaker of Shambhuji in Varanasi during Shivaji’s flight from Agra. He later brought Shambhuji safely to Raigarh. His dominance in the Court became absolute in course of time, as Shambhuji looked to his advice for everything. Kavi Kalash was a distinguished scholar and poet. But he was a practitioner of witchcraft. So the orthodox Hindus in the court had developed a deep hatred for him. When Shambhuji was captured by the Mughal army, he was found to be in the company of Kavi Kalash. So both of them were subjected to all forms of torture and then executed by the orders of Aurangzeb.

Shivaji's grandson Shahu means honest, originally a name given by Aurangzeb to contrast his character with that of Shivaji) ruled from 1708 to 1749. During the first half of the eighteenth century, consolidation of royal power was achieved through conferment of royal entitlements upon those who served Shahu. 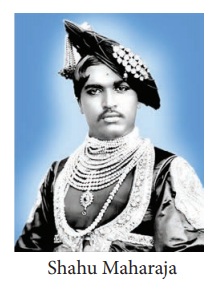 During Shahu’s 40-year reign there was increase in the territory under the Maratha control, from which tribute was regularly extracted. More centralised and strong state structure also began to take shape. Every household, including that of landed household, profited from state employment.