• To know the importance of resources

• To describe the renewable resources

• To understand the non-renewable resources

• To identify the fossil fuel resources

A country’s social, economic and political strength lies in the distribution, utilization and conservation of its resources. Anything which can be used for satisfying the human needs I called resource. Natural resources are resources that exist without action of humankind. Natural resources are obtained from environment. Many natural resources are essential for human survival. Resources always cannot be consumed in their original form, but they must be processed into usable commodities and usable things.

• Natural resources satisfy daily needs of man such as food, clothing and shelter.

On the basis of origin, resources may be divided into two types. They are:

Biotic resources are found in the biosphere which are obtained from living and organic materials. It includes forests, crops, birds, animals, fishes, man and materials that can be obtained from them. Fossil fuels such as coal and petroleum are also included in this category because they are formed from decayed organic matter.

Abiotic resources are the non-living parts of an environment. Examples of abiotic resources include land, water, air, sunlight and heavy metals including ores such as gold, iron, copper, silver etc.

On the basis of renewability, resources can be divided into two types. They are:

The sun produces energy in the form of heat and light. Solar energy is not harmful to the environment. Photovoltaic devices or solar cells, directly convert solar energy into electricity. Individual solar cell in group panel can perform small applications from charging calculator, watch batteries, to large such as to power residential dwellings. Photovoltaic power plants and concentrating solar power plants are the largest solar applications covering acres. India, China, Japan, Italy and States of America are major utilizers of solar energy in the world. 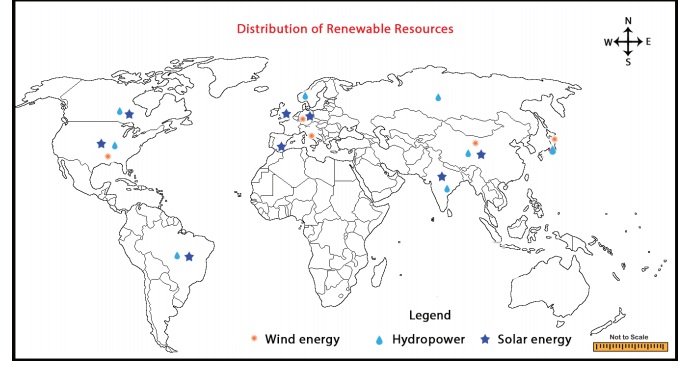 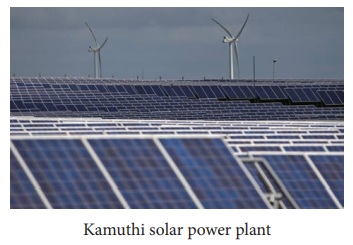 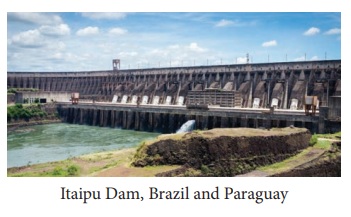 Three Gorges Dam in China is the largest hydroelectricity project in the world. It’s construction started in 1994 and ended in 2012. The installed capacity ofthe dam is 22,000MW. 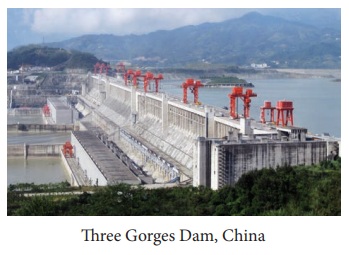 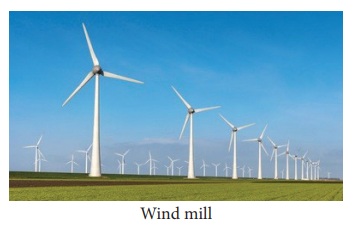 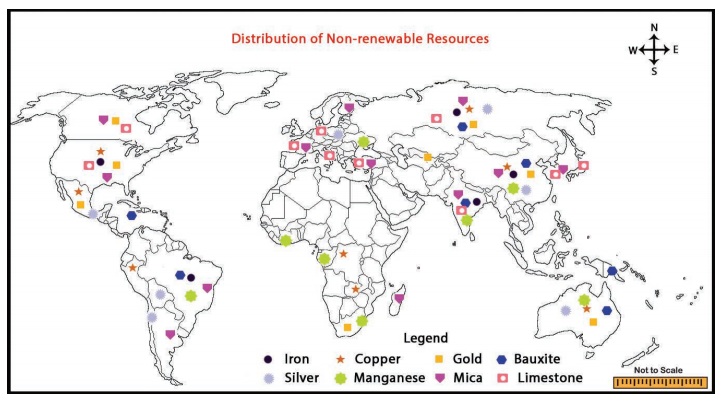 Iron is the fourth most common element in the Earth’s crust and the most widely available metal. Magnetite and hematite are the common ore for iron, which occurs normally in the rocks of the crust. Iron ore is the key raw material in making steel and 98% of the iron ore extracted is used to make Steel. Pure iron ore is very soft, but its strength is increased many folds by adding small amount of carbon and manganese. It’s low cost and high earth strength makes it usable in engineering applications, such as the construction of machinery and machine tools, automobiles, construction of large ships, structural components of building, bridges etc.

Iron ore is mined in about 50 countries. Among the iron ore producing countries China, Australia, Brazil, India and Russia are the principal producers accounting for 85% of the world’s total output of iron ore. These countries have 70% of the total reserves of the world. Jharkhand, Odisha, Madhya Pradesh, Chhattisgarh, Karnataka and Goa account for over 95 per cent of the total reserves of India. Iron ores found at Kanjamalai in Tamil Nadu.

Copper is one of the first metals known and used by man. Copper ranks as the third most consumed industrial metal in the world after Iron and Aluminium. Copper is good conductor of heat and electricity. About three quarters of copper is used to make electrical wires, telecommunication cables and electronics.

Chile is the world’s number one country in the production of copper. Other copper producing countries are Peru, China, United States, Congo and Australia.

It is a rare and precious metal. Hence, it has high demand in world markets. Formerly, it was used for minting coins, but now it is used for making ornaments and in dentistry. It is regarded as a symbol of prosperity and a form of wealth.

China is the world’s largest producer of gold. Also, Australia, Russia, United States, South Africa and Canada are the major producers of gold. Among these countries, Australia has 9500 tons reserves of gold ore and it is world’s leading country in gold ore reserves. Karnataka is the largest producer of gold in India. Kolar Gold Field is one of the deepest mines of the world. 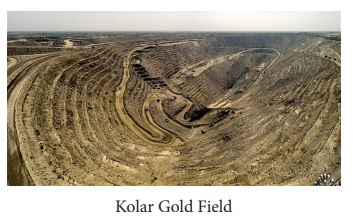 Aluminium is produced from bauxite ore. There are several ores that contain aluminium but bauxite contains more aluminium. Aluminium has wide range of uses compared to other metals. Aluminium is light in weight, tough and cheaper, which makes it popular metal for constructional purpose. It is mainly used in the construction of aircrafts, ship, automobiles, railway coaches and etc. Aluminium is a good conductor of electricity and heat, hence, it is used for making electrical cables. It is highly resistant to corrosion. By the addition of small quantities of other metals to aluminium, it creates superior alloy than pure aluminium.E.g: Duralumin.

Silver is also a precious metal like gold. It has a wider variety of uses than gold. It is used in making jewellery, dentistry, photographic goods, electroplating industry and in the manufacture of luxury goods. About two-third of silver is used for monetary purposes. Like gold, silver also resists corrosion.

Manganese is a steel-greyed, hard, shiny and brittle metal. The common ores of manganese are Pyrolusite Manganese, Psilomelane and Rhodochrosite. Manganese is essential for the production of good quality Steel. Manganese is used in making electrical batteries. It is also used as colouring material in bricks, pottery, floor tiles. Manganese compounds are used in making disinfecting liquids, bleaching powder, fertilizers etc.

Muscovite and Biotite are the common ores of Mica. It is one of the indispensable minerals used in electrical and electronics industry. It is used as an insulating material in electrical industry. In powder form, it is used for making lubricating oils and decorative wallpapers.

China is the world’s top producer of mica. Russia, Finland, United States, Turkey and Republic of Korea also play a major role in the production of mica. About 95 per cent of India’s mica is found in just three states of Andhra Pradesh, Rajasthan and Jharkhand.

Limestone is a sedimentary rock, composed mainly by skeletal fragments of marine organisms such as coral, foraminifera and molluscs. About 10% of sedimentary rocks are limestones. Mostly limestone is made into crushed stone and used as a construction material. It is used for facing stone, floor tiles, stair treads, windows sills and many other purposes. Crushed limestone is used in smelting and other metal refining process. Portland cement is made from limestone.

This is the most abundantly found fossil fuel the then dead plant matter is converted into peat. It is used as a domestic fuel, in industries such as iron and steel, steam engines to generate electricity. Electricity produced from coal is called Thermal Power. Coal is classified into four types based on carbon content. They are:

The leading coal producers of the world is China. Beside this, India, USA, Australia, Indonesia and Russia also produce more coal. The coal producing areas of India are Raniganj in West Bengal, Neyveli in Tamil Nadu, Jharia, Dhanbad, and Bokaro in Jharkhand. 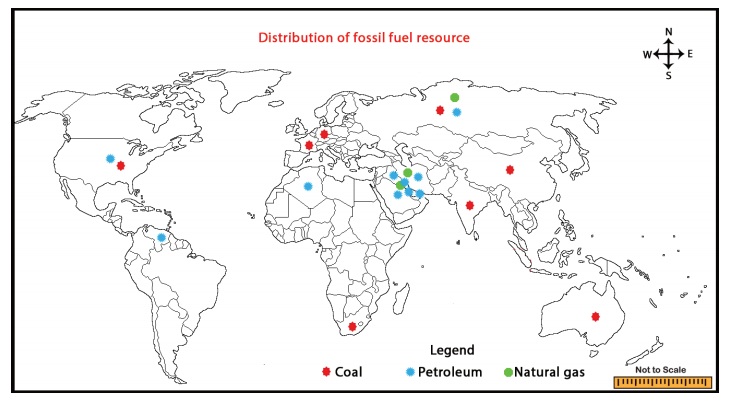 Most of the coal deposite that we use now, where formed about 300 million years ago. Much of the earth was covered with steamy swamps. As the plants and trees are dead, their remains were buried underneath the swamps. Eventually, they were transformed into coal beneath the ground due to excessive heat and pressure. 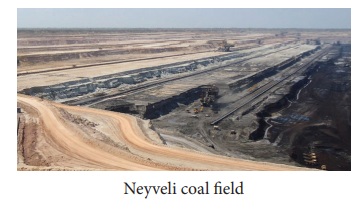 Petroleum is found between the layers of rocks and is drilled from oil fields located in Offshore and coastal areas. This is sent to refineries which process crude oil and produce variety of products like diesel, petrol, kerosene, wax, plastics and lubricants. Petroleum and its derivatives are called Black Gold as they are very valuable.

The chief petroleum producing countries are Saudi Arabia, Iran, Iraq and Qatar. The other major producers are USA, Russia, Venezuela, Kuwait, UAE and Algeria. The leading producers in India are Digboi in Assam, Bombay High in Mumbai and the deltas of Krishna and Godavari rivers. 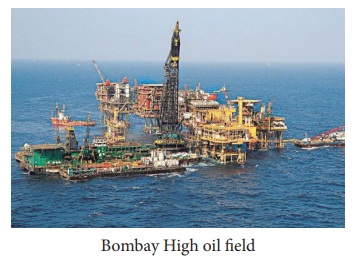 Natural gas is found with petroleum deposits and is released when crude oil is brought to the surface. It can be used as a domestic and industrial fuel.

More than 50% of the global natural gas reserves are found in United States of America, Russia, Iran and Qatar.

In India, Krishna and Godavari Delta, Assam, Gujarat and some areas of offshore in Mumbai have natural gas resources.

1. Natural resources are obtained from environment.

2 .Renewable resources can be used repeatedly and replaced naturally.

4. Solar energy is not harmful to the environment.

5. Hydroelectricity is generated from moving water with high velocity and  great falls with the help of a turbines and dynamos.

8. Fossil fuels resources are normally formed from the remains of dead plants and animals.

3. Hydroelectricity: generated from moving water with high velocitand great falls with the help of turbines and dynamos நீர் மின் சக்தி

4. Metallic resources: resources that are composed of metals உலோகக வளங்கள்

6. Duralumin: a hard, light alloy of aluminium with copper and otherelements துராலுமின்

7. Fossil fuel: formed from the remains of dead plants and animals படிம எரிபபோருள்