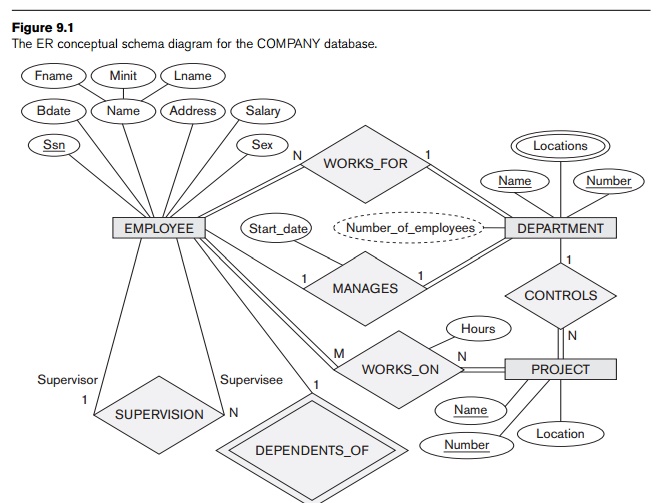 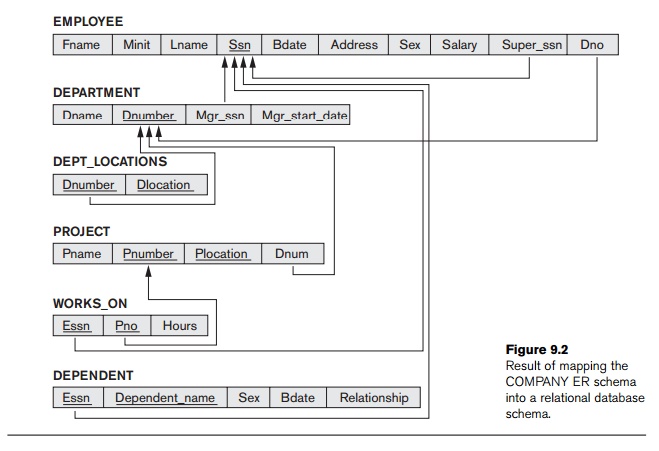 mapping steps. We assume that the mapping will create tables with simple single-valued attributes. The relational model constraints defined in Chapter 3, which include primary keys, unique keys (if any), and referential integrity constraints on the rela-tions, will also be specified in the mapping results.

If multiple keys were identified for E during the conceptual design, the information describing the attributes that form each additional key is kept in order to specify secondary (unique) keys of relation R. Knowledge about keys is also kept for index-ing purposes and other types of analyses.

The relations that are created from the mapping of entity types are sometimes called entity relations because each tuple represents an entity instance. The result after this mapping step is shown in Figure 9.3(a).

In our example, we create the relation DEPENDENT in this step to correspond to the weak entity type DEPENDENT (see Figure 9.3(b)). We include the primary key Ssn of the EMPLOYEE relation—which corresponds to the owner entity type—as a for-eign key attribute of DEPENDENT; we rename it Essn, although this is not necessary. 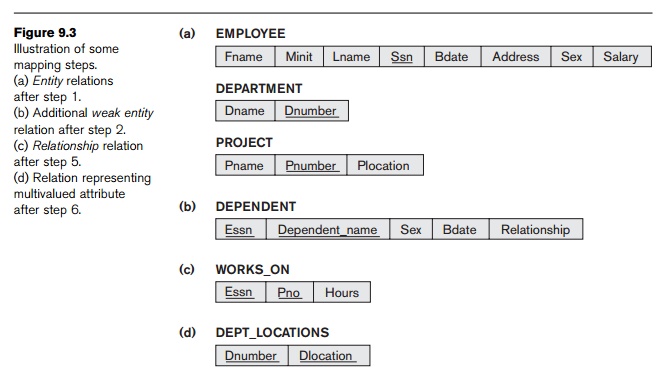 The primary key of the DEPENDENT relation is the combination {Essn, Dependent_name}, because Dependent_name (also renamed from Name in Figure 9.1) is the partial key of DEPENDENT.

It is common to choose the propagate (CASCADE) option for the referential triggered action (see Section 4.2) on the foreign key in the relation corresponding to the weak entity type, since a weak entity has an existence dependency on its owner entity. This can be used for both ON UPDATE and ON DELETE.

Step 3: Mapping of Binary 1:1 Relationship Types. For each binary 1:1 relationship type R in the ER schema, identify the relations S and T that correspond to the entity types participating in R. There are three possible approaches: (1) the foreign key approach, (2) the merged relationship approach, and (3) the cross-reference or relationship relation approach. The first approach is the most useful and should be followed unless special conditions exist, as we discuss below.

Foreign key approach: Choose one of the relations—S, say—and include as a foreign key in S the primary key of T. It is better to choose an entity type with total participation in R in the role of S. Include all the simple attributes (or simple components of composite attributes) of the 1:1 relationship type R as attributes of S.

Note that it is possible to include the primary key of S as a foreign key in T instead. In our example, this amounts to having a foreign key attribute, say Department_managed in the EMPLOYEE relation, but it will have a NULL value for employee tuples who do not manage a department. If only 2 percent of employees manage a department, then 98 percent of the foreign keys would be NULL in this case. Another possibility is to have foreign keys in both relations S and T redundantly, but this creates redundancy and incurs a penalty for consistency maintenance.

Merged relation approach: An alternative mapping of a 1:1 relationship type is to merge the two entity types and the relationship into a single rela-tion. This is possible when both participations are total, as this would indicate that the two tables will have the exact same number of tuples at all times.

Cross-reference or relationship relation approach: The third option is to set up a third relation R for the purpose of cross-referencing the primary keys of the two relations S and T representing the entity types. As we will see, this approach is required for binary M:N relationships. The relation R is called a relationship relation (or sometimes a lookup table), because each tuple in R represents a relationship instance that relates one tuple from S with one tuple from T. The relation R will include the primary key attributes of S and T as foreign keys to S and T. The primary key of R will be one of the two foreign keys, and the other foreign key will be a unique key of R. The drawback is having an extra relation, and requiring an extra join operation when combining related tuples from the tables.

The propagate (CASCADE) option for the referential triggered action (see Section 4.2) should be specified on the foreign keys in the relation corresponding to the relationship R, since each relationship instance has an existence dependency on each of the entities it relates. This can be used for both ON UPDATE and ON DELETE.

Figure 9.2 shows the COMPANY relational database schema obtained with steps 1 through 6, and Figure 3.6 shows a sample database state. Notice that we did not yet discuss the mapping of n-ary relationship types (n > 2) because none exist in Figure 9.1; these are mapped in a similar way to M:N relationship types by including the following additional step in the mapping algorithm.

For example, consider the relationship type SUPPLY in Figure 7.17. This can be mapped to the relation SUPPLY shown in Figure 9.4, whose primary key is the com-bination of the three foreign keys {Sname, Part_no, Proj_name}.

2. Discussion and Summary of Mapping for ER Model Constructs

Table 9.1 summarizes the correspondences between ER and relational model con-structs and constraints.

One of the main points to note in a relational schema, in contrast to an ER schema, is that relationship types are not represented explicitly; instead, they are represented by having two attributes A and B, one a primary key and the other a foreign key (over the same domain) included in two relations S and T. Two tuples in S and T are related when they have the same value for A and B. By using the EQUIJOIN operation (or NATURAL JOIN if the two join attributes have the same name) over S.A and T.B, we can combine all pairs of related tuples from S and T and materialize the relationship. When a binary 1:1 or 1:N relationship type is involved, a single join operation is usually needed. For a binary M:N relationship type, two join operations are needed, whereas for n-ary relationship types, n joins are needed to fully materialize the relationship instances. 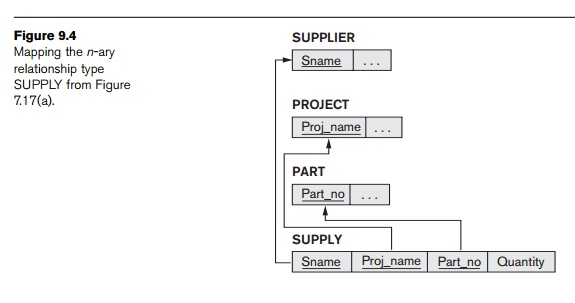 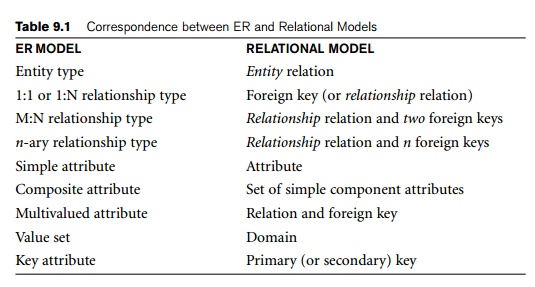 For example, to form a relation that includes the employee name, project name, and hours that the employee works on each project, we need to connect each EMPLOYEE tuple to the related PROJECT tuples via the WORKS_ON relation in Figure 9.2. Hence, we must apply the EQUIJOIN operation to the EMPLOYEE and WORKS_ON relations with the join condition Ssn = Essn, and then apply another EQUIJOIN operation to the resulting relation and the PROJECT relation with join condition Pno = Pnumber. In general, when multiple relationships need to be traversed, numerous join operations must be specified. A relational database user must always be aware of the foreign key attributes in order to use them correctly in combining related tuples from two or more relations. This is sometimes considered to be a drawback of the relational data model, because the foreign key/primary key correspondences are not always obvious upon inspection of relational schemas. If an EQUIJOIN is performed among attributes of two relations that do not represent a foreign key/primary key relationship, the result can often be meaningless and may lead to spurious data. For example, the reader can try joining the PROJECT and DEPT_LOCATIONS relations on the condition Dlocation = Plocation and examine the result (see the discussion of spurious tuples in Section 15.1.4).

In the relational schema we create a separate relation for each multivalued attribute. For a particular entity with a set of values for the multivalued attribute, the key attribute value of the entity is repeated once for each value of the multivalued attribute in a separate tuple because the basic relational model does not allow multiple values (a list, or a set of values) for an attribute in a single tuple. For example, because department 5 has three locations, three tuples exist in the DEPT_LOCATIONS relation in Figure 3.6; each tuple specifies one of the locations. In our example, we apply EQUIJOIN to DEPT_LOCATIONS and DEPARTMENT on the Dnumber attribute to get the values of all locations along with other DEPARTMENT attributes. In the resulting relation, the values of the other DEPARTMENT attributes are repeated in separate tuples for every location that a department has.

The basic relational algebra does not have a NEST or COMPRESS operation that would produce a set of tuples of the form {<‘1’, ‘Houston’>, <‘4’, ‘Stafford’>, <‘5’, {‘Bellaire’, ‘Sugarland’, ‘Houston’}>} from the DEPT_LOCATIONS relation in Figure 3.6. This is a serious drawback of the basic normalized or flat version of the relational model. The object data model and object-relational systems (see Chapter 11) do allow multivalued attributes.