Open System Interconnection (OSI) model was found in the year 1934, general framework that enables network protocols ong with software and systems to be developed based on general set of guidelines. It describes the standards for the inter-computer communication. See Figure 11.9 There are many prompts used to remember the OSI layer order:

● Everyone Should Try New Diet Pepsi.

1. Physical Layer: This is the 1st layer, it defines the electrical and physical specifications for devices.

2. Data Link Layer: It is the 2nd layer and it guarantees that the data transmitted are free of errors. This layer has simple protocols like “802.3 for Ethernet” and “802.11 for Wi-Fi”. 3. Network Layer: It is the 3rd layer determining the path of the data packets. This layer is responsible for routing of data packets using IP Addressing.

4. Transport Layer: It is the 4th layer that guarantees the transportation/sending of data successfully. It includes the error checking operation.

5. Session Layer: It is the 5th layer, identifies the established system session between different network entities. It controls dialogues between computers .For instance, while accessing a system remotely, session is created between your computer and the remote system.

6. Presentation Layer: It is the 6th layer that does the translation of data to the next layer (Prepare the data to the Application Layer). Encryption and decryption protocols occur in this layer such as, Secure Socket Layer (SSL).

7. Application Layer: It is the 7th layer, which acts as the user interface platform comprising of software within the system.

Transmission Control Protocol/Internet Protocol, TCP/IP is a set of protocols which governs communications among all computers on the Internet. TCP/IP protocol tells how information should be packaged, sent, and received, as well as how to get to its destination. See Figure 11.10

TCP WORKING: TCP/IP is a combination of two protocols: Transmission Control Protocol (TCP) and Internet Protocol (IP). The Internet Protocol typically specifies the logistics of the packets that are sent out over networks; it specifies the packets which have to go, where to go and how to get there. The Transmission Control Protocol is accountable for guaranteeing the trustworthy transmission of data. It checks if any packet is not transmitted and submits it again.

● HTTP – It is used between a web client and a web server and it guarantees non-secure data transmissions. ● HTTPS – It is used between a web client and a web server ensures secure data transmissions.

● FTP – It is used between computers for sending and receiving file.

The address for any website is not as easy as to remember, domain name are used instead. For example, 216.58.216.164 is one of the IP address for Google and google.com is the domain name.

The Different Layers of TCP/IP

There are four total layers of TCP/IP protocol, each of which is listed below with a brief description.

● Internet Layer - describes how packets are to be delivered.

Network protocol sotherthan OSI and TCP/ IP were simply known as other network protocols which implements security over the network communication that include HTTPs, SSL, and SFTP. Other networks similarly classified in network layer are IP, ARP, ICMP,IGMP, at transport layer are TCP,UDP at Application Layer are HTTP, FTP, Telenet, SMTP, and DNS.

For example, let us take a bank website, when we go to login page, we may watch an HTTPS in address bar with some specific design. HTTPS mainly deals with financial transactions or transfer users personal data highly sensitivily. Banking websites are common examples for HTTPS. Data exchanged between the user and the website is not stolen, read or altered by a third party.

In layman’s terms, HTTPS gurantees that users watch websites that they want to watch. Data exchanged between the user and the website is not read, stolen or tampered by a third party. But it can’t encrypt everything - it has some limitations too. For example, HTTPS can’t encrypt host addresses and port numbers. 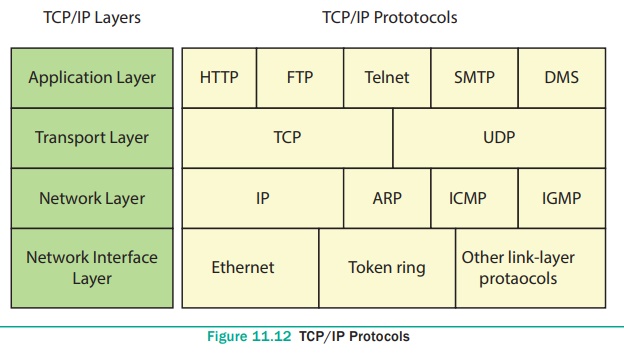 TCP/IP procedures are based on a layered framework. TCP/IP has four layers. See Figure 11.12

It is the bottommost level layer. It is comparable to that of the Open System Interconnection Physical and Data Link layers. Different TCP/IP protocols are being used at this layer, Ethernet and Token Ring for local area networks and protocols such as X.25, Frame Relay, and ATM for wide area networks. It is assumed to be an unreliable layer.

It is the layer where data is addressed, packaged, and routed among networks. The important Internet protocols that operate at the Network layer are:

● Internet Protocol (IP): Routable protocol which uses IP addresses to deliver packets. It is an unreliable protocol, does not guarantee delivery of information.

Internet Control Message Protocol (ICMP): Used by network devices to send error messages and operational information. Example: A host or router might not be reached or a request service is not presented.

● Internet Group Management Protocol (IGMP): It is a communication protocol used by hosts and routers to send Multicast (group Communication) messages to multiple IP addresses at once.

The sessions are recognized and data packets are swapped between hosts in this layer. Two main protocols established at this layer are: