Internet Protocol (IP) is the principle of communication protocol amoung the Internet protocols for layering on datagram across boundaries of other networks.

Internet Protocol (IP) is the principle of communication protocol amoung the Internet protocols for layering on datagram across boundaries of other networks. Its main function is to allow Internet working and boost up the Internet.

Internet protocol (IP) will discharge packets from the source host and it will deliver to the destination host via IP address in the packet header.

Network protocols is the usual procedures, rules, formal standards and policies comprised of formats which allows communication between more than one device which is connected to the network. Network protocols have to do end-to-end process of secure on time and manage data or network communication.

The broad types of networking protocols, including:

● Network security protocol is which implement security over network communication and include HTTP, SFTP and SSL.

● Network management protocol will Provide network governance and maintenance and include ICMP and SNMP.

INTERNET: The Internet, “the Net,” is a worldwide system of computer networks-A network of networks where the users at any one computer can, if they have permission, get information from any other computer. The Internet is a network of global connections – comprising private, public, business, academic and government networks – linked by guided, wireless and fiber-optic technologies. It was perceived by the Advanced Research Projects Agency (ARPA) of the U.S. government in 1969 and was first recognized as the ARPANet. The unique aim was to generate a network that would permit users of a research computer from one university to “talk to” research computers on other universities. The jargons Internet and World Wide Web are frequently used interchangeably, but they are not precisely the same. The Internet denotes to the global communication system, including infrastructure and hardware, whereas the web is one of the services interconnected over the Internet. See Figure 11.1

INTRANET: It is a private network within an enterprise to share company data and computing resources between the employees. It may consist of many interlinked local area networks. It includes connections through one or more gateway (connects two networks using different protocols together known as protocol convertor) computers to outside Internet. See Figure 11.2 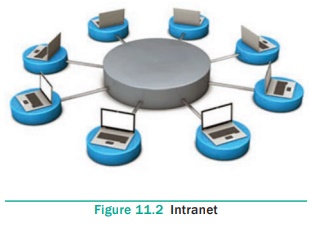 EXTRANET: It is a private network that uses Internet technology and the public telecommunication system to securely share business’s information with suppliers, vendors, partners, customers, or other businesses. See Figure 11.3 and 11.4 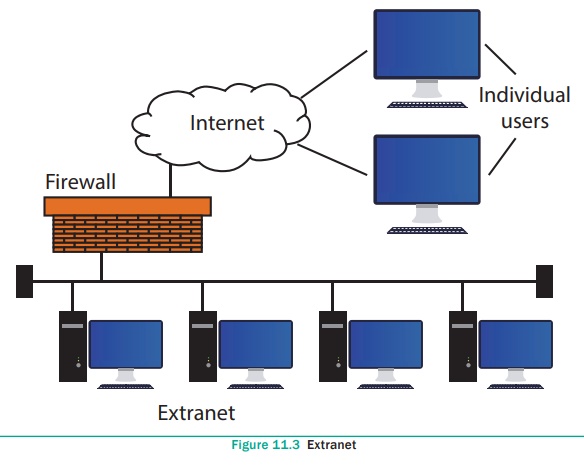 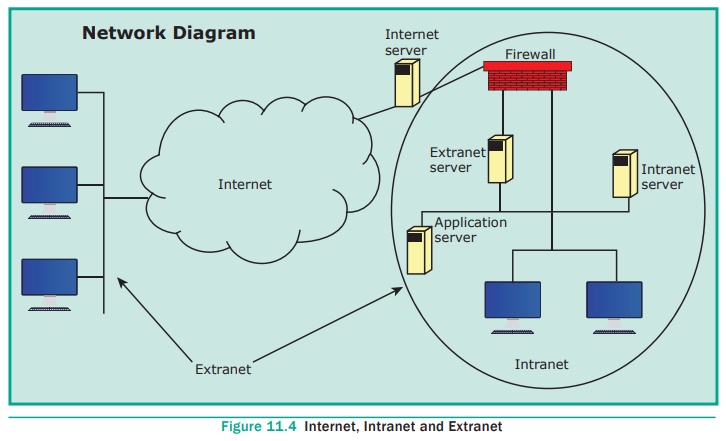 Internet of Things refers to the digital interconnection of everyday objects (home applicances, wearable devices or automobiles) with the Internet. The ‘thing’ in IoT refers to objects that have been assigned an IP address and have the ability to collect and transfer data over a network without manual assistance or intervention. 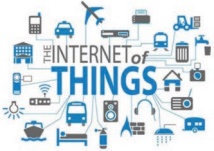 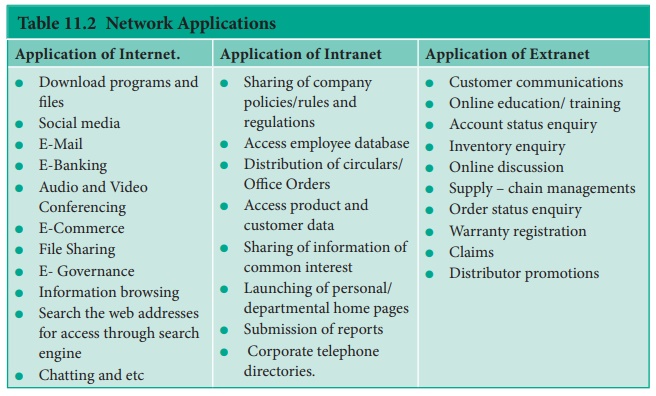 A mobile network or cellular network as it is made up of a large number of signal areas called cells. These cells join to form a large coverage area. Users can cross into different cells without losing their connection.

Within each cell there is a base station, which sends and receives the mobile signals. A mobile device will connect to the nearest or least base station. The base stations are connected to digital exchange where the communication is sent to other telephone

or data networks. Cells will often be smaller in size in large towns, as the number of users in the area is more. Communication over mobile network is made up of voice, data, images and text messages. See Figure 11.5 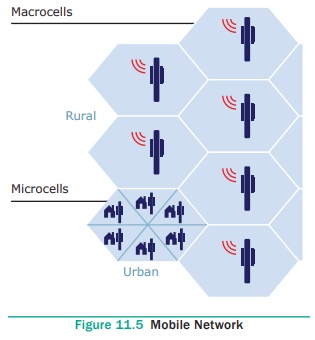 Mobile networking assign to the technology supports voice/data, network connectivity using via radio transmission solution. The common application of mobile networks is mobile phones, tablets, etc.. In the past, wireless communications largely used circuit switching to carry only voice over a network, but now currently both data and voice are being transmitted over both circuit via switched networks and packet-switched networks.

The generation of mobile networks are as follows.

During the initial periods the mobile systems were based on analog transmission. NMT stands for Nordic Mobile Telephone communication. They had a very low traffic density of one call per radio channel, and a very poor voice quality, and they used unsure and unencrypted transmission, which leads to the spoofing of its identities.

Later the second generation of mobile systems were placed on digital transmission with GSM. GSM stands for (Global System for Mobile communication) was most popular standard which is used in second generation, using 900MHz and 1800MHz for the frequency bands. GSM mobile systems grown digital transmission using SIM. SIM stands for (Subscriber Identity Module) technology to authenticate a user for identification and billing purposes, and to encrypt the data to prevent listen without permission (eavesdropping). The transmission used as TDMA. TMDA stands for (Time Division Multiple Access) and CDMA stands for (Code Division Multiple Access ) method to increase the amount of information transported on the network. Mobility is supported at layer 2, which stops seamless roaming across assorted access networks and routing domains. This means that each operator must cover the entire area or have agreements in place to permit roaming.

GPRS was introduced here, this is the excess period of mobile networking development, between 2G and 3G. GPRS stands for( General Packet Radio Service ).GPRS is a data service which enables mobile devices to send and receive messages, picture messages and e-mails. It allows most popular operating speeds of up to 115kbit/s, latterly maximum of 384kbit/s by usingEDGE. EDGE stands for EDGE (Enhanced Data rates for Global Evolution). GSM data transmission rates typically reached 9.6kbit/s.

The term Li-Fi was first used by Harald Haas, Professor in Edinburgh University. The computer scientists achieved speeds of 224 gbps in the lab and research is going on. The biggest revolution in the Internet world is going to happen

Mobility still supported at layer 2, and hence like 2G it still prohibits seamless roaming beyond heterogeneous access networks and routing domains. The transmission were band frequencies between 1900 and 2200 MHz. All UMTS license holders at the UK holds a 20 year license with the condition that 80% population coverage is achieved by 31 December 2007. The present third generation licensed operators in the UK can be seen below as at August 2004.

4G is at the research stage. 4G was based on an adhoc networking model where there was no need for a fixed infrastructure operation. Adhoc networking requires global mobility features (e.g. Mobile IP) and connectivity to a global IPv6 network to support an IP address for each mobile device. Logically roaming in assorted IP networks (for example: 802.11 WLAN, GPRS and UMTS) were possible with higher data rates, from 2Mbit/s to 10–100Mbit/s, offering reduced delays and new services. Mobile devices will not expect on a fixed infrastructure, they will require enhanced intelligence to self configure in adhoc networks and having a routing capabilities to route over a packet-switched network.

5G is the stage succeeds the 4G (LTE/ WiMAx), 3G(umts) and 2G(GSM) syetems. 5G targets to perform the high data rate, reduced latency, energy saving, cost reduction, higher system, capacity, and massive device connectivity. The two phases of 5G, First one will be Release-15 complete by March 2019,Second one Release-16 is expected to complete at March2020, for submission to the ITU(International Telecommunication Union) as a candidate IMT-2020 technology. The ITU IMT – 2020 provides speed up to 20 gigabits per second it has been demonstrated with millimeter waves of 15 gigahertz and higher frequency. 3 GPP standard includes any network using New Radio software. 5G New Radio can access at lower frequencies from 600 MHz to 6 GHz. Speed in the lower frequencies are only modest higher than 4G systems, estimated at 15% to 50% faster. 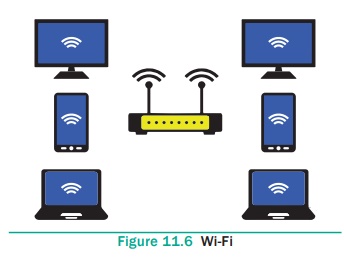 ADVANTAGES: Benefits of Wi-Fi are

● It provides connection to Internet.

● It allows remote places to benefit from connectivity.

RFID used radio waves to read and capture information stored on a tag attached to an object. Tag can be read from several feet away and does not need to be in direct-line-of-sight of the reader to be tracked. RFID has been made up of two parts a reader and a tag or a label. RFID tags are installed with a transmitter and receiver.

RFID component on the tags has two parts: a microchip which stores and processes the information, and the antenna to receive and transmit a signal. The Tag replies the information from its memory bank. The reader will transmit to read the result to RFID computer program.

2. Battery powered RFID tag is installed with small battery that powers the broadcast of information

Main Components of a RFID System

● A RFID tag: It has silicon microchip attached to a small antenna and mounted on a substrate. See Figure 11.7 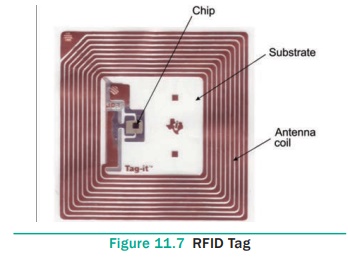 ● A reader: It has a scanner with antennas to transmit and receive signals, used for communication. See Figure 11.8 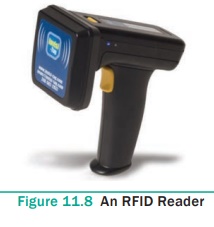 ● A Controller: It is the host computer with a Microprocessor which receives the reader input and process the data.

1. Active RFID system: The tag has its own power source. These systems are used for larger distances and to track high value goods like vehicles.

2. Passive RFID system: The tag gets power from a reader antenna to the tag antenna. They are used for shorter range transmission.