Chapter: Clinical Dermatology: The skin and the psyche

The presence of disfiguring skin lesions can distort the emotional development of a child: some become withdrawn, others become aggressive, but many adjust well.

The presence of disfiguring skin lesions can distort the emotional development of a child: some become withdrawn, others become aggressive, but many adjust well. The range of reactions to skin disease is therefore wide. At one end lies indifference to grossly disfiguring lesions and, at the other, lies an obsession with skin that is quite normal. Between these extremes are reactions ranging from natural anxiety over ugly skin lesions to disproportionate worry over minor blemishes.

A chronic skin disease such as psoriasis can undoubtedly spoil the lives of those who suffer from it. It c interfere with work, and with social activities of all sorts including sexual relationships, causing sufferers to feel like outcasts. The heavy drinking of so many men with severe psoriasis is one result of these pressures. An experienced dermatologist will be on the lookout for depression and the risk of suicide, as up to 10% of patients with psoriasis have had suicidal thoughts. However, these reactions do not necessarily correlate with the extent and severity of the eruption as judged by an outside observer. Who has the more disabling problem: someone with 50% of his body surface covered in psoriasis, but who largely ignores this and has a happy family life and a productive job, or one with 5% involvement whose social life is ruined by it? The concept of ‘body image’ is useful here.

All of us think we know how we look, but our ideas may not tally with those of others. The nose, face, hair and genitals tend to rank high in a person’s ‘corporeal awareness’, and trivial lesions in those areas can gen-erate much anxiety. The facial lesions of acne, for example, can lead to a huge loss of self-esteem.

This is the term applied to distortions of the body image. Minor and inconspicuous lesions are magnified in the mind to grotesque proportions.

This is a form of dysmorphobia. The clinician can find no skin abnormality, but the distress felt by the patient leads to anxiety, depression or even suicide. Such patients are not uncommon. They expect derma-tological solutions for complaints such as hair loss, or burning, itching and redness of the face or genitals. The dermatologist, who can see nothing wrong, can-not solve matters and no treatment seems to help. Such patients are reluctant to see a psychiatrist although some may suffer from a monosymptomatic hypochond-riacal psychosis.

These patients sustain single hypochondriacal delusions for long periods, in the absence of other recognizable psychiatric disease. Some are eccentric and live in social isolation. Some believe that they have syphilis, AIDS or skin cancer. In dermatology, many of these patients have the delusion that their skin is infested with parasites.

This term is better than ‘parasitophobia’, which implies a fear of becoming infested. Patients with delusions of parasitosis are unshakably convinced that they are already infested. No rational argument can convince them that they are not; the pest control agencies that they have called in, and their medical advisers therefore must both be wrong. Symptoms include odd sensations of crawling and biting, and patients often bring to the clinic a box of specimens of the ‘parasite’ at different stages of its supposed life cycle. These must be examined microscopically but usually turn out to be fragments of skin, hair, cloth-ing, haemorrhagic crusts or unclassifiable debris. The skin changes may include gouge marks and scratches, but it is convenient to consider these patients separately from those with dermatitis artefacta. 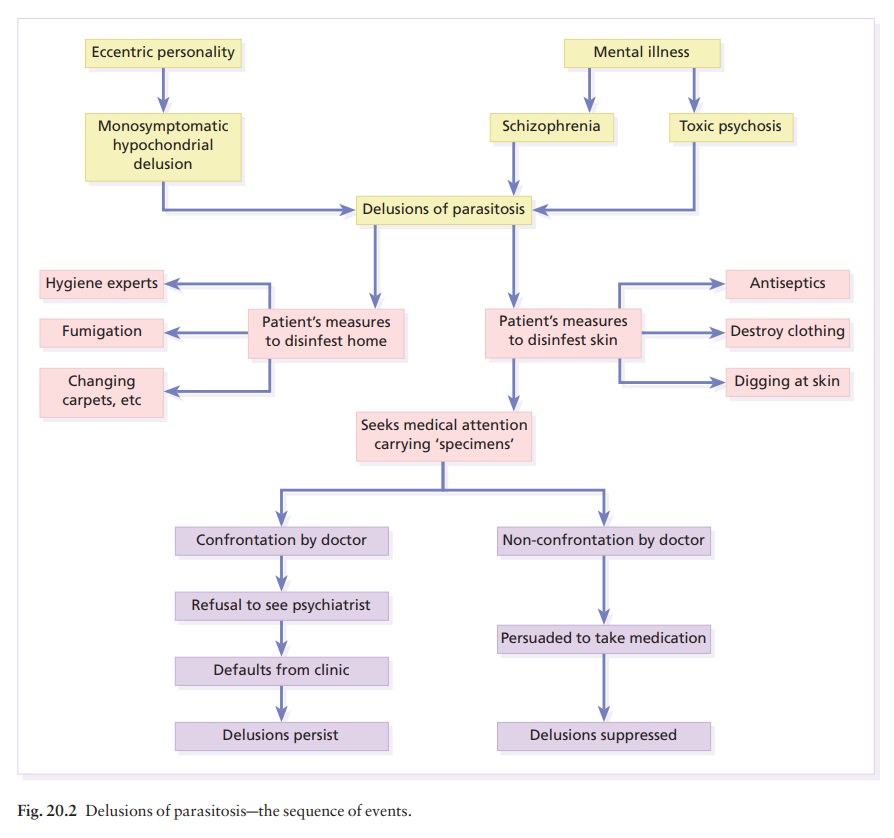 These patients become angry if doubts are cast on their ideas, or if they are referred to a psychiatrist. How could treatment for mental illness possibly be expected to kill parasites? Family members may share their delusions and much tact is needed to secure any cooperation with treatment. Direct confrontations are best avoided; sometimes it may be best simply to treat with psychotropic drugs, explaining that these may be able to help some of the symptoms.

The delusions of a few of these patients are based on an underlying depression or schizophrenia, and of a further few on organic problems such as vitamin deficiency or cerebrovascular disease. These disorders must be treated on their own merits. However, most patients suffer from monosymptomatic hypochon-driacal delusions, which can often be suppressed by treatment with drugs, accepting that these will be needed long-term. Otherwise, the outlook for resolu-tion is poor. Pimozide was once the most popular treatment for this condition but high doses carry car-diac risks. If pimozide is used, an electrocardiogram (ECG) should be performed before starting treatment and the drug should not be given to those with a prolonged Q-T interval or with a history of cardiac dysrhythmia. Patients on pimozide in excess of 16 mg daily need periodic ECG checks. Tardive dyskinesia may develop and persist despite withdrawal of the drug. Risperidone, olanzapine and sulpiride are reasonable, and perhaps safer, alternatives. Some patients gain insight and relief. Others hint that their parasites still persist although this no longer disables them.

Here the skin lesions are caused and kept going by the patient’s own actions, but parasites are not held to be to blame. Patients with dermatitis artefacta deny self-trauma but, naturally, if treatment is left to them to carry out, their problems do not improve. Lesions will heal under occlusive dressings, but this does not alter the underlying psychiatric problems, and lesions may recur or crop up outside the bandaged areas. Different types of dermatitis artefacta are listed in Table 20.1. 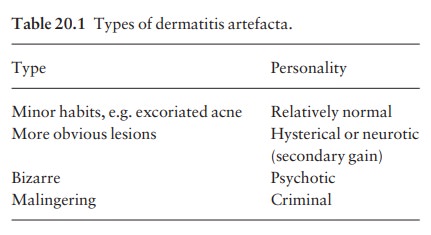 The lesions favour accessible areas, and do not fit with known pathological processes. The diagnosis is often difficult to make, but an experienced clinician will suspect it because there are no primary lesions and because of the bizarre shape or grouping of the lesions, which may be rectilinear or oddly grouped (Fig. 20.3). Areas damaged by burning (Fig. 20.4), corrosive chemicals (Fig. 20.5), or by digging have their own special appearance. 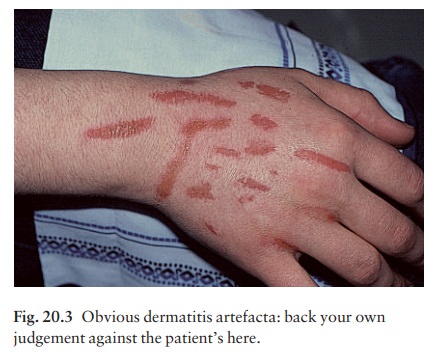 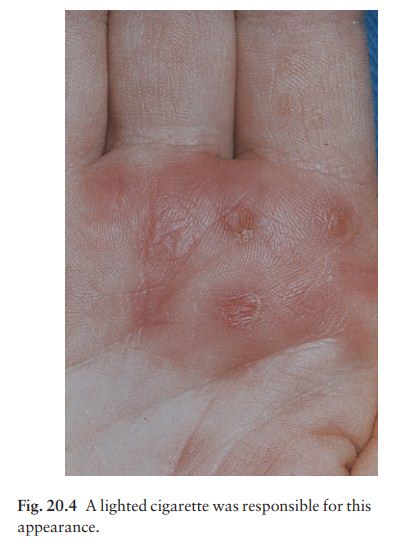 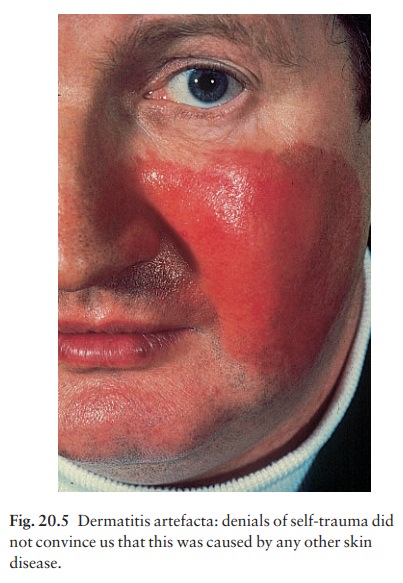 More subtle changes are seen in ‘dermatological pathomimicry’, in which patients reproduce or ag-gravate their skin disease by deliberate contact with materials to which they know they will react.

Apart from frank malingerers, the patients are often young women with some medical knowledge, perhaps a nurse. Some form of ‘secondary gain’ from having skin lesions may be obvious. The psycholo-gical problems may be superficial and easily resolved, but sometimes psychiatric help is needed and the artefacts are part of a prolonged psychiatric illness. A few patients respond to banal treatments if given the chance to save face. Direct confrontation and accusations are usually best avoided, and the con-dition may last for some years.

Patients with neurotic excoriations differ from those with other types of dermatitis artefacta in that they admit to picking and digging at their skin. This habit affects women more often than men and is most active at times of stress. The clinical picture is mixed, with crusted excoriations and pale scars, often with a hyperpigmented border, lying mainly on the face, neck, shoulders and arms (Fig. 20.6). The condition may last for years and psychiatric treatment is seldom successful. 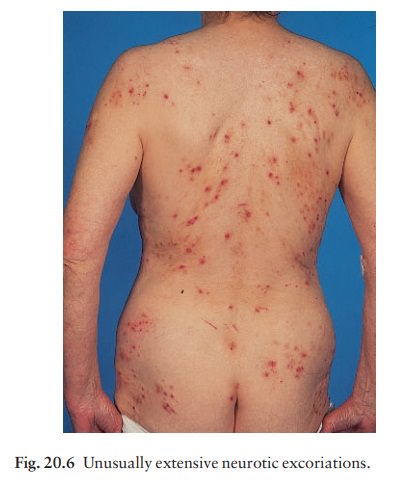 Here the self-inflicted damage is based to some extent on the lesions of acne vulgaris, which may in them-selves be mild, but become disfiguring when dug and squeezed to excess. The patients are usually young girls who may leave themselves with ugly scars. A psychiatric approach is often unhelpful and a daily ritual of attacking the lesions, helped by a magnifying mirror, may persist for years.

This term refers to areas of itchy lichenification, per-petuated by bouts of scratching in response to stress. The condition is not uncommon and can occur on any area of skin. In men, lesions are often on the calves; in women, they favour the nape of the neck where the redness and scaling look rather like psoriasis. Some examples of persistent itching in the anogenital area are caused by lichen simplex there.

Patients with localized neurodermatitis develop scratch responses to minor itch stimuli more readily than controls. Local therapy does not alter the under-lying cause, but topical steroids, sometimes only the most potent ones, ameliorate the symptoms. Occlusive bandaging of suitable areas clears only those lesions that are covered. 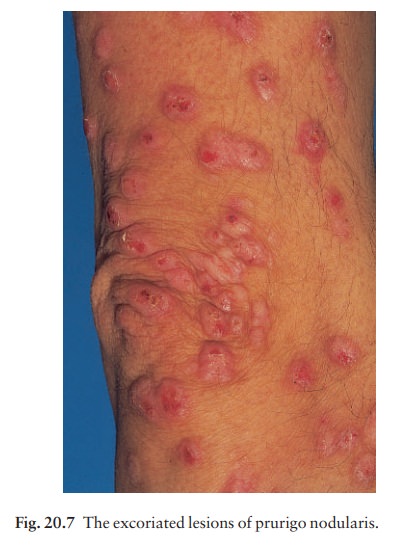 Nodular prurigo (Fig. 20.7) may be a variant on this theme as manifested in atopic subjects, who scratch and rub remorselessly at their extremely itchy nodules.

Trichotillomania is too dramatic a word for what is usually only a minor comfort habit in children, rank-ing alongside nail-biting and lip-licking. Perhaps the term should be dropped in favour of ‘hair-pulling habit’. It is usually of little consequence, and children who twist and pull their hair, often as they are going to sleep, seldom have major psychiatric disorders. The habit often goes away most quickly if it is ignored. However, more severe degrees of hair-pulling are some-times seen in disturbed adolescents and in those with learning difficulties; then the outlook for full regrowth is less good, even with formal psychiatric help.

The diagnosis can usually be made on the history, but some parents do not know what is going on. The bald areas do not show the exclamation-mark hairs of alopecia areata, or the scaling and inflammation of scalp ringworm. The patches are irregular in outline and hair loss is never complete. Those hairs that remain are bent or broken, and of variable length.