In previews pages, we discussed about random variables. Random variable is a function of the possible outcomes of a experiment. But, it does not include the concept of time. In the real situations, we come across so many time varying functions which are random in nature. In electrical and electronics engineering, we studied about signals.

Here both deterministic and random signals are functions of time. Hence it is possible for us to determine the value of a signal at any given time. But this is not possible in the case of a random signal, since uncertainty of some element is always associated with it. The probability model used for characterizing a random signal is called a random process or stochastic process.

A random process is a collection (ensemble) of real variable {X(s, t)} that are functions of a real variable t where s ∈ S, S is the sample space and t ∈T. (T is an index set).

Here after we denote the random process {X(s, t)} by {X(t)} where the index set T is assumed to be continuous process is denoted by {X(n)} or {Xn}.

A comparison between random variable and random process

Outcome is mapped into a number x.

A function of the possible outcomes of an experiment and also time i.e, X(s, t)

Outcomes are mapped into wave from which is a fun of time 't'.

We can classify the random process according to the characteristics of time t and the random variable X = X(t) t & x have values in the ranges –∞< t <∞ and –∞< x <∞.

If 'S' is continuous and t takes any value, then X(t) is a continuous random variable.

If 'S' assumes only discrete values and t is continuous then we call such random process {X(t) as Discrete Random Process.

If 'S' is a continuous but time 't' takes only discrete is called discrete random sequence. Example: Let Xn denote the outcome of the nth toss of a fair die.

CLASSIFICATION  OF  RANDOM  PROCESSES  BASED  ON  ITS  SAMPLE

A Process is called non-deterministic process if the future values of any sample function cannot be predicted exactly from observed values.

A process is called deterministic if future value of any sample function can be predicted from past values.

A random process is said to be stationary if its mean, variance, moments etc are constant. Other processes are called non stationary.

For a specific t, X(t) is a random variable as it was observed earlier.

A random process is called stationary to order, one or first order stationary if its 1st order density function does not change with a shift in time origin.

Show that a first order stationary process has a constant mean. 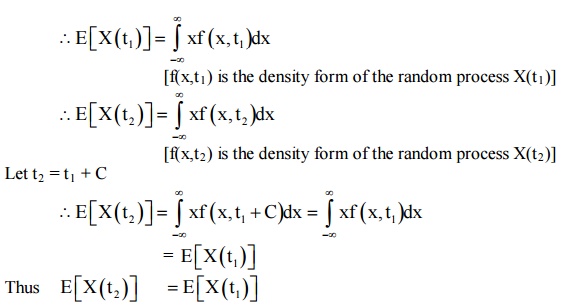 If the process is first order stationary, then Mean = E(X(t)] = constant

Process (SSS Process) if all its finite dimensional distribution are invariance under translation of time 't'.

6 Jointly - Stationary in the Strict Sense

{X(t)} and Y{(t)} are said to be jointly stationary in the strict sense, if the joint distribution of X(t) and Y(t) are invariant under translation of time.

7Auto Correlation of a Random Process

Let X(t1) and X(t2) be the two given numbers of the random process {X(t)}. The auto correlation is

8 Auto Covariance of A Random Process 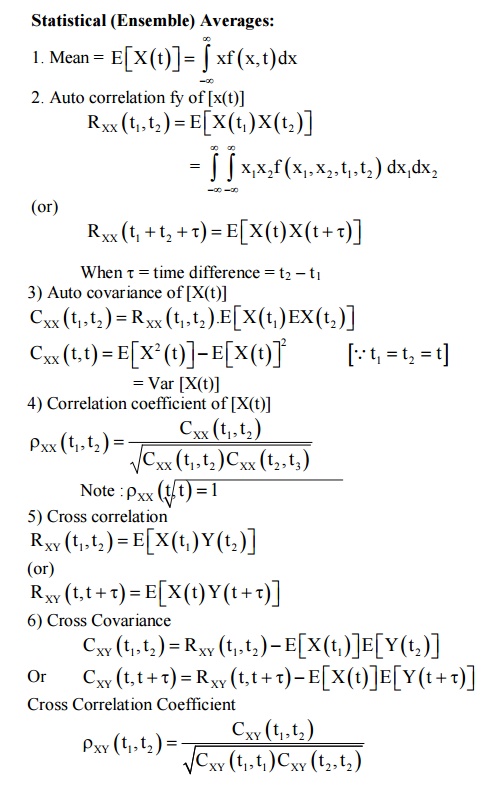 A random process X(t) is said to be stationary in the strict sense, it its statistical characteristics do not change with time.

1) Consider the RP X(t) = Cos (w0t +θ) where θis uniformly distributed in the interval -π to π. Check whether X(t) is stationary or not? Find the first and Second moments of the process.

Where θis uniformly distributed in (-π, π) 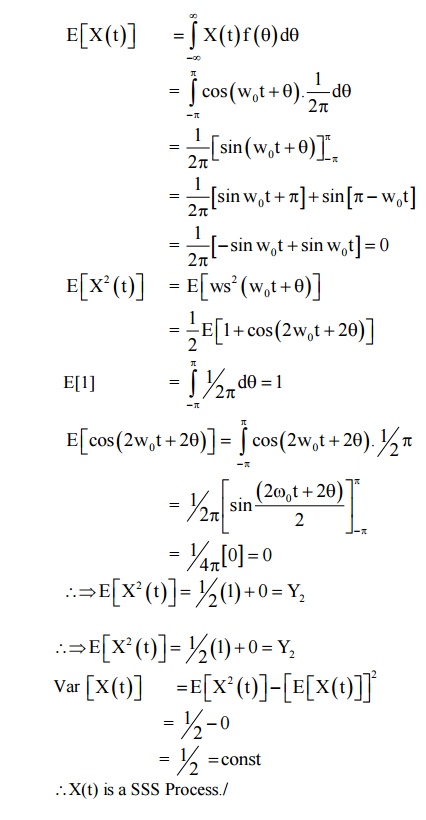 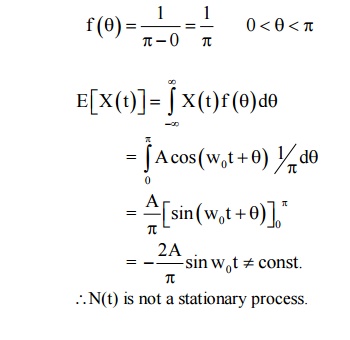 ∴N(t) is not a stationary process.

If a random process X(t) is WSS then it must also be covariance stationary. In X(t) is WSS

Which depends only on the time difference. Hence X(t) is covariance stationary. 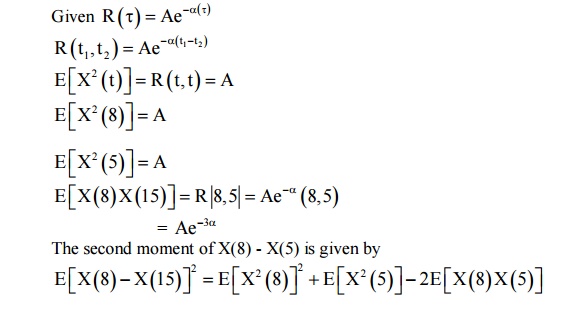 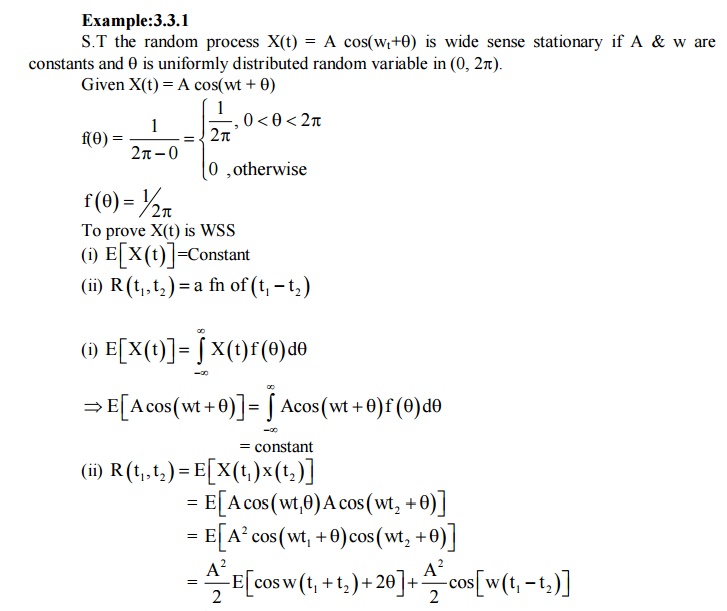 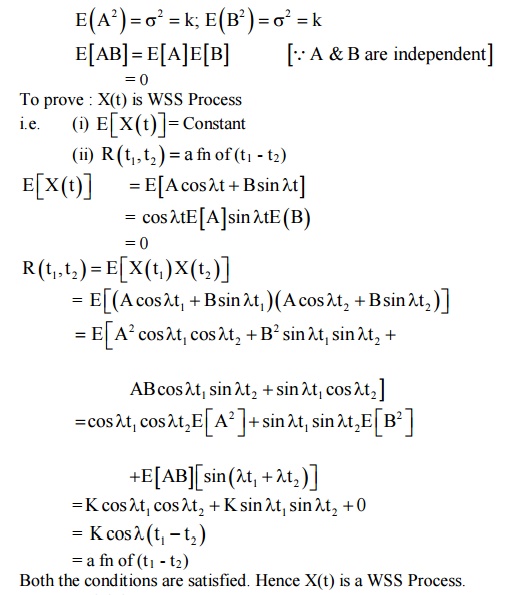 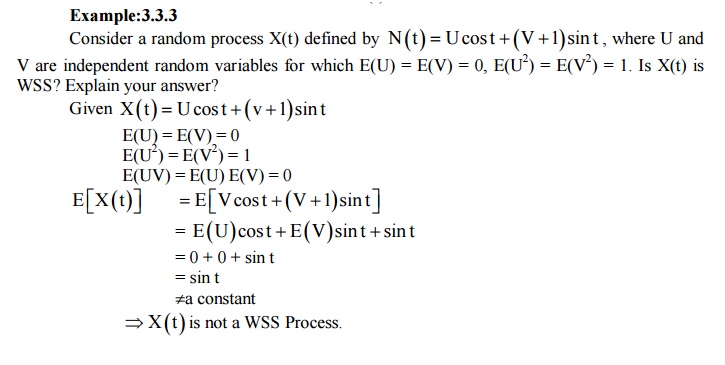 SSS        Process of order two is a WSS Process and not conversely.

A random process that is not stationary in any sense is called as evolutionary process.

Given an example of stationary random process and justify your claim.

Let us consider a random process X(t) = A as (wt + θ) where A &ω are custom and 'θ' is uniformlydistribution random Variable in the interval (0, 2π). 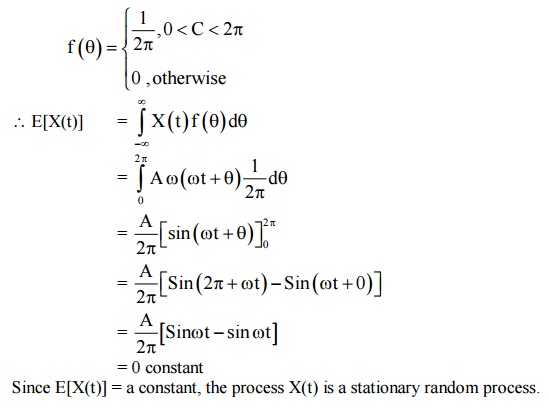 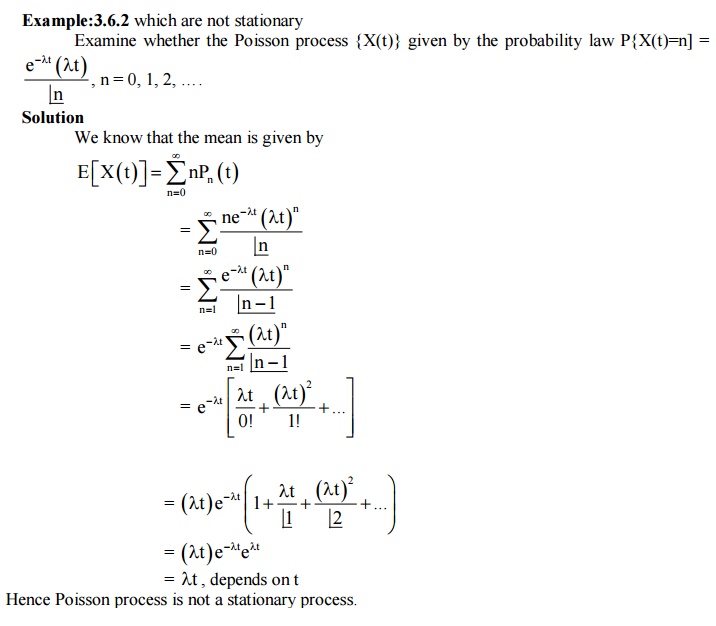 Hence Poisson process is not a stationary process.

Ergodic Process are processes for which time and ensemble (statistical) averages are interchangeable the concept of ergodicity deals with the equality of time and statistical average.

A random process X(t) is said to be Markov Process, it 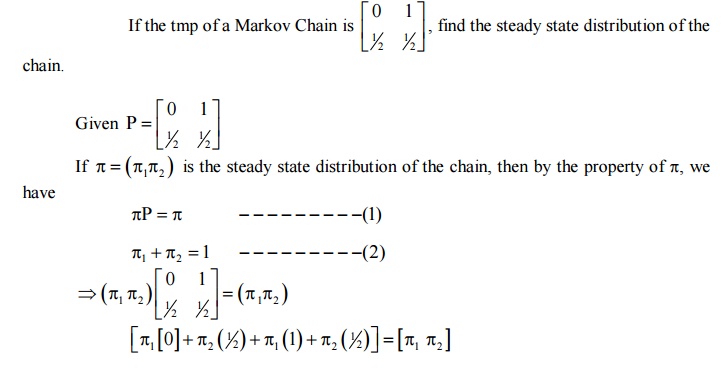 π1= The fraction of signals that are recognizable [R]

π2 = The fraction of signals that are highly distorted [D] 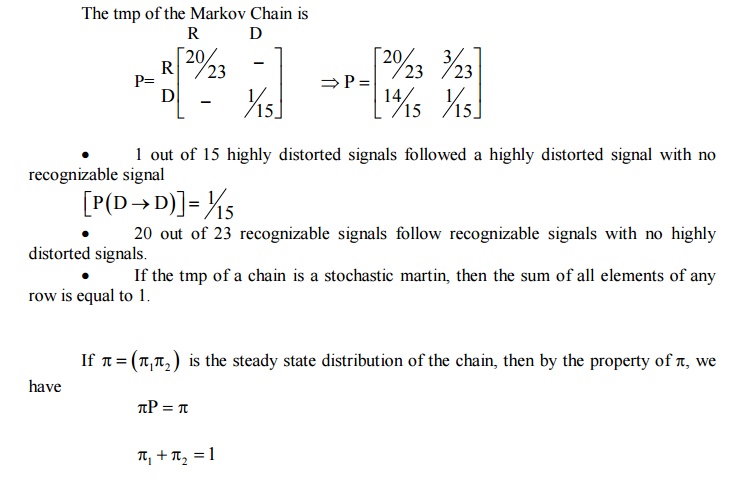 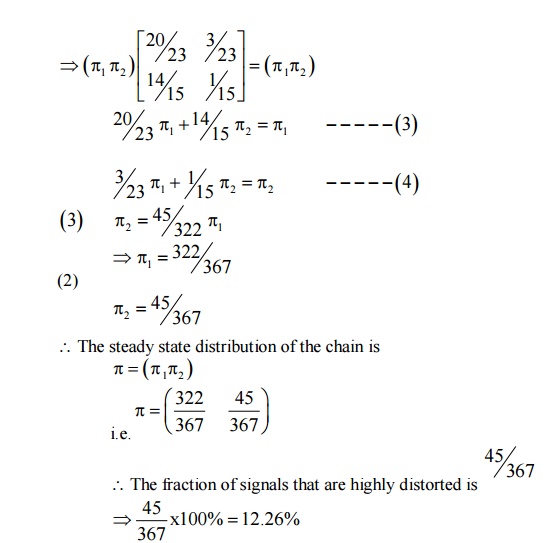 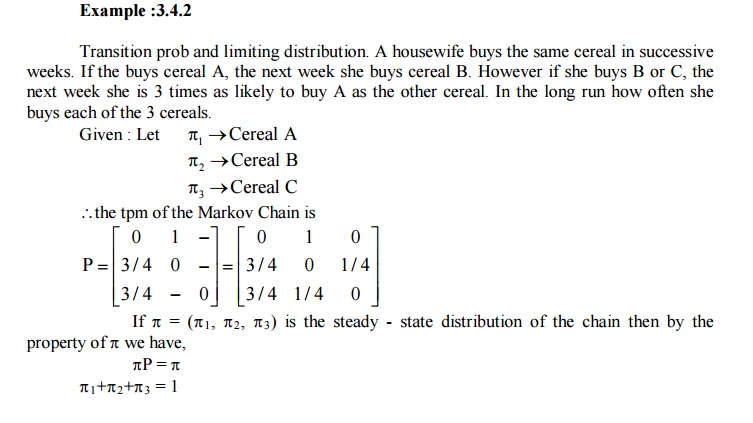 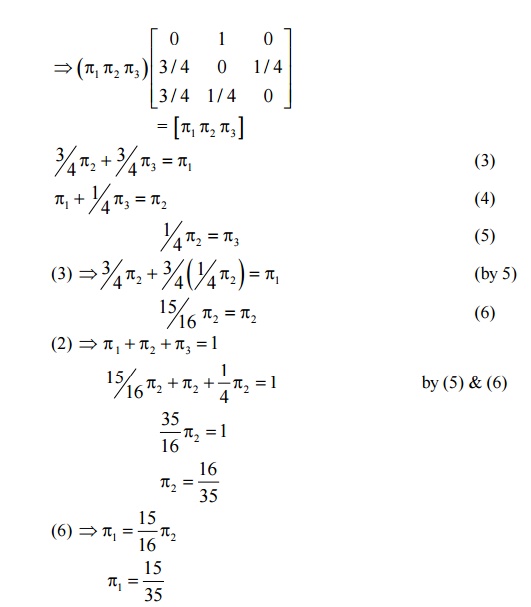 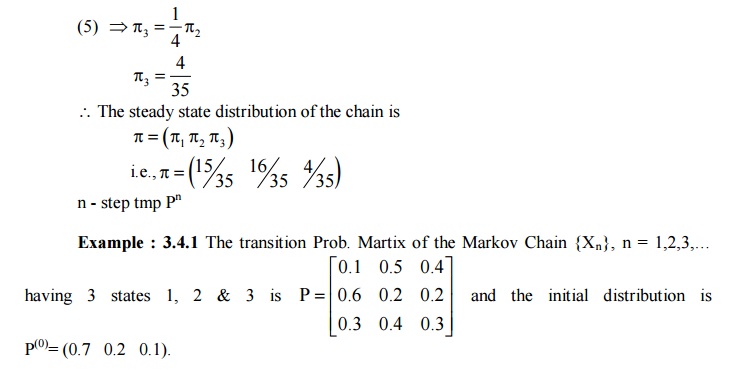 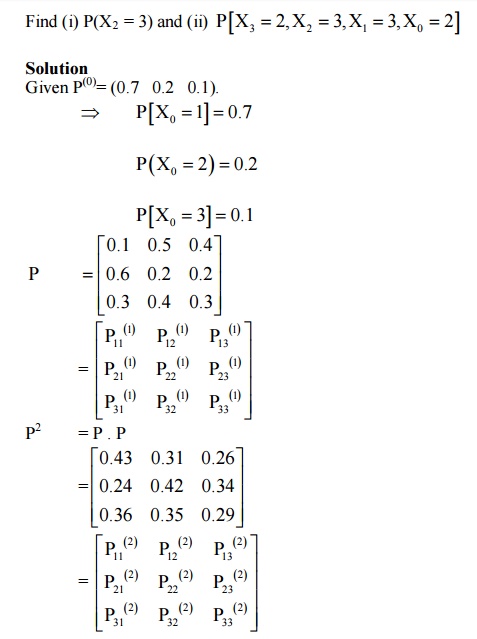 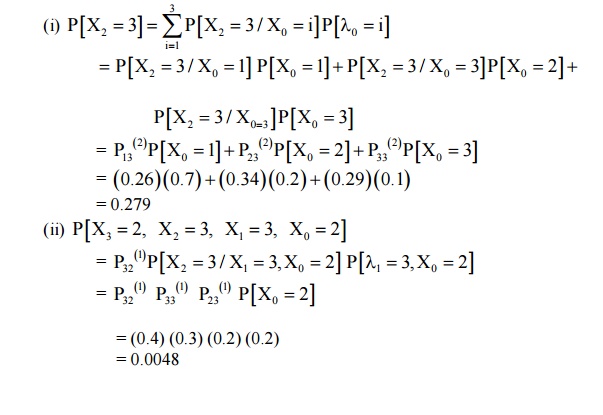 ii. Find also the unconditional prob. That it will rain after 3 days with the initial Prob. Of state ) and state 1 as 0.4 & 0.6 respectively. 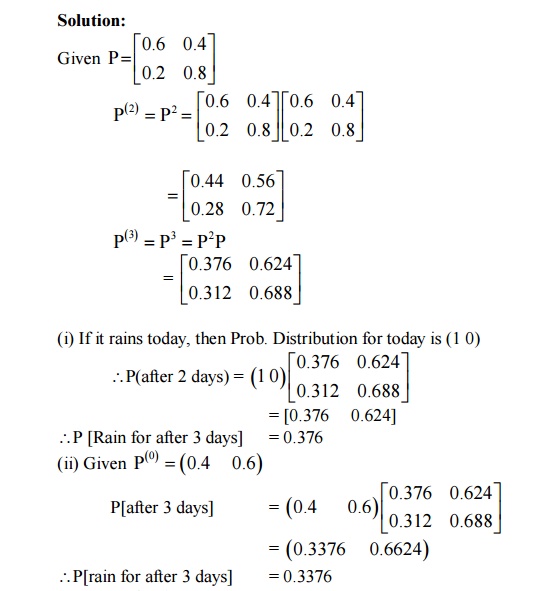 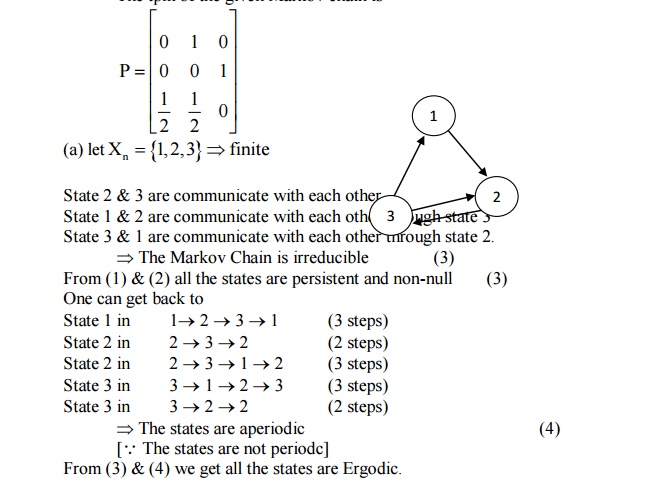 Let {X(t)} be a random process with constant mean µ and let XT be its time average. Then {X(t)} is mean ergodic if

A random process {X(t)} is said to be markovian if

2.A different equation is markovian.

We define the Markov Chain as follows

transition probability from state a i to state a j at the nth step. 3.The tmp of a Markov chain is a stochastic matricx

The Poisson Process is a continuous parameter discrete state process which is very useful model for many practical situations. It describe number of times occurred. When an experiment is conducted as a function of time.

Property Law for the Poisson Process

A random telegraph process is a discrete random process X(t) satisfying the following:

iii.  The number of occurrence N(t) from one value to another occurring in any interval of length 't' is a Poisson process with rate λ, so that the probability of exactly 'r' transitions is 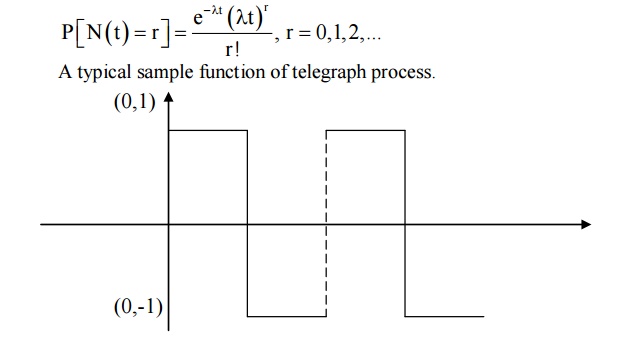 Note: The process is an example for a discrete random process.

If X(t) represents the no. of occurrences of certain even in (0, t), then the discrete random process {X(t)} is called the Poisson process, provided the following postulate are satisfied.

X(t) is independent of the no. of occurrences of the event in any interval prior and after the interval (0, t) 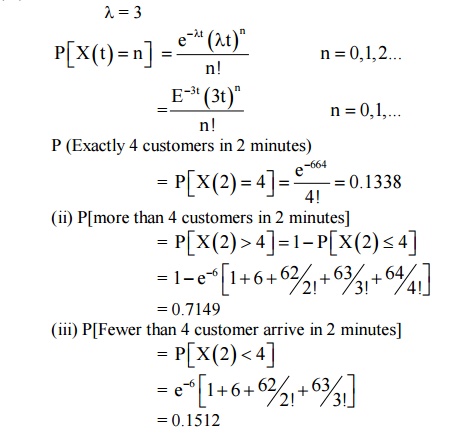 If customers arrive at a counter in accordance with a Poisson process with a mean rate of 2 per minute, find the Prob. that the interval 6/w two consecutive arrivals is (i) more than 1 minute (ii) B/W 1 & 2 minute (iii) 4 minutes or less

4. A man either drives a car or catches a train to go to office each day. He never goes 2 days in a row by train but if he drives one day, then the next day he is just as likely to drive again as he is to travel by train. Now suppose that on the first day of week, the man tossed a fair die and drove to work if a 6 appeared. Find 1) the probability that he takes a train on the 3rd day. 2). The probability that he drives to work in the long run. 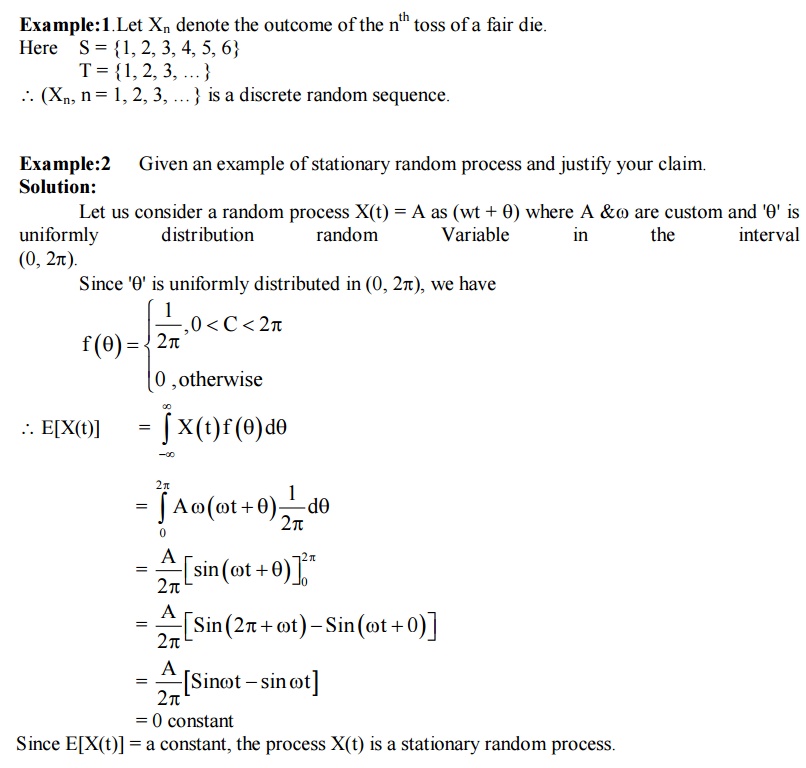 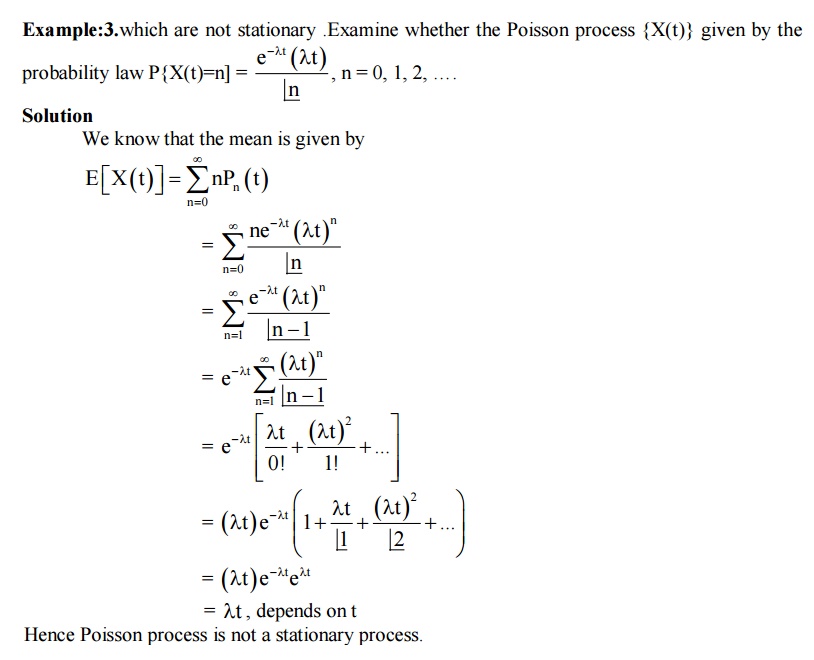