Rabies involves the development of severe neurologic symptoms and signs in a patient who was previously bitten by an animal.

Rabies involves the development of severe neurologic symptoms and signs in a patient who was previously bitten by an animal. The neurologic abnormalities are very characteristic, with a relentlessly progressive excess of motor activity, agita-tion,  hallucinations,  and  salivation.  The  patient  appears  to  be  foaming  at  the mouth and has severe throat contractions if swallowing is attempted. The neuro- logic abnormalities are explained by spread of the virus from the bite wound into the CNS and then centrifugally to the autonomic nervous system.

Rabies exists in two epizootic forms, urban and sylvatic. The urban form is associated with unimmunized dogs or cats, and the sylvatic form occurs in wild skunks, foxes, wolves, raccoons, and bats but not rodents or rabbits.

Introduction of an infected animal into a different geographic area can lead to infection of many new members of that species. For example, raccoon hunters apparently are to blame for the sudden appearance of raccoon strain rabies in West Virginia and Virginia in 1977. Prior to that time, the near-est cases of raccoon rabies were found several hundred miles away in South Carolina. The hunters are believed to have imported infected raccoons from another state. Since 1977, raccoon rabies has spread from West Virginia and Virginia to 12 northeastern states.

Human infection, or the much more common infection of cattle, is incidental, is blind-ended, and does not contribute to maintenance or transmission of the disease. In the United States, more than 75% of reported cases of rabies in animals occur among wildlife. Human exposures may be from wild animals or from unimmunized dogs or cats. In recent years, there has been a decrease of US cases to less than two per year, and bat exposure has been the source in almost all cases despite a resurgence of rabies in skunks and raccoons. An oc-casional case has resulted from aerosol exposure (eg, bat caves and no bite). Domestic ani-mal bites are very important sources of rabies in developing countries because of lack of enforcement of animal immunization. Infection in domestic animals usually represents a spillover from infection in wildlife reservoirs. Human infection tends to occur where ani-mal rabies is common and where there is a large population of unimmunized domestic ani-mals. Worldwide, the occurrence of human rabies is estimated to be about 15,000 cases per year, with the highest attack rates in Southeast Asia, the Philippines, and the Indian sub-continent.

The essential first event in human or animal rabies infection is the inoculation of virus through the epidermis, usually as a result of an animal bite. Inhalation of heavily contam-inated material, such as bat droppings, can also cause infection. Rabies virus first repli-cates in striated muscle tissue at the site of inoculation. Immunization at this time is presumed to prevent migration of the virus into neural tissues. In the absence of immu-nity, the virus then enters the peripheral nervous system at the neuromuscular junctions and spreads to the CNS, where it replicates exclusively within the gray matter. It then passes centrifugally along autonomic nerves to reach other tissues, including the salivary glands, adrenal medulla, kidneys, and lungs. Passage into the salivary glands in animals facilitates further transmission of the disease by infected saliva. The neuropathology of rabies resembles that of other viral diseases of the CNS, with infiltration of lymphocytes and plasma cells into CNS tissue and nerve cell destruction. The pathognomonic lesion is the Negri body (Fig 41-2), an eosinophilic cytoplasmic inclusion distributed throughout the brain, particularly in the hippocampus, cerebral cortex, cerebellum, and dorsal spinal ganglia. 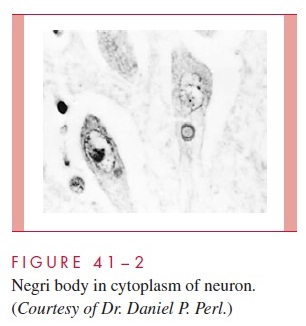