A decade has passed since the discovery that double-stranded RNA molecules (dsRNA) can trigger silencing of homologous genes, and it is now clear that RNA-mediated gene silencing is a widely conservedcellular mechanism in eukaryotic organisms.

RNAi is sequence-specific gene silencing at the post-transcription level, induced by double stranded RNA (dsRNA). The mediators of sequence-specific mRNA degradation are 21â€“23 nucleotides long, small interfering RNAs (siRNA) generated from longer dsRNAs by ribonuclease III cleavage activity (Fire et al., 1998; Cogoni and Macino, 2000; Hannon, 2002; Agrawal et al., 2003). The presence of RNAi machinery in insects has already been confirmed in earlier studies by introducing long dsRNA molecules into insects by means of using insect cell line (Zhang and Shi, 2002) or through injection into insect body (Soreq et al., 1994) and also via forced feeding (Dong and Friedrich, 2005). That siRNAs are powerful agents for gene silencing, even at low concentrations, and mediate post-transcriptional degradation. Systemic RNAi was first described in plants as spread of post transcriptional gene silencing. The first animal in which RNAi was shown to work systemically was C. elegans, where it has been thoroughly investigated. 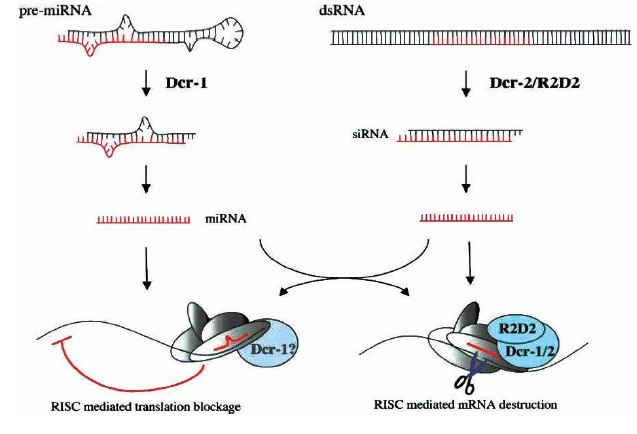 processed from double-stranded precursor molecules by Dcr-1 and Dcr-2, respectively, and stay attached to Dicer-containing complexes, which assemble into RISC. The degree of complementarity between the RNA silencing molecule (in red) and its cognate target determines the fate of the mRNA: blocked translation or immediate destruction.

Although current understanding of RNAi activity cannot provide us with a precise prediction of potency to each individual siRNA. Once the bioinformatics part is done, candidate siRNA can then be synthesized and tested in cell culture systems for knockdown efficiency. The off-target effect can also be checked with a microarray assay. The final goal of this stage is to identify several siRNAs that show high knockdown efficiency and minimal off-target effect at nanomolar or lower concentrations.