a. Harappa and Mohenjodaro

b. Delhi and Hyderabad

[Answer: a) Harappa and Mohenjodaro]

2. Coastal towns developed by the British were

d. All of these

3. A new trend of urbanisation began in the latter half of 19th century as a result of

a. Opening of Suez Canal

b. Introduction of steam navigation

b. for preaching their religion

[Answer: a) for trading]

5. Fort St. George was constructed by the British in

6. Which of the following port was the East India Company’s principal settlement until 1774?

1. The network of railroads in India was introduced in 1853.

2. Ripon rightly regarded as the Father of Local Self - Government in India.

3. The Government of India Act of 1919 introduced Dyarchy in the provinces.

4. Sir Josiah Child was responsible for the formation of the corporation.

5. Madras was officially renamed as Chennai in 1998. [Answer: False]

a. A is correct and R is Wrong

b. A is wrong and R is Correct

c. A is correct and R explains A

d. A is correct and R does not explain A

[Answer: c) A is correct and R explains A]

2. Which of the following statement(s) is/are not true?

ii.Day and Cogan were jointly responsible for the construction of Fort St. George.

iii. In 1969 the state of Madras was rechristened as Tamil Nadu.

3. Assertion (A): British built up their alternative capitals in hilly areas.

a. A is correct and R is Wrong

b. A is wrong and R is Correct

c. A is correct and R explains A

d. A is correct and R does not explain A

[Answer: c) A is correct and R explains A]

Answer: An urban area is one that has a high population density engaged in occupations other than food production, living in a highly built environment.

2. Hilly areas were distinctive features of colonial urban development. Why?

(i) The British coming from a cool temperate climate, found the hill stations protective from hot weather and epidemics.

(ii) So they built up the alternative capitals in cool areas.

4. State any four reason for the new trend of urbanization in the 19th century.

(i) Since the British needed strong military camps and established the cantonment towns.

(ii) Army people began to live in these places and gradually they were grown up into a city.

6. What were the regions covered in the Madras presidency during British regime?

Answer: The region covered in the Madras Presidency during the British regime covered were

(vi) Districts of Karnataka and various districts of southern Odisha.

(a) The British arrived in India for trading. Madras, Calcutta and Bombay became the important ports. They played important role in trade. These cities became the prominent commercial areas with tall European - styled buildings.

(b)  Fort St. George in Madras and Fort St. William in Calcutta were the best examples.

(a) The British occupied the Indian territory and political power by their military force. So they needed strong military camps and established the cantonments

(a) Hill stations were distinctive features of colonial urban development. Although Hill stations were not unknown, prior to their founding by the British in India, they were few and had a small population and were often visited for specific purpose.

(b) For e.g. Srinagar was a Mughal recreational centre, Kedarnath and Badrinath were Hindu religious Centres.

(a) Railway towns were also a type of urban settlements and were established in 1853 after the introduction of railways by the British.

(b) By the nature of railway transport, all the towns were located on the plains.

2. Trace the origin and growth of Madras.

Origin and Growth of Madras :

(a) The beginning of the city of Madras goes back to the earliest stages of British commercial enterprise in India. The English East India Company was started in 1600 A.D (C.E).

(b) The English, after some efforts secured the privilege of building a factory at Masulipatnam. It was well protected from the monsoon winds.

(c) The official grant for the land was given by Damarla Venkatapathy Nayak, the deputy of the Raja of Chandragiri (12km west of Tirupathi). Damarla gave British a piece of land between Cooum river and the Egmore.

(e) This fortified settlement came to be known as Fort St. George settlement. It is otherwise referred to as the White Town. While the nearby villages inhabited by local population was called as Black Town. Collectively the White Town and the Black Town were called Madras.

3. India became an agricultural colony of Britain. How?

(i) In the beginning, the policies of the British proved harmful to the process of urbanisation.

(ii) Later the economic policies followed by the British led to the rapid transformation of India’s economy into a colonial economy and development of cities.

(iv) There was a sudden collapse of the urban handicrafts industry.

(vii) The industrial revolution, high import duties and other restrictions imposed on the import of Indian goods into Britain and Europe led to the decline of Indian industries.

1. Make an album – ‘Making of Chennai’ (from early period till now)

2. Mark port cities, cantonment towns, hill stations on the outline map of India. (any four places from each) 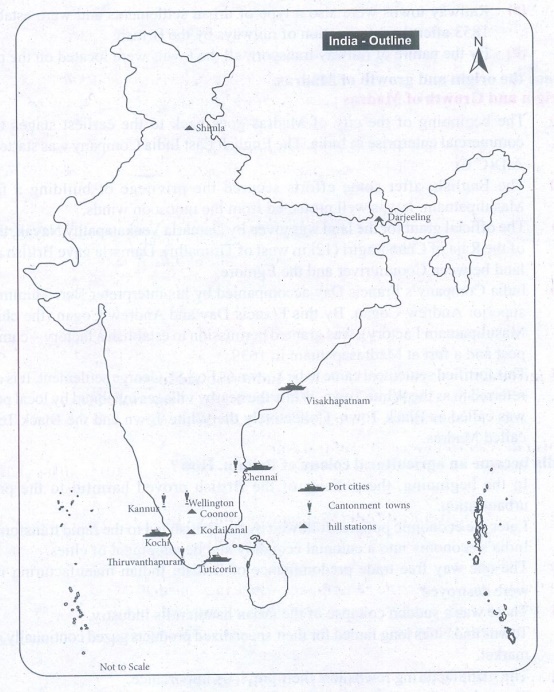 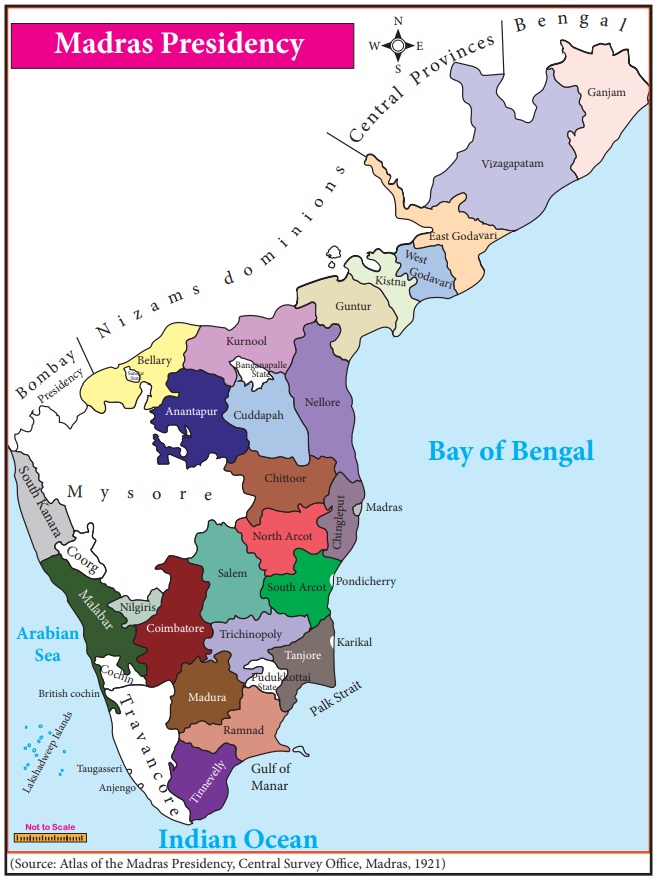