Thus in course of time, administrative headquarters emerged as the most important towns and cities of the country.

The British empire gradually consolidated and established an elaborate spatial structure of administration with an imperial capital, provincial capitals and district headquarters. The new rulers brought new officials, new institutions and new structure to these towns with a kacheri, cantonment, police station, jail treasury. Public garden, post office, schools, dispensary and above all a municipal committee.

Thus in course of time, administrative headquarters emerged as the most important towns and cities of the country. For example, by the beginning of 20th century, Calcutta, Bombay and Madras had become the leading administrative commercial and industrial cities of India. These cities became the central commercial area with buildings of European style. Sub urban railways, tram car and city buses gave the colonial cities a new look and status.

* In ancient times towns emerged around king’s palaces. During medieval times the towns functioned either fort city or port city.

* With the extension of domination British developed new towns depending on its location, purpose and resources.

* In the late 18th century Calcutta, Bombay and Madras rose as Presidency cities.

* Chennai was once a group of villages. Sir Francis Day of the East India Company was granted land in 1639 to setup factory which later came to be known as Chennai.

*On 17th July 1996, Madras was officially renamed as Chennai.

2. Urbanisation: the process of making an area more urban நகரமயமாதல்

3. Municipality: a town or district that has local government நகராட்சி

5. Rechristened: give a new name to பெயரிடப்பட்டது

6. Treasury: a place or building where treasure is stored கருவூலம்

Urban changes during the British period 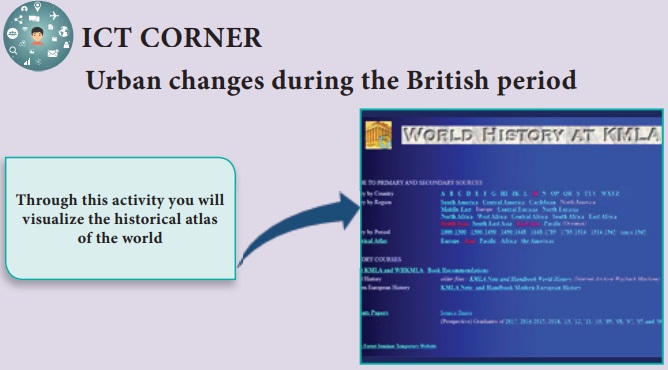 Step – 1 Open the Browser and type the URL given below (or) Scan the QR Code.

Step – 3 Scroll down to explore the pictorial map with descriptions

*If browser requires, allow Flash Player or Java Script to load the pag