A. Complete the following statements.

1. Everyone in the ship started to pray because they received a message about the formation of storm

2. Vasantha’s imagination run wild because she remembered her class teacher telling about a big storm

3. Vasantha made a lot of noise because a man tumbled over the railings into the wild sea

4. Vasantha could not see the rescue operation because the boat was too far for her to see what was happening

5. The captain presented a gift to Vasantha because of her immediate action in saving a man

B.  Identify the speaker / character.

2. A man fell into the sea. Please save him. [Answer: Vasantha]

4. He'll have to be given artificial respiration and kept warm. [Answer: The doctor]

Read the story once again and fill in the boxes. 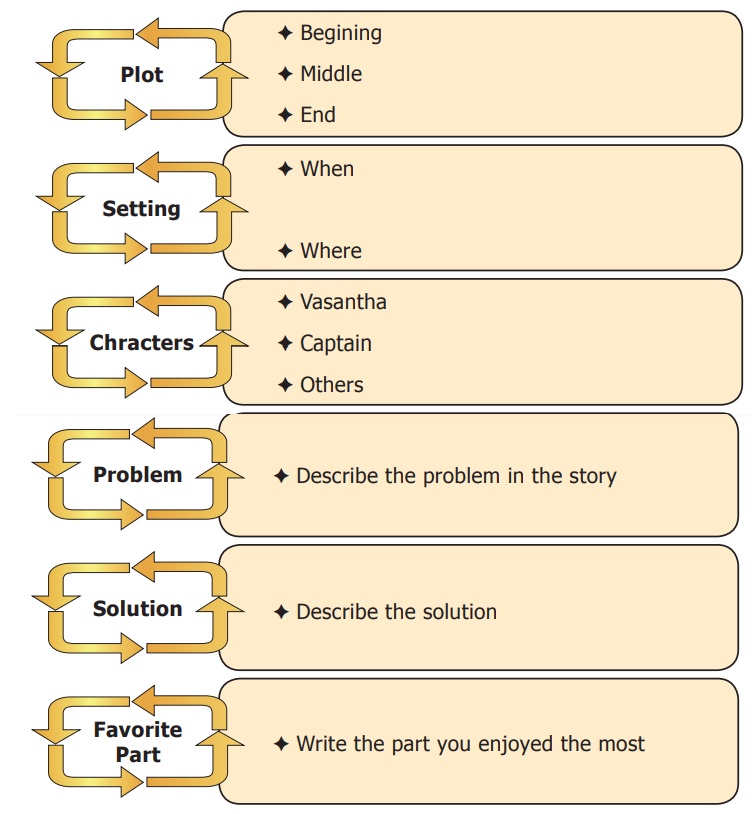 ♦ Beginning : Vasantha was on board a ship called S.S. Rajula. She was travelling to Singapore after her stay with her grandparents.

♦ Middle : Due to a strong wind, the ship rocked to and fro. Huge waves were dashing against it. A man on board tumbled over the railings into the wild sea. Vasantha shouted for help. The rescue officers saved him and he was sent for immediate medical care.

♦ End : The man was saved. The captain of the ship was pleased and presented her a model of a ship. Vasantha was the happiest person on board that day.

♦ When : She boarded a ship called S.S. Rajula which was going to Singapore.

♦ Where : At Madras Harbour.

1. A person standing next to Vasantha.

4. Another lady who was sitting beside Vasantha.

6. Two sailors who saved him.

♦ Describe the problem in the story :

When a huge wave lashed the ship, a man tumbled over the railings into the wild sea.

Vasantha alerted everyone to save the man. The Rescue team struggled and the two sailors dragged the man to the ship. Immediate medical care was given to him.

♦ Write the part you enjoyed the most :

Vasantha's immediate action in alerting the members of the ship to save the man.