Project, Connecting to Self, Step to Success

D. Read the incidents. Work in small groups to role play the situations in which they showed their presence of mind. Each group should perform the skit for the rest of the class. Share similar situations in the class.

MUMBAI: A brave 10-year-old girl applied her school lessons and saved 16 lives even as the fire at Crystal Towers in the Parel area of Central Mumbai killed four and injured another 16 people on Wednesday.

Zen Sadavarte, who is a class 3 student, was sleeping when her mother spotted the smoke at around 8 am. Zen was trapped on the 12th floor of the 16 storied-building where the fire had started. However, without getting deterred Zen showed presence of mind and applied the safety tips taught to her in school to save the lives of her family members and neighbours.

Upon spotting fire, as everybody rushed out for safety, an asthmatic girl was feeling breathless. Upon hearing her mother cry, Zen quickly took pieces of cloth from her house, wet them and urged her family and neighbours to cover their noses with them and breathe through it.

PUDHUCHERY: When at first C. Vijaykumar saw his son, V.N.C. Revin, running towards the security guard at the Jipmer auditorium, he did not know what had happened.

The two were walking in the institute’s campus last November when the incident occurred. On catching up, Mr. Vijaykumar understood that his son had spotted an electrical equipment sparking due to short circuit, and had gone up to the guard to inform him. Young Revin took his father’s phone and immediately dialled 101 to alert the fire brigade.

With his presence of mind, the boy was able to avert a major fire accident, and for this, he was awarded a bravery award by Chief Minister N. Rangasamy at the Independence Day celebrations last week.

E. Look at the picture. Browse the internet with the help of your teacher to get information about the little brave hearts of India.

Search for similar brave hearts in your locality.

Read the instructions and fill the nomination for NBA. 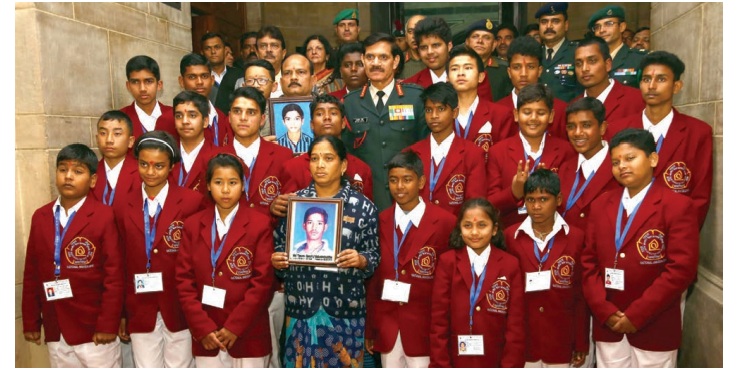 F. In each question below, there is a sentence in which some parts have been jumbled up. Rearrange these parts which are labelled P, Q, R and S to produce the correct sentence. Choose the proper sequence.

P: did not know

Q: he was nervous and

R: heard the hue and cry at midnight

After looking at the given parts P,Q,R and S

it can be concluded that the correct order will be:

When he → heard the hue and cry at midnight → he was nervous and → did not know → what to do.

so correct order is RQPS.

P: to watch the mountain

Q: of more than five miles

R: as they settled down

S: from a distance

R: to help our customers

S: who have instructions

P: and then to save himself

Q: was to save all the lives

R: entrusted to his care

S: the duty of a captain

S: she persisted in her mission

♦ To learn about the Reported speech in Past tense with examples.

♦ To check their knowledge in Simple past tense conversion into reported speech. 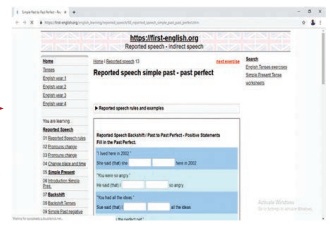 1. Type the URL link given below in the browser or scan the QR code.

2. Click Reported speech rules and examples and revise the rules of speech in converting a sentence in simple past tense.

3. You can see the interactive exercises in the conversion of simple past tense reported speech.

4. Complete all the questions to check your knowledge as well as to strengthen your learning in Reported speech.

** Images are indicatives only.