Python Variables and Operators: Book Back Questions and Answers

2.  The Python prompt indicates that Interpreter is ready to accept instruction.

3.  Which of the following shortcut is used to create new Python Program ?

4.  Which of the following character is used to give comments in Python Program ?

5.  This symbol is used to print more than one item on a single line.

7.Which of the following is not a Keyword in Python ?

8.Which operator is also called as Comparative operator?

9.Which of the following is not Logical operator?

10. Which operator is also called as Conditional operator?

1. What are the different modes that can be used to test Python Program ?

Ans. The modes that can be used to test Python program are

3. What are the different operators that can be used in Python ?

Ans. The operators that can be used in Python

4. What is a literal? Explain the types of literals ?

Ans. Literal is a raw data given in a variable or constant. In Python, there are various types of literals.

Ans. (i) An arithmetic operator is a mathematical operator that takes two operands and performs a calculation on them. They are used for simple arithmetic.

(ii) Most computer languages contain a set of such operators that can be used within equations to perform different types of sequential calculations.

2. What are the assignment operators that can be used in Python?

Ans. (i) Ternary operator is also known as conditional operator that evaluate something based on a condition being true or false.

(ii) It simply allows testing a condition in a single line replacing the multiline if-else making the code compact.

Ans. (i) ' In Python strings, the backslash "\" is a special character, also called the ’’escape” character.

(ii) It is used in representing certain whitespace characters: ”\t” is a tab, ”\n” is a newline, and ”\r” is a carriage return.

(iii) For example to print the message "It's raining", the Python command is

5. What are string literals? Explain.

Ans. (i) In Python, a string literal is a sequence of characters surrounded by quotes. Python supports single, double and triple quotes for a string.

(ii) A character literal is a single character surrounded by single„or double quotes. The value with triple-quote "' "' is used to give multi-line string literal.

strings = "This is Python"

multiline_str = "'This is a multiline string with more than one line code.'"

#End of the Program

This is a multiline string with more than one line code.

Ans. A script is a text file containing the Python statements. Python Scripts are reusable code. Once the script is created, it can be executed again and again without retyping. The Scripts are editable.

A - A script is a text frame

(1) All text file does not Python scripts

(ii) An untitled blank script text editor will be displayed on screen. 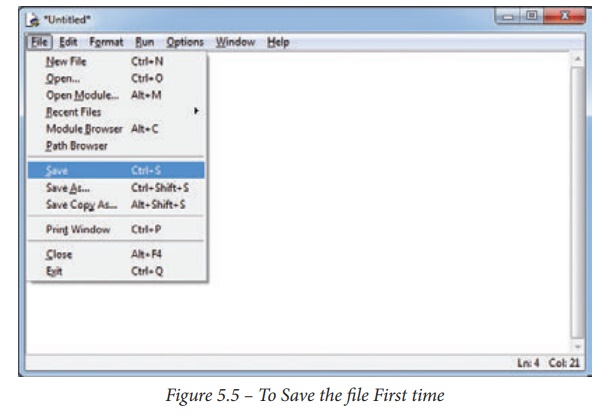 (ii) Now, Save As dialog box appears on the screen. 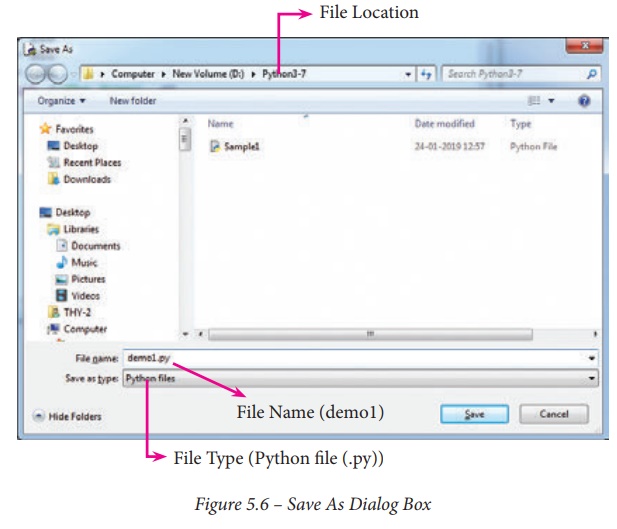 (iii) In the Save As dialog box, select the location where you want to save your Python code, and type the file name in File Name box. Python files are by default saved with extension .py. Thus, while creating Python scripts using Python Script editor, no need to specify the file extension.

(iv) Finally, click Save button to save your Python script.

(ii) If code has any error, it will be shown in red color in the IDLE window," and Python describes the type of error occurred. To correct the errors, go back to Script editor, make corrections, save the file using Ctrl + S or File → Save and execute it again.

(iii) For all error free code, the output will appear in the IDLE window of Python.

Ans. Input and Output Functions: A program needs to interact with the user to accomplish the desired task; this can be achieved using Input- Output functions. The input() function helps to enter data at run time by the user and the output function print() is used to display the result of the program on the screen after execution.

(i) In Python, input( ) function is used to accept data as input at run time. The syntax for input() function is,

(ii) Where, prompt string in the syntax is a statement or message to the user, to know what input can be given.

(ii) If a prompt string is used, it is displayed on the monitor; the user can provide expected data from the input device. The input( ) takes whatever is typed from the keyboard and stores the entered data in the given variable.

(iv) If prompt string is not given in input() no message is displayed on the screen, thus, the user will not know what is to be typed as input.

(vii) Note that in example-2, the input( ) is not having any prompt string, thus the user will not know what is to be typed as input. If the user inputs irrelevant data as given in the above example, then the output will be unexpected. So, to make your program more interactive, provide prompt string with input().

(viii)The input ( ) accepts all data as string or characters but not as numbers. If a numerical value is entered, the input values should be explicitly converted into numeric data type. The int( ) function is used to convert string data as integer data explicitly. We will learn about more such functions in later chapters.

(xi) Example 4: Alternate method for the above program

(i) In Python, the print() function is used to display result on the screen. The syntax for print() is as follows :

print (“string to be displayed as output ” )

print (“String to be displayed as output ”, variable)

(iv) The print () evaluates the expression before printing it on the monitor.

(v) The print () displays an entire statement which is specified within print (). Comma (,) is used as a separator in print () to print more than one item.

3. Discuss in detail about Tokens in Python

■ An Identifier is a name used to identify a variable, function, class, module or object.

■ Identifiers must not be a python keyword.

■ Python does not allow punctuation character such as %,$, @ etc., within identifiers.

(ii) Keywords: Keywords are special words used by Python interpreter to recognize the structure of program. As these words have specific meaning for interpreter, they cannot be used for any other purpose.

(iii) Operators: In computer programming languages operators are special symbols which represent computations, conditional matching etc. The value of an operator used is called operands. Operators are categorized as Arithmetic, Relational, Logical, Assignment etc. Value and variables when used with operator are known as operands.

(iv) Delimiters: Python uses the symbols and symbol combinations as delimiters in expressions, lists, dictionaries and strings. Following are the delimiters.

(v) Literals : Literal is a raw data given in a variable or constant. In Python, there are various types of literals.