Kabir is probably the most important cultural figure of medieval India. 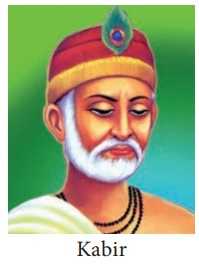 Kabir is probably the most important cultural figure of medieval India. His iconoclastic poetry which ridiculed ostentatiousness and ritual, and emphasized the universality of god won many adherents. Little concrete historical evidence is available on his life. He was probably a weaver. Said to be a disciple of Ramananda, he learnt Vedanta philosophy from him. According to the popular Tazkirah-i-Auliya- i-Hind (Lives of Muslim Saints), he was a disciple of the Muslim Sufi, Shaikh Taqi. Kabir was a religious radical who denounced with equal zest the narrowness of sectarianism, both Hindu and Islam. His message appealed to the lower classes of Hindu community. The most salient features of his teachings is denunciation of polytheism, idolatry, and caste. He was equally unsparing in his condemnation of Muslim formalism. He was a true seeker after God, and did his best to break the barriers that separated Hindus from Muslims. What appealed to the millions of his followers through the ages, however, is his passionate conviction that he had found the pathway to God, a pathway accessible to the lowest as well as the highest. His poetry is still recited across large parts of India. 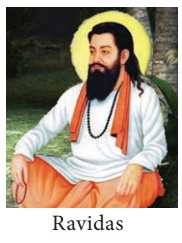 Ravidas was a poet saint of the bhakti movement during the 15th to 16th century. Venerated as a guru (teacher) in the regions of Punjab, Rajasthan, Maharashtra and Madhya Pradesh, the devotional songs of Ravidas made a lasting impact upon the bhakti movement. The life details of Ravidas are uncertain and contested. Most scholars believe he was born in a family of tanners. Ravidas was one of the disciples of the bhakti saint-poet Ramananda. Ravidas’ devotional songs were included in the Sikh Scriptures. Ravidas spoke against social divisions of caste and gender, and promoted unity in the pursuit of personal spiritual freedoms 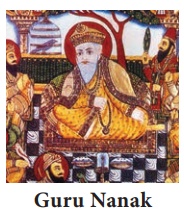 The saint with the biggest institutional influence was Guru Nanak (1469–1539) who founded the Sikh religion which shows undoubted syncretic influence. As a monotheistic religion Sikhism emphasized the oneness of god and adherence to a strict morality. Over two centuries, under the leadership of its ten gurus, Sikhism expanded swiftly in the Punjab region winning numerous adherents. Sikh teachings resulted in the creation of a strong sense of community. The politics of the times created conflicts with the Mughal empire leading to persecution which resulted in the martyrdom of its gurus. Guru Govind Singh was the last guru. After him the Granth Sahib was considered the guru. While the teachings of Guru Nank is the Adi Granth. The Guru Granth Sahib, part from the teachings of its other gurus, incorporates the writings of many Bhakti poets and Sufi saints such as Ramananda, Namadeva, Kabir and Sheikh Farid. 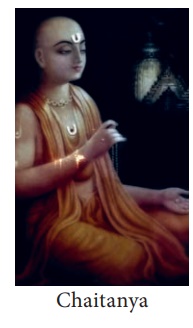 Chaitanya of Bengal represents an aspect of the bhakti movement that is very different from that seen in the lives and teachings of Kabir and his successors. Chaitanya’s concern, unlike that of Kabir, was not with Chaitanya bringing people to an understanding of a God, beyond all creeds and formulations; it was to exalt the superiority of Krishna over all other deities. It was, in other words, a revivalist, not a syncretic movement, a return to a worship of Vishnu under one of his most appealing forms, the loving ecstatic Krishna.

The Bengal Vaishnavites did not try to reform Hinduism. Instead, they emphasized devotion to Krishna. Chaitanya, however, made disciples from all classes. He popularised the practice of group devotional singing accompanied by ecstatic dancing. His movement became popular in Bengal and Orissa. 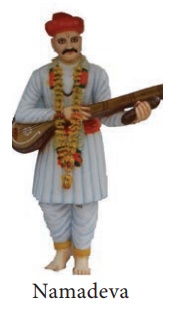 Namadeva, a son of a tailor and an inhabitant of the village of Naras- Vamani in Satara district of Maharashtra, under the influence of Saint Janadeva, was converted to the path of bhakti. A staunch devotee of Vitthala of Pandarpur, Namdeva spent much of his time in worship along with his followers, chanting mostly in his own verses. He wrote many abhangs (songs composed and sung by saints in Maharashtra in praise of God’s glory) in Marathi and Hindi. He travelled as far as Punjab where his teachings became so popular that they were later absorbed in the Guru Granth. Love god with all your heart to lead a pious life surrendering everything to him with steadfast devotion is the essence of his message.

While Chaitanya of Bengal belonged to the philosophical school of Madhavacharya (a chief advocate of Dvaita school of vedhanta), Ramananda was of Ramanuja’s philosophical thought. 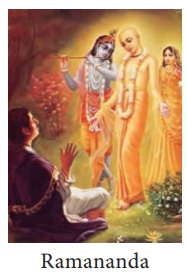 RamanandawasbornatPrayag(Allahabad) and received his higher education in Hindu religious philosophy at Banaras and joined the school of Ramanuja as a preacher. He visited the holy places of North India and preached Vaishnavism. Ramananda introduced radical changes in Vaishnavism by founding his own sect based on the doctrine of love and devotion to Rama and Sita. He preached equality before God. He rejected caste system, particularly the supremacy of Brahmins as the sole custodians of Hindu religion. The people from the lower strata of the society became his followers. His twelve disciples included Ravidas, Kabir and two women. Ramananda was the first to preach his doctrine of devotion in Hindi, the vernacular language. It gained him a good deal of popularity among the people of all classes. His followers were divided into conservative and radical schools.

Mirabai was born in Kudh of Merta district of Rajasthan. She was the great granddaughter of Rana Jodhaji, founder of Jodhpur. She was married to Bhoj Raj, son of Rana Sanga of Mewar. She became a devotee of Lord Krishna, left the palace and began singing her songs (bhajans) and preaching the path of love on God. Mirabai preached the worship of God in the name of Krishna and stressed that no one should be deprived of His divine grace on the ground of birth, poverty, age and sex. 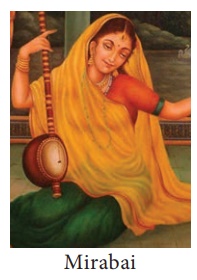 Her devotional songs and lyrics constitute a rich cultural heritage. Her bhajans are sung with fervour to this day. Her teachings carried the message of divine worship to almost every Hindu household.

Sur Das lived at the court of Akbar and was popularly known as the blind bard of Agra. Sur Das is believed to have been a disciple of Vallabacharya who was a Vaishnava preacher in the Sultanate period. Vallabhacharya was the founder of Pushtimarga (way of grace) . Sur Das preached religion of love and devotion to a personal God. He wrote inspiring and      moving poems, Hindi poems about Lord Krishna. Krishna’s bal lila constitutes the first great theme of Sur Das poetry. According to him, love is a sublimated theme representing the irresistible attraction of the gopis of Brindavan towards Krishna. 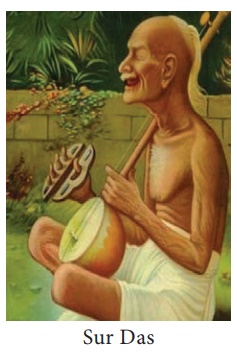 The intensity of passion displayed by the gopis is an expression of the natural attraction of the human spirit towards the divine soul. His popular works are Sur Sagar, Sur Saravali and Sahitya Lehari. His monumental work Sur Sagar or Sur’s Ocean is a story of Lord Krishna from the birth to the departure for Mathura.

Tuka Ram was born in 1608 in a village near Poona, Maharashtra. He was a contemporary of Maratha Shivaji and saints like Eknath and Ramdas. After his early life as a trader he started spending his time singing devotional songs in praise of his favourite deity Lord Vithoba of Pandarpur. 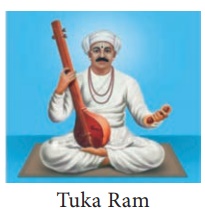 Tuka Ram believed in a formless God.Accordingtohim,itwasnotpossibleto enjoin spiritual joy with worldly activities. He stressed the all -pervasiveness of God. He rejected Vedic sacrifices, ceremonies, pilgrimages, idol worship, etc. He also preached the virtue of piety, forgiveness and peace of mind. He spread the message of equality and brotherhood. He tried to foster Hindu-Muslim Unity. Some of his verses are devoted to this theme. He wrote his abhangas in Marathi