Shortening in steel that occurs as soon as Fi is transferred to the concrete member and the member as a whole shortens.

Note: The value of Fo may not be known, but it is not necessary, as the losses from Fi to Fo small percentage of Fi . Total accuracy is relative anyway, as Ec - the young's modulus of concrete cannot be determined accurately. 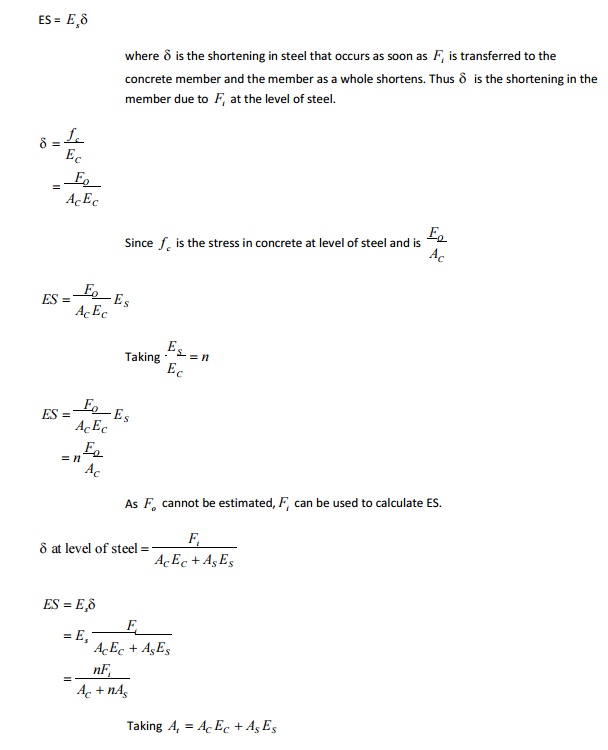 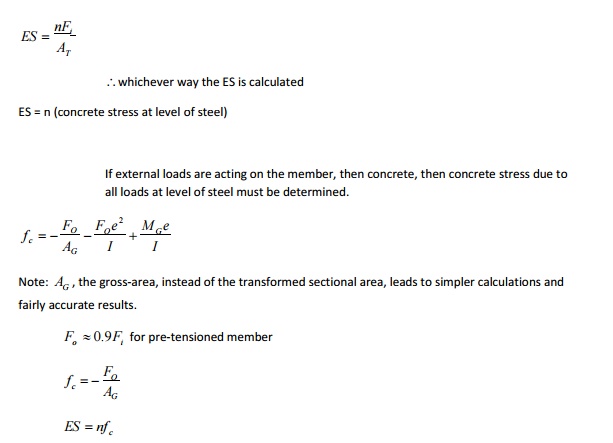 Among the many factors affecting creep are volume to surface ratio, age of concrete at time of pre- stress, relative humidity, type of concrete (lightweight / normal). Creep is assumed to occur in the member after permanent loads are imposed after pre-stress. Creep occurs over a long period of time under sustained load. Part of initial compressive strain induced in concrete immediately after transfer is reduced by the tensile strain produced by superimposed permanent loads.

Therefore for bonded members, loss due to creep

Factors like volume to surface ratio, relative humidity, time from end of moist curing to application of pre-stress, affect shrinkage in concrete. Shrinkage is time-dependant and about 80% of the final loss due to shrinkage occurs in the first year and 100% after several years.

When elongation is sustained over pre-stressing cable for a long time, the pre-stress will decrease gradually. The RE - loss due to relaxation depends on type of steel, time, as well as the ratio of fi/fp i where fi is the initial pre-stress and fp is the characteristic strength of steel.

In post-tensioning, when the jack is released, the full pre-stress is transferred to the anchorage and they tend to deform, allowing the tendon to slacken. Friction wedges will slip a little before they grip the wire firmly. So, in post-tensioning the wedges are positively engaged before the jack is released. In pre- tensioning also, the anchorage slip is compensated for during stressing operation.

The loss is caused by a fixed shortening of the anchorages, so the percentage loss is higher in shorter wires than in long ones.

Frictional loss comprise of two parts: (1) The length effect and (2) The curvature effect. The length effect or the wobble effect of the duct is the friction that will exist between straight tendon and the surrounding material. This loss is dependant on the length and stress in the tendon, the coefficient of friction between the contact materials, the workmanship and the method used in aligning and obtaining the duct.

The curvature effect is the loss due to intended curvature of the tendon. This again depends on the coefficient of friction between the materials and the pressure exerted by the tendon on the curvature.

For un-bonded tendon, lubrication, in the form of grease and plastic tube wrapping can be used to advantage.

For bonded tendon lubricant in the form of water soluble oils are used during stressing operation and flushed off with after before grouting.

Jacking from both ends of the beam will also reduce loss due to friction.

For straight or moderately curved structures, with curved or straight cables, the value of pre-stressing force Px at a distance x meters from tensioning end and acting in the direction of the tangent to the curve of the cable, shall be calculated as below:

Where Po = pre-stressing force in the pre-stressed steel at the tensioning end acting in the direction of the tangent to the curve of the cable, ? = cumulative angle in radians through which the tangent to the cable profile has turned between any two points under consideration, ? = coefficient of friction in curve; unless otherwise proved by tests, ? may be taken as: 0.55 for steel moving on smooth concrete, 0.30 for steel moving on steel fixed to duct, and 0.25 for steel moving on lead, k = coefficient for wobble or wave effect varying from 15 × 10-4 to 50 × 10-4 per meter. The expansion of the equation for Px for small values of (?? + kx) may be Px = Po (1 - ?? - kx). 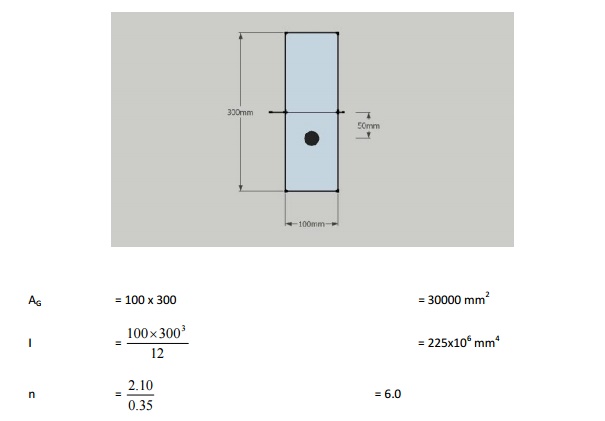 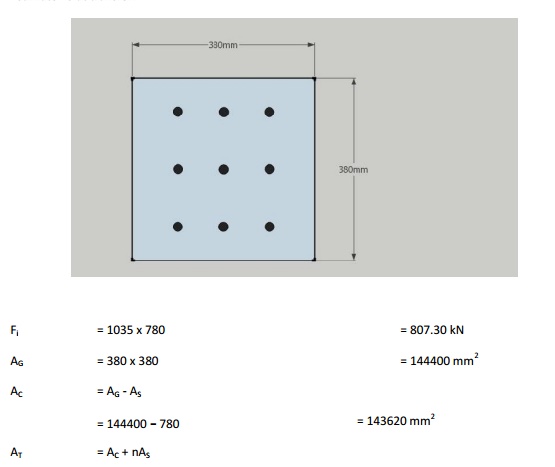 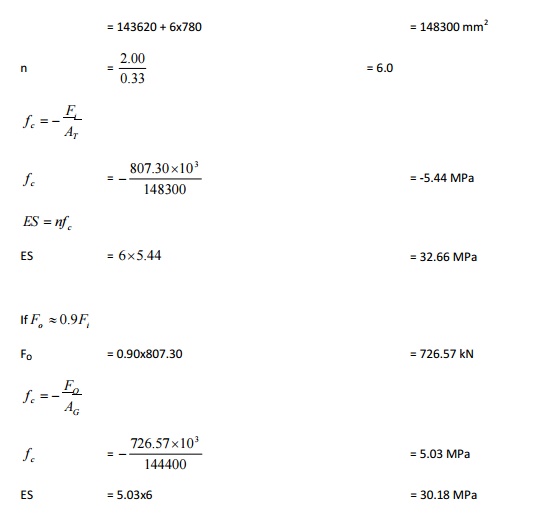 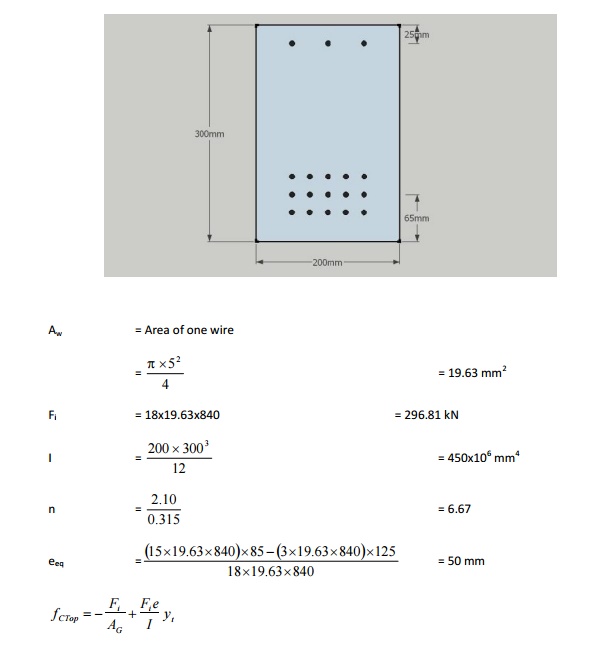 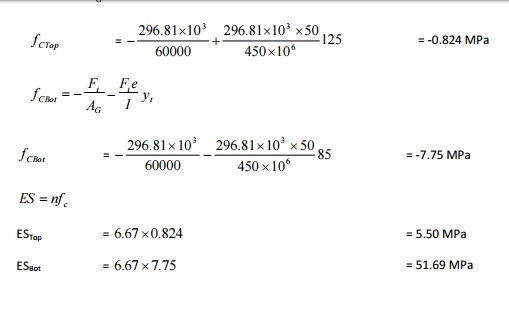 To calculate ES in Post-tensioned beam 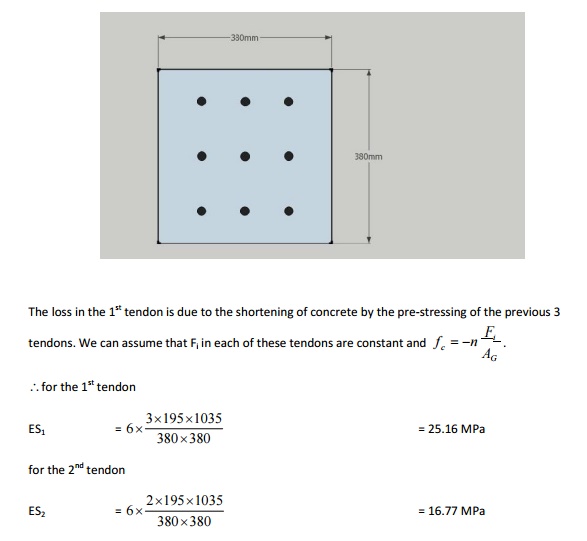 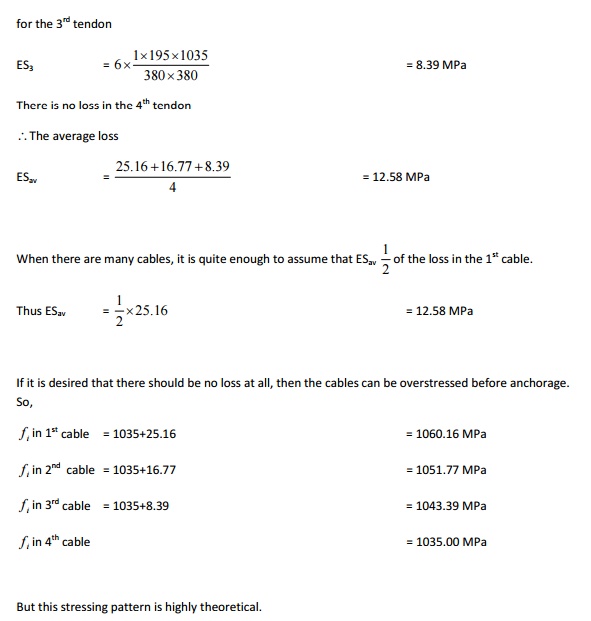 To calculate CR, SH and RE in post-tensioned beam 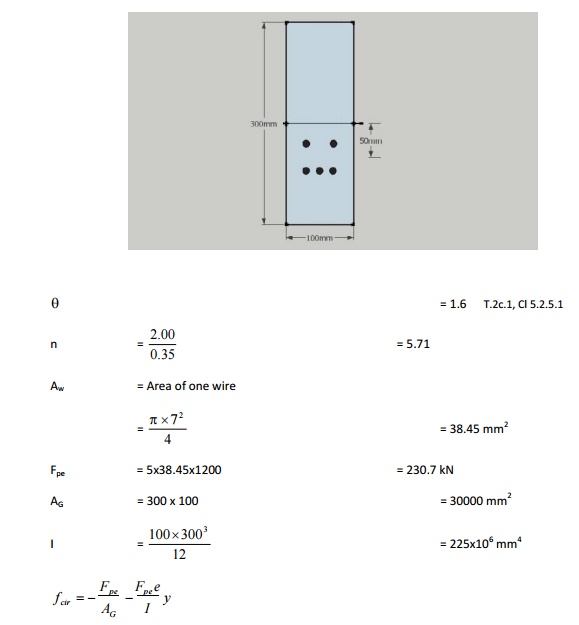 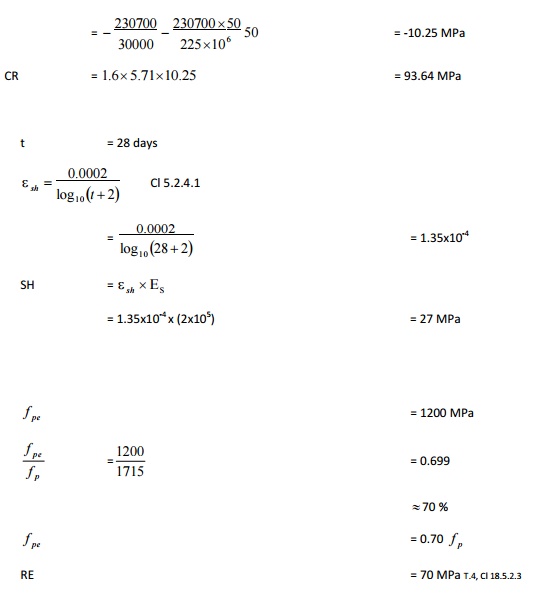 To calculate frictional losses - tensioned from one end 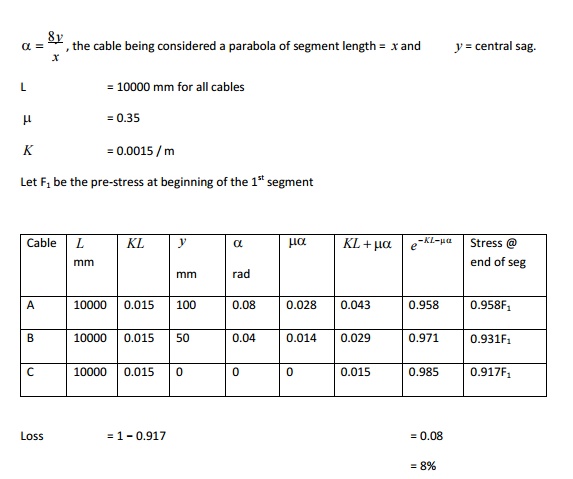 To calculate frictional losses - tensioned from both ends

A pre-stressed concrete beam is continuous over two spans and its curved tendon is to be tensioned from both ends. Compute the percentage of loss of pre-stress due to friction from one end to the center of the beam (A-E). The coefficient of friction between the cable and the duct is 0.40 and the average wobble or length effect is represented by k = 0.0026/m. The cable is straight between A-B and C-D. The change in angle between BC is 0.167 radians and that between DE is 0.100 radians. 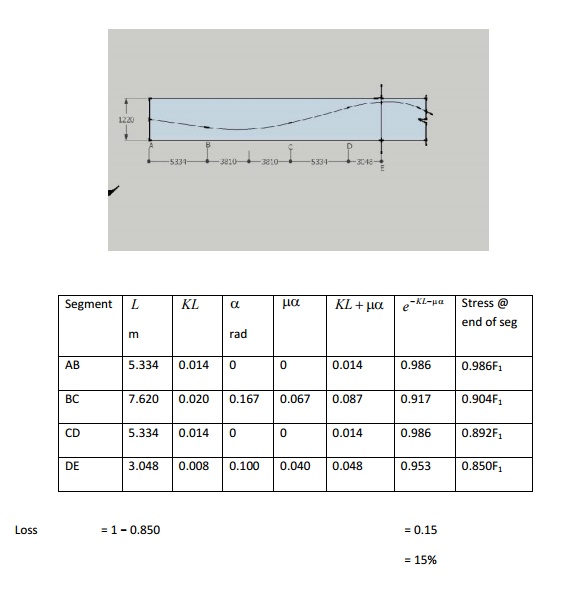