In a situation, where a metal M is placed in a solution containing its own ions Mn+, an electrode potential is established across the two electrodes.

In a situation, where a metal M is placed in a solution containing its own ions Mn+, an electrode potential is established across the two electrodes, whose actual value is provided by the Nernst equation as shown below :

From Eq. (b) the relationship to a cationic electrode, i.e., sensitive only to a cation concentration, may be expressed as :

to an anionic electrode :

or to a redox electrode :

a = Thermodynamic activity of the ion to which the electrode is sensitive,

n = Number of electrons involved in the electrode reaction.

Direct Potentiometry : The procedure adopted of employing a single measurement of electrode potential to determine the concentration of an ionic species in a solution is usually termed as direct potentiometry.

(a) From the Nernst Eq. (b) : Considering n = 1, temperature 25°C, RT/nF being a constant, and introducing the factor for the conversion of natural logarithms to logarithms to base 10, the term RT/nF shows a value of 0.0591 V. Therefore, for an ion M+ (monovalent) a ten-time change in the electrode potential E by approximately 60 millivolts (mV) ; whereas for an ion M2+ (bivalent) a change in identical magnitude of activity shall bring forth alternation of E by about 30 mV. Hence, it is evident that to attain a desired accuracy and precision to the extent of 1% in the estimated value for the direct concentration using the technique of direct potentiometry, for M+ ion—the E should be measurable correctly within 0.26 mV ; and for M2+ ion-within 0.1 mV.

Remedial Measures : There are two ways to eliminate the above anomaly, namely :

(ii) by using one solution which contains a high concentration of KCl or NH4NO3 i.e., such electro-lytes that offer almost identical values for ionic conductivities for both cation as well as anion.

Keeping in view the above serious anomalies commonly encountered with direct potentiometry, such as : an element of uncertainty triggered by liquid junction potential (Ej) and high degree of sensitivity required to measure electrode potential (E), it promptly gave birth to the phenomenon of potentiometric titrations,

which subsequently received a high level of sophistication and ultimately turned into a versatile analytical method. As the name suggests, it is indeed a titrimetric method whereby a series of potentiometric measurements are recorded so as to locate the end-point as correctly as possible. In this procedure, it is particularly of more interest to know the exact changes in the observed electrode potential after each addition of the titrant, rather than a precise and accurate electrode potential often brought about by a given solution. Thus, in a way the impact due to liquid-junction-potential (Ej) has been eliminated completely. It is pertinent to mention here that in a potentiometric titration procedure the apparent change in cell e.m.f. takes place not only most rapidly but also most distinctly in the vicinity of the end-point.

The potentiometric titrations invariably cover a broad-spectrum of chemical reactions that may be classified as follows :

The general principles which govern the above different types of reactions will be discussed briefly in the sections that follow :

The accuracy and precision with which the end-point can be determined potentiometrically solely depends upon the quantum of change in the observed e.m.f. in the vicinity of the equivalence point, which in turn entirely depends upon the strength and the concentration of acid and base employed.

Merits of the Method : It is found to be useful to titrate a mixture of acids having a significant difference in their strengths, for instance : HCl and CH3COOH (alcoholic). In this case, the first-break in the titration curve signifies that the stronger of the two acids i.e., HCl, gets neutralized ; whereas, the second-break represents the entire completion (i.e., HCl + CH3COOH).

In order to get fruitful and reproducible results it is quite necessary that the strengths between either the two acids or bases in question must vary by at least 105 to 1.

Demerits of the Method : The neutralization reactions often found to be giving unsatisfactory results in the following two instances. They are :

(a) when both the acid and the base are appreciably weak, and

In this particular case the ratio of the concentrations of the oxidized and reduced forms of ionic species establishes the determining factor. Considering the following reaction,

The electrode potential E is given by the following expression :

where,  E– = Standard potential of the system.

In other words, the potential of the immersed indicator electrode is solely controlled and monitored by the ratio of the ionic concentrations in Eq. (g). Furthermore, in the course of either reduction of an oxidizing agent or vice-versa i.e. the said ratio, and hence the observed potential, undergoes an instant rapid change in the proximity of the end-point of the redox reaction.

Example : A typical example is that of titrations of Fe2+ with potassium permanganate or potassium dichromate or cerium (IV) sulphate.

The oxidizing agent is usually taken in the burette.

In this the determining factor mainly rests on the solubility product of the resulting nearly insoluble material generated in the course of a precipitation reaction and its ionic concentration at the equivalence point. It is, however, pertinent to mention here that the indicator electrode must readily come into equilib-rium with one of the ions.

Indicator Electrodes :      Silver wire or Platinum wire or gauze plated with silver and sealed into a glass-tube.

(It should readily come into equilibrium with one of the ions of the precipitate).

Complexation invariably occurs by the interaction of a sparingly soluble precipitate with an excess amount of the reagent, for instance : the classical example of titration between KCN and AgNO3 as expressed by the following reactions :

In Eq. (h) the precipitate of AgCN is produced at first instance ; consequently, the precipitate of AgCN initially produced gets dissolved by further addition of KCN to afford the complex ion [Ag(CN)2]– Eq. (i) and only a negligible quantum of Ag+ ions remain in the solution. Thus, the entire process from ab initio to the final stage of titration may be divided into three distinct portions, namely :

Salt-Bridge : A saturated solution of KNO3 or K2SO4 isolated from the reference electrode.

The potentiometric technique has proved to be of great significance and utility for determining end-points of titrations in a non-aqueous media. The mV scale rather than the pH scale of the potentiometer must be used for obvious reasons, namely :

(i) pH scale based upon buffers has no logical significance in a non-aqueous media, and

(ii) the potentials in non-aqueous media may exceed the pH scale.

The resulting titration curves are more or less emperical and afford a reasonably dependable and reproducible means of end-point detection.

Salt-Bridge: A saturated solution of KCl.

In fact, there are several acceptable means to graph the potentiometric titration data generated from an actual titration in order to locate the exact (or nearest) end-point. These may be illustrated exclusively by employing the titration data provided in Table 16.1, between 25 ml of 0.01 M NaF and 0.01 M La (NO3)3. 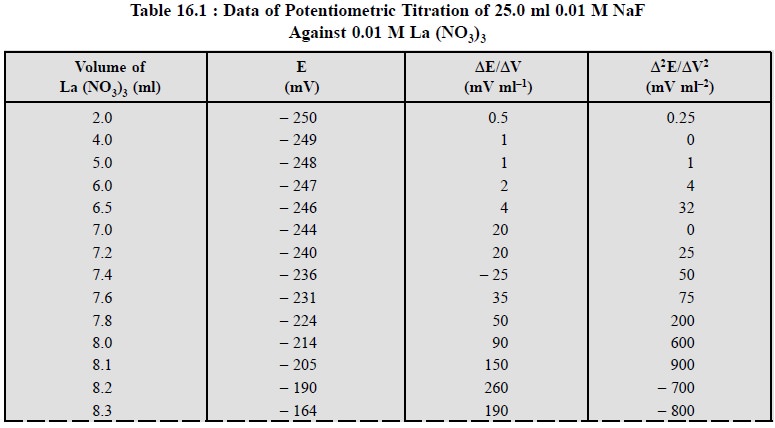 The simplest and the most commonly used method is to plot the cell voltage E, millivolts (mV), versus the volume (ml) of titrant added. Ultimately, the end-point is determined from the point of maximum slope of the curve i.e., the point of inflexion, as depicted in Figure 16.1 (a). However, the degree of accuracy and precision with which this point of inflexion can be located from the plotted graph largely depends on the individual number of data points observed in the close proximities of the end-point.

Figure 16.1 (a) gives rise to a sigmoid-curve (or S-shaped curve) obtained either by using an appropriate equipment (automatic titrators) that plots the graph automatically* as the titration proceeds, or manually by plotting the raw experimental data. The central portion of the sigmoid curve, in fact is the critical zone where the point of inflexion resides and this may be located by adopting any one of the follow-ing three procedures, namely : 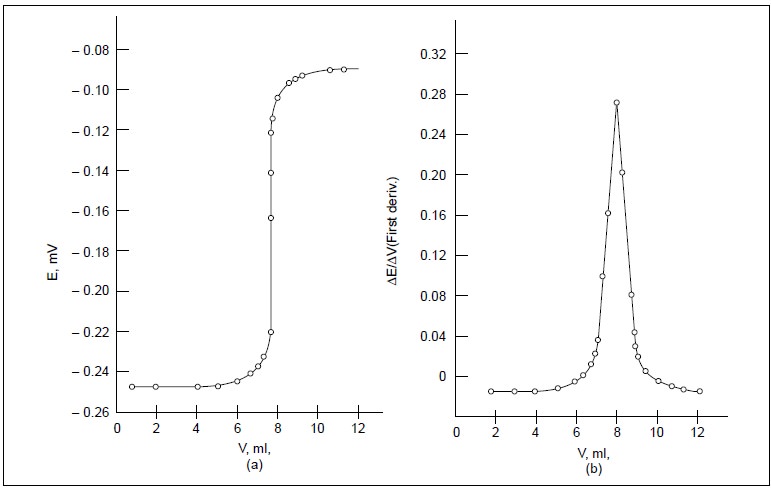 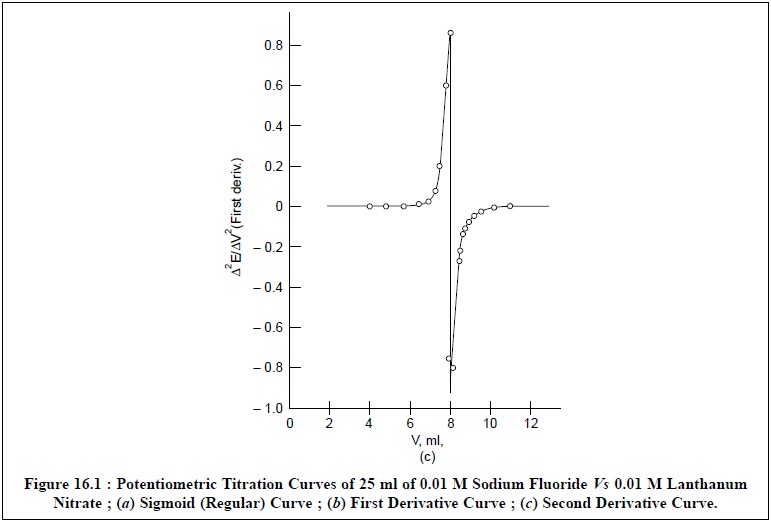 Figure 16.1 (b) is obtained by plotting ∆E/∆V against V which is termed as the first derivative curve. It gives a maximum at the point of inflexion of the titration curve i.e., at the end-point.