The major types of cell and tissue culture are: organ culture, embryo culture, tissue culture (production of callus and subsequent regeneration of organs or plantlets from excised pieces of tissue) and suspension culture (single cells or cell clumps in liquid media).

Types of cell and tissue culture

The major types of cell and tissue culture are: organ culture, embryo culture, tissue culture (production of callus and subsequent regeneration of organs or plantlets from excised pieces of tissue) and suspension culture (single cells or cell clumps in liquid media).

Plant cell and tissue cultures must be initiated and maintained in a sterile environment. Growth media include a carbon source (sucrose), macro and micronutrients, auxin and cytokinin, vitamins, water and, for solid media, a solidifying agent like agar.

Suspension cultures are started by breaking callus into liquid medium in conical flasks, which are agitated in an orbital incubator. Cells show logarithmic growth initially, then cell division ceases and growth rate declines. Subculturing to new medium is then required. Suspension cultures maintained for long periods may alter in properties due to mutation and altered gene expression.

Differentiation to form roots, shoots and plantlets can be induced by selecting an appropriate auxin:cytokinin ratio for the medium. Suspension culture cells will also form embryoids (somatic embryos) in appropriate conditions.

The major applications of plant cell and tissue culture are micropropagation, the production of high value products by cell cultures and as part of the genetic manipulation of plants.

Types of cell and tissue culture

Plant cell and tissue culture has been undertaken in various forms since the 1930s, although the techniques derive from the much older techniques ofplantpropagation, such as taking cuttings, which have been carried out by

horticulturists for centuries. The techniques are based on the fact that plants show plasticity of development, the ability to change developmental path if suitably triggered. Thus, a stem section can regenerate roots and leaves to achieve a complete, functional plant and single cells can be caused to form an entire new embryo. Plant tissue culture requires sterile conditions as tissue growth is slow and material in culture vulnerable to fungal and bacterial infection. The major types of sterile plant culture are:

• organ culture in which an organ (flower bud, immature fruit) is grown isolated from the parent plant;

• embryo culture in which an isolated or immature embryo is grown;

• tissue culture in which cell material isolated from a parent plant is grown to form callus (an undifferentiated mass of cells) or to regenerate organs or into a whole plant;

• suspension cultures in which isolated cells or small clumps of cells are grown in a liquid medium.

Protoplasts, cells from which the cell wall has been removed by enzymic digestion, are frequently used in cell culture to separate single cells from cell clumps.

Cultures are prepared in a near-sterile environment, usually a laminar flow cabinet, in which a draught of sterile air blows constantly across the workingsurface, using equipment and media sterilized by heat or in an autoclave.

A wide range of solid and liquid media have been developed for different applications. The media have to contain certain key components (Table 1). Prior to use they are autoclaved and handled under sterile conditions using sterile vessels or petri dishes. 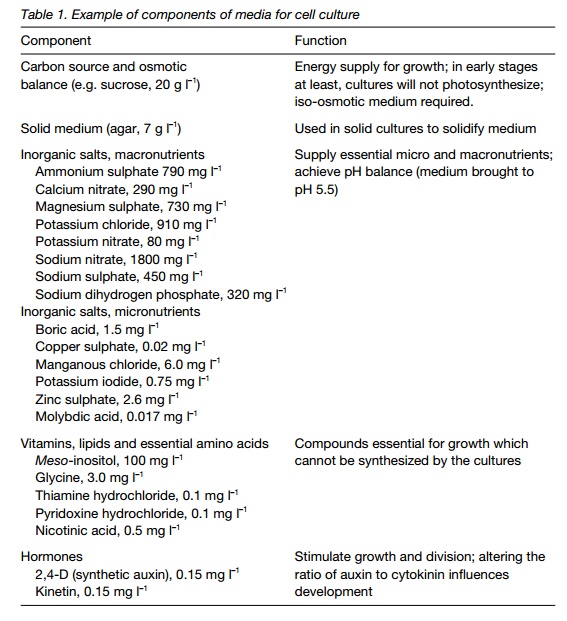 In order to initiate a solid cell or tissue culture, a sterile fragment (explant) of plant material must be obtained and placed onto growth medium. Initially, an undifferentiated mass of cells termed a callus will be formed. The following list summarizes the stages involved:

(i) select a healthy plant and remove a segment of tissue in a laminar flow hood;

(iii) excise a segment of tissue using sterile instruments and resterilize the tissue;

(iv) place the segment onto solid medium containing hormones and nutrients to induce cell proliferation in a petri dish;

Frequently, a range of auxin:cytokinin ratios is tested to optimize growth and development. Several transfers to fresh medium may be required if the formation of plantlets is desired. The whole process may take 8–12 weeks or more to complete.

Suspension cultures are initiated by breaking cells free from a callus by gentle agitation. They consist of single cells or cell clumps suspended in aerated liquid medium. The simplest suspension culture system is a conical flask gently

shaken on the platform of an orbital incubator. The swirling motion keeps the cells in suspension and oxygenates the medium. Cells in suspension culture show logarithmic growth, with rapid increase in fresh weight, dry weight and

DNA content (indicating cell division) over the first few days. This is followed by a decline in cell division and subsequently a decrease in growth rate (Fig. 1). If the cells are not given fresh medium, they will then die; however, if a small aliquot is removed and subcultured into fresh medium the entire process can be repeated indefinitely. When the aim of the process is to harvest secondary products such as the antimicrobial dye shikonin, optimum production often occurs late in the growth cycle, when cell death is beginning to occur. The media for maintaining cells in culture is optimized for each species and cell type and will include auxin and cytokinin to stimulate cell division. 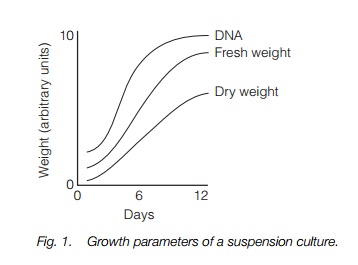 After prolonged culture, the cells may alter in their characteristics as a result of mutation or the activation of previously inactive genes. After repeated subculturing, for instance, genes for cytokinin biosynthesis may be activated and the cultures lose their requirement for cytokinin in the culture medium. This process is known as habituation.

Scaling up suspension cultures into large culture vessels is difficult as: (i) aseptic conditions must be maintained; (ii) constant aeration is required; (iii) cells are easily damaged by stirrers and changes in pressure; (iv) cells require constant agitation. These problems have been overcome in a number of designs; an example, based on using rising sterile air to agitate the cells, is shown in Fig. 2.

Many experiments in cell culture are carried out with the aim of regenerating an entire plant. This is particularly important for genetic modification, where a novel gene may be inserted into a cell suspension, a protoplast or callus, and whole plants need to be produced.

Cells divide randomly to form an undifferentiated mass, known as a callus. If the auxin:cytokinin ratio of the medium is varied, the callus can be induced to differentiate to form roots and buds . By subculturing, intact plants can be regenerated by this method. Callus cultures may also formembryoids (somatic embryos, i.e. embryos formed in culture, as opposed to zygoticembryos formed sexually in a plant) on appropriate media. Cultures able to generate embryos are termed embryogenic.

Micropropagation is the use of plant tissue culture to regenerate large numbers of plants. The technique results in genetically identical plants and is therefore clonal propagation. It is commonly used to produce disease-free plants, and commercially for many species including trees, potato and orchids, and as part of the procedure to genetically manipulate crops. Somatic embryos can be encapsulated in hydrated gel to produce a ‘synthetic seed’ or propagule. 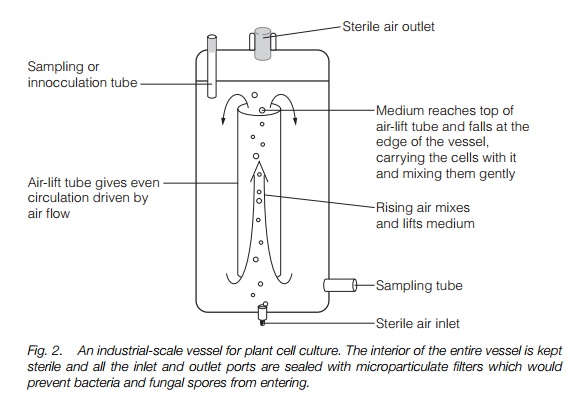 Many plant secondary products  are difficult to produce by organic synthesis. Considerable effort has gone into using plant suspension cultures to make them. Details of important plant secondary products are presented; they are frequently produced by highly specialized cells. Consequently, high yields in cell culture can only be obtained if the cultures express the genes required. Frequently, this only occurs when the cells are at the end of the culture cycle. An example of a compound successfully produced in culture is the antimicrobial dye shikonin, produced by cultures of Coptisjaponica.

Plant genetic manipulation is a widespread application of plant cell and tissue culture techniques today and without it, the commercialization of genetically modified crops would not be possible.