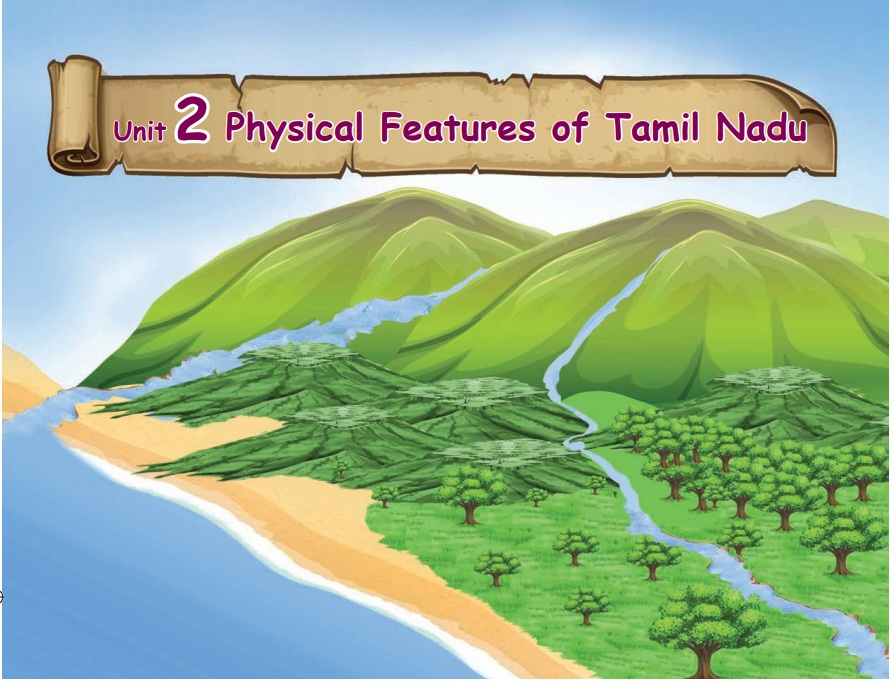 •describe the features of mountains, plateaus, plains and coast.

•explain the types of forests found in Tamil Nadu.

Tamil Nadu is located in the South of India. It is the eleventh largest state in India. 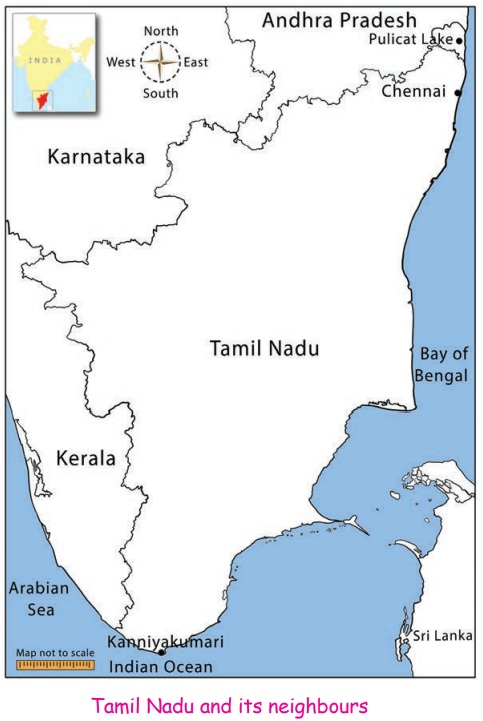 Tamil Nadu and its neighbours

It shares boundaries with

• Andhra Pradesh on the North

• Karnataka on the North west

• Indian Ocean on the South

• Kerala on the West

• Bay of Bengal on the East

Tamil Nadu extends upto Kanniyakumari which forms the southern most tip of India. It is the meeting point of Arabian Sea, Indian Ocean and Bay of Bengal.

The Pulicat lake is situated at the northern end of Tamil Nadu.

1. On the political map of India shade any two neighbouring States of Tamil Nadu.

2. Mark the Indian Ocean, the Arabian Sea and the Bay of Bengal on the map. 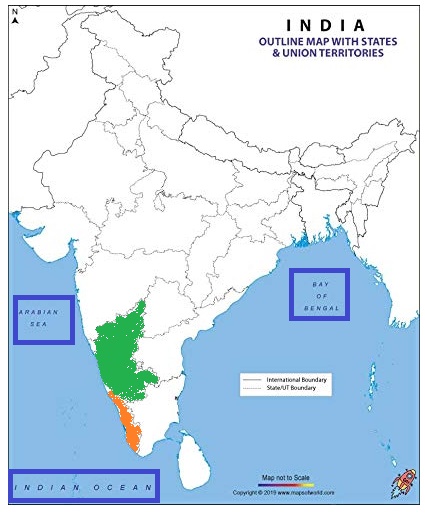 The landscape of Tamil Nadu can be divided into four categories namely:

Tamil Nadu is the only state in India which has both the Western ghats and Eastern ghats. They meet at the Nilgiri hills in Tamil Nadu. Doddabetta is the highest peak in Nilgiri hills. Tamil Nadu has various hill stations like Ooty, Kodaikkanal, Kolli hills, Kothagiri and Yercaud. 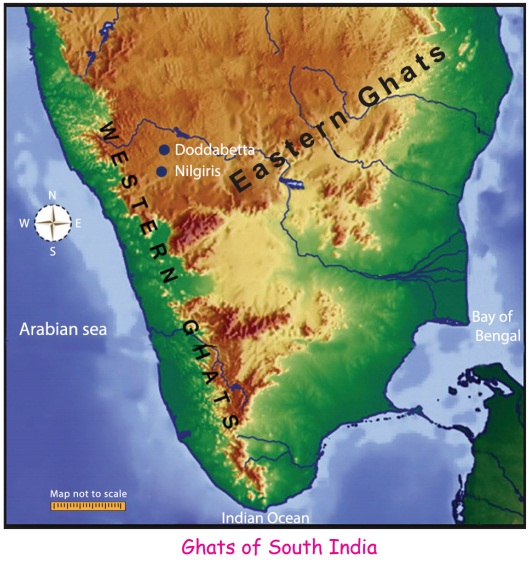 The Eastern ghats do not get enough rainfall unlike the Western ghats which receives lot of rainfall. The plantations grown in these ghats include tea, coffee and spices.

Tamil Nadu has rich flora and fauna. Mudumalai wildlife sanctuary, Indira Gandhi wildlife sanctuary and National park in Anaimalai are in the Western ghats of the state. There are a variety of plant species found in them. The Kurunji shrub is the most special of them all. Kurunji flowers blossom once in 12 years.

There are three plateaus in Tamil Nadu namely Bharamahal plateau, Coimbatore plateau and Madurai plateau. There are many small hills between these plateaus. Chennimalai is one among those hills in Erode. 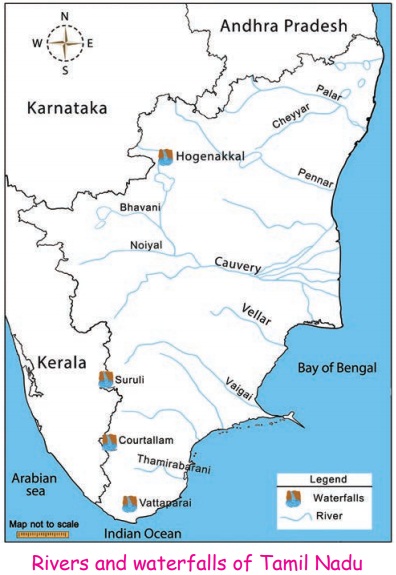 Plains in Tamil Nadu can be divided into river plains and coastal plains.

Rivers Palar, Cheyyar, Pennar and Vellar form the Northern plains. The middle river plain is formed by Cauvery and its tributaries. River Vaigai and Thamirabarani form the Southern plains.

River Cheyyar is a tributary of River Palar. It is a seasonal river that flows through the district of Tiruvannamalai.

Rivers and waterfalls of Tamil Nadu

Coastal plains of Tamil Nadu are also called Cholamandalam plains which extend from Chennai to Kanniyakumari.

Tamil Nadu has the third longest coastline in India. The coastal region extends from Chennai to Kanniyakumari. Pamban island forms a part of Ramanathapuram. It separates Gulf of Mannar and Palk strait. 13 districts share the coastline. 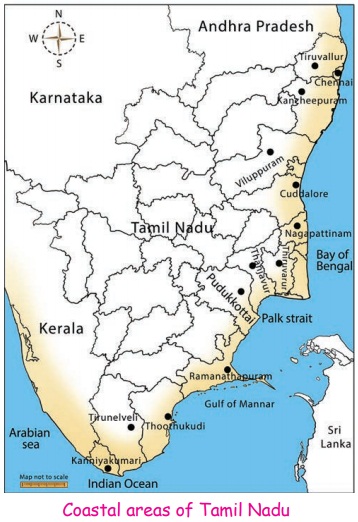 The notable beaches of Tamil Nadu are:

a) Marina Beach, the second longest urban beach in the world.

b) Rameswaram beach is famous for its beautiful view.

c) Kanniyakumari beach is famous for its beautiful views of sunrise and sunset over the water.

DO YOU KNOW? Pamban bridge in Rameswaram is India‛s first sea bridge opened in the year 1914. 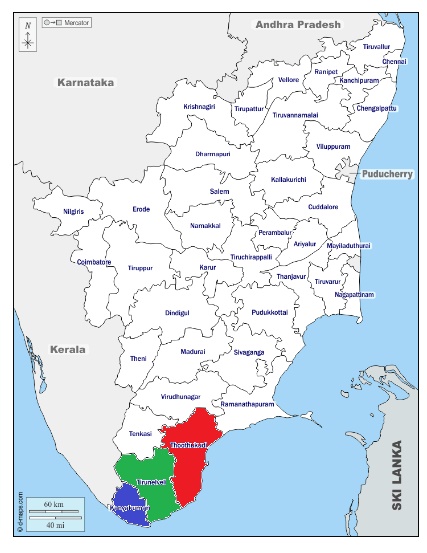 Do You Know? Droogs are steep rocks. Rock fort is a famous droog in Tiruchirapalli (Tamil Nadu).

Waterfalls is an area where the river water flows down from a mountain. Tamil Nadu has several waterfalls. Some of them are:

a) Hogenakkal waterfalls is located in Dharmapuri on the River Cauvery. It is known for bathing areas, boat rides and attracts many tourists all round the year.

b) Courtallam waterfalls is located in Tenkasi. It is in the Western ghats on the river Chittar. There are a total of nine falls of which Peraruvi, Aintharuvi and Puli Aruvi are the most prominent.

c) Suruli waterfalls is located in Theni. Here the water falls from a series of rock steps.

d) Vattaparai waterfalls is located in Kanniyakumari. The falls is surrounded by forest on all sides. People are allowed to take a natural bath here.

2. Where is Courtallam waterfalls located?

Answer:Courtallam waterfalls is located in Tenkasi.

1. During which months does the State receive rain fall from South West monsoon?

2. Describe the weather of Tamil Naduin a sentence.

Thiruthani recorded the all-time highest temperature of 48.6°C in May 2003.

There are many types of forests across Tamil Nadu. Most of these forests are found in the areas near the ghats. These forests have so many types of trees. The topmost branches of the trees form a continuous chain such that little or no sunlight hits the ground, this is called canopy. The forests are divided based on the canopy cover: 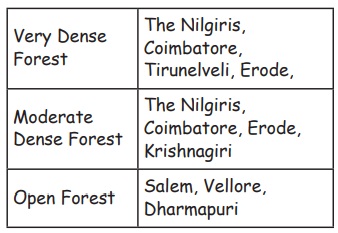 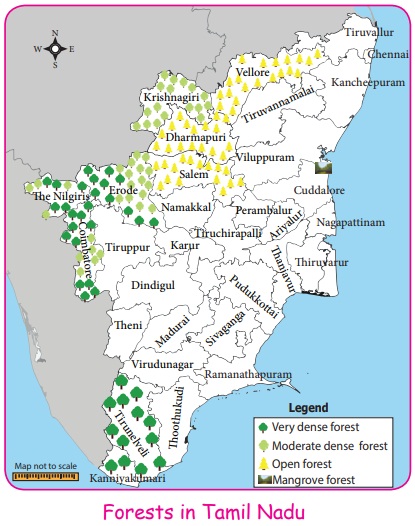 The forests can also be grouped as:

The trees in these forests have leaves that are always green. In Tamil Nadu we find evergreen forests in the Western ghats of Tirunelveli, Kanniyakumari, The Nilgiris and Coimbatore.

The trees in these forests shed their leaves during the dry season. 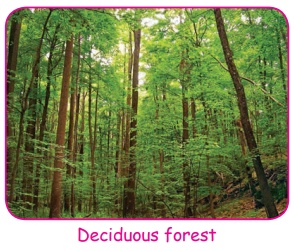 These forests are usually found near the evergreen forests. They generally grow in the lower regions of the hills.

The word swamp means areas that are low where water gets collected easily. These forests are usually found near the beaches and river beds. 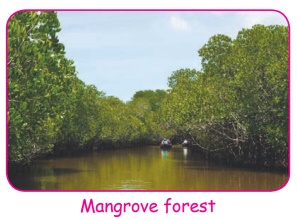 The Pichavaram mangrove forest is located near Chidambaram in Tamil Nadu.

1. Flora and fauna - The plants and the animals of an environment.

4. Weather - The daily state of the atmosphere, or air, in any given place.

5. Climate - The average of weather conditions in an area over a long period.

•Tamil Nadu is located in the South of India.

• Landscapes can be divided into four categories namely mountains, plateaus, plains and coasts.

• Plains are found along the rivers and the coasts.

• The coastline of Tamil Nadu is shared by 13 districts.

• Tamil Nadu has a tropical climate.

•Forests can be grouped as evergreen forests, deciduous forests and swamp forests.