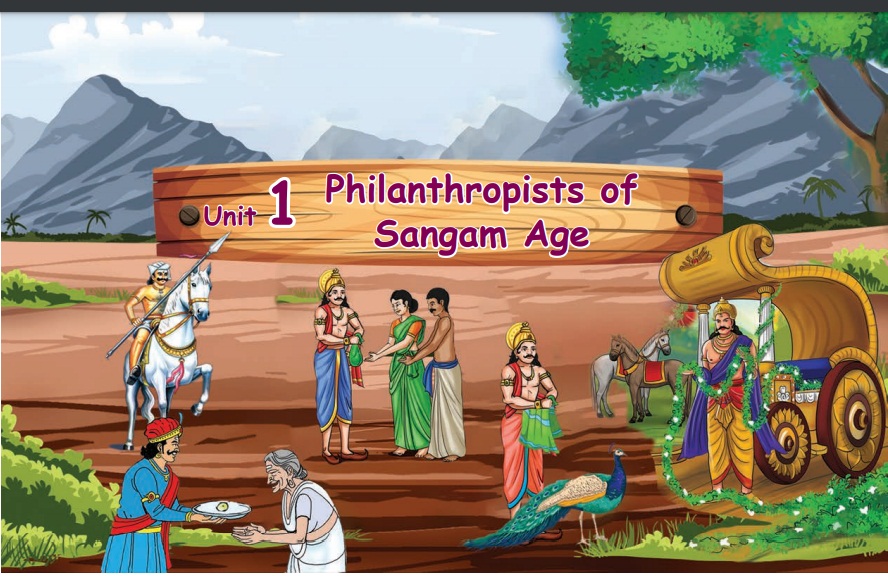 • name the regions ruled by the philanthropists.

•understand the significance of kindness.

• explain how the philanthropists ruled their region.

Geetha and her Grandpa are on a trip duringsummer holidays. They are on their way to Kodaikanal the hill station in Tamil Nadu.This is the first time that Geetha is travelling up a steep hill ina bus.

Grandpa, how did people come to these hills before buses and cars were used?

They would have used horses and donkeys to climb up the hill.

Who ruled these regions?

In the Sangam Age, many philanthropists ruled the hilly regions. But, seven of them were very famous.

Why only seven were famous? Who were they?

DO YOU KNOW? Sangam literature, consisting of several classical poetry is the main sources of the Sangam Age.

Those seven philanthropists were Pegan, Pari, Nedumudi kari, Aay, Adhiyaman, Nalli and Valvil Ori. They ruled different hilly regions at different periods during the Sangam Age. They were all powerful, kind and cared for nature and the people.

Is that! why there are more trees in the hills than in Chennai?

Hills usually have lot of trees. It is important forpeople to take care of them. Shall I tell you a fewstories about how those philanthropists and thepeople protected nature and how in turn natureprotected them?

I would love that!

2. During which age did the seven famous philanthropists rule the hilly regions?

Are you ready for the first story?

Okay. This story is about Pegan. Pegan ruled Palanihills (Dindigul district) – the very same hill range that we are visiting today. Isn't it cold here?

Yes, grandpa. That‛s why Amma has packed sweaters for us.

Correct. One day, while Pegan was on his walk, he saw a peacock shivering. He assumed that the peacock was shivering due to cold and he covered the peacock with shawl.

Can a peacock use a shawl?

May be not.The point is that Pegan treated the peacock just like his own child. How many people now a days show such kindness towards animals?

Grandpa, one day I saw a boy throwing stones at a dog. I stopped him. May be, if he knew about Pegan, he would find a way to love animals.

True. It‛s not just kindness towards trees and animals. It is also about valuing people. We should treat all living things equally.

1. Which hilly region did Pegan rule?

2. What did Pegan see when he was taking a walk?

Answer: A peacock shivering with cold.

3. What did Pegan use to cover the shivering peacock?

Answer: He used his shawl to cover the shivering peacock. 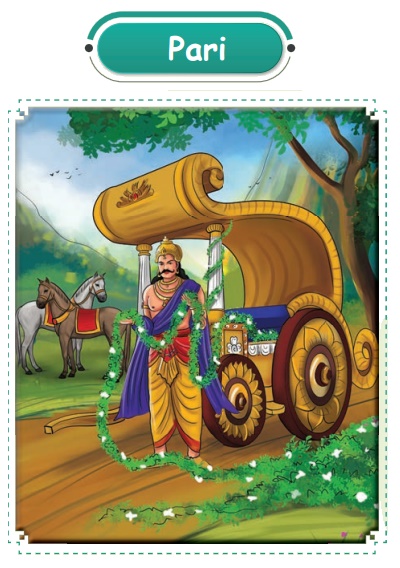 Okay,the next storyisnearly 2,000 years old. A wise and kind philanthropist called Pari ruled ParambuNadu.This was located in Parambu malai,a hill range that starts in Sivaganga district in Tamil Nadu and extends all the way to Palakkad in Kerala.

The Moovendhars - the Cheras, Cholas and Pandyas - wanted to make Parambu Nadu a part of their kingdom. They were not able to win the battles against Pari and his army individually. So, they attacked Parambu Nadu together.

In the thick forests inside the hills, they were not able to defeat Pari‛s army. Instead, they made sure that Parambu Nadu could not get water or food from below the hill. They thought that Pari would surrender, after he ran out of food and water.

No, Pari did not surrender. Few months passed, the Moovendhars later realised that the forests in Parambu malai were so rich that they provided people with a lot of jackfruit, edible bamboo and other wild nuts. The hill also had a lot of streams that provided them with fresh, clean water.

So they didn‛t need food or water from any other place?

Yes. Their forests took care of them, just as Pari,the people in his region also took care of nature.There is even a famous story that tells his generosity. One day Pari was passing a young jasmine climber. He saw that there was no tree to help the climber to grow. He offered his golden chariot to give support for the climber.

This is so interesting. Do you know that we planted a few trees in our school? I will make sure that they grow well, just like Pari did.

Would you like to hear more stories about some of the other philanthropists?

1. Which was the region ruled by Pari ?

2. What were stopped from the lower regions to Parambu Nadu?

Answer: Water and food were stopped from the lower regions.

3. What did Pari give to support jasmineclimber? 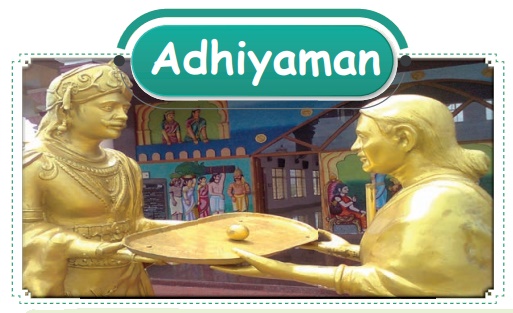 There was another philanthropist called Adhiyaman. He also ruled a hilly region Thagadur in Dharmapuri district. One day he was presented with a very rare type of gooseberry. He was told that anyone who ate that rare fruit, would be immortal. Do you know what did he do?

He offered that fruit to an old Tamil poetess Avvaiyar.

The same Avvaiyar I read about her in my Tamil textbook?

Yes,Geetha.Avvaiyar was shocked and asked Adhiyaman why he was offering her the gooseberry. She said that he should eat this fruit as he was the chieftain. Adhiyaman told her that there would be many chieftains after him, but there would not be many poets, to teach people how to live life better, like her.

Can you imagine a powerful chieftain offering such a valuable gift to an old poetess? This shows how people valued each other in the Sangam Age. Don‛t you agree?

Yes, grandpa. We should always value people around us.

1. What did Adhiyaman receive as a present?

3. Why did Adhiyaman give the gooseberry to Avvaiyar?

Answer: There would not be many poets, to teach people how to live life better, like her. So Adhiyaman gave the gooseberry to Avvaiyar. 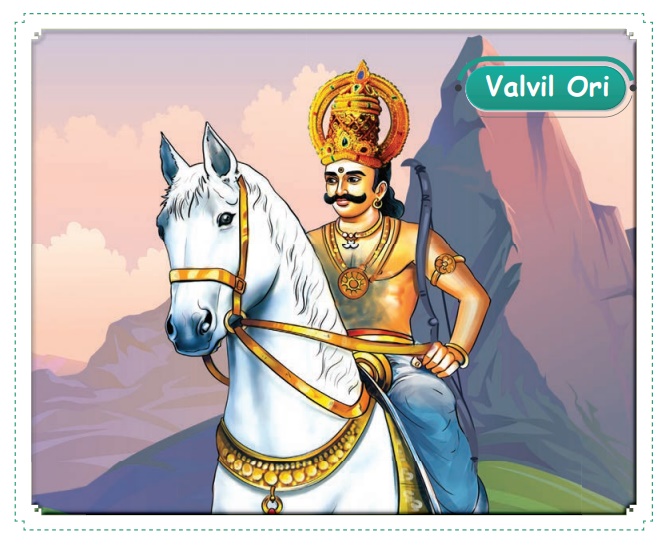 Let me tell you a story of another chieftain Valvil Ori who ruled a hilly region in Kolli hills (Namakkal district).

Does the 'Vil' in his name mean bow?

How smart you are! Yes, it does. 'Val' means powerful and 'Vil'means bow. He got his name as he was an expert archer.

Amazing! what did he do for the people?

Ori was not only known for his skill in archery, but also hailed as a kind ruler. He used to reward bards, musicians, dancers and other artisans for their skills.

Grandpa, I like Valvil Ori. What about the other three philanthropists? 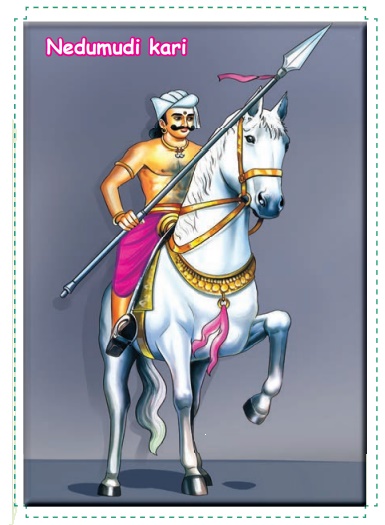 Aay also ruled a hilly region in the Pothigai hills, South of Madurai.

They were all known for their kindness. That‛s why even after so many years, they are still fondly remembered by us.

Thank you for the interesting stories. I will share these with all my friends.

2. What is the meaning of Val and Vil?

List the name of the seven Philanthropists and their regions.

Sangam Age - A period in the history of ancient Tamil Nadu.

Philanthropist- A person who seeks to promote the welfare of others.

Artisan - A worker in a skilled profession.

● There were many philanthropists in Sangam Age. Seven of them were famous.

● The Moovendhars were the Cheras, Cholas and Pandyas.

● Philanthropists were known for the kindness towards the people and nature.