Chapter: Modern Pharmacology with Clinical Applications: Drugs for the Control of Supragingival Plaque

Pharmacokinetics of the Oral Cavity 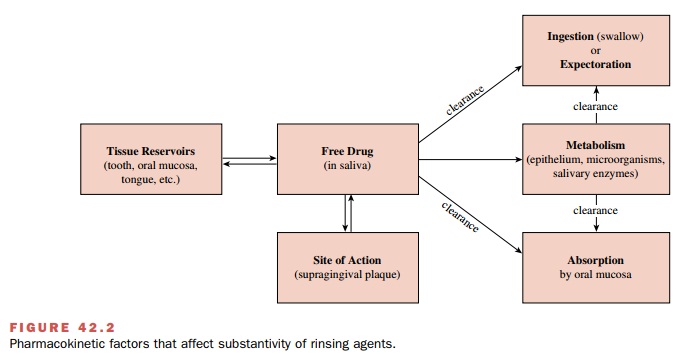 The therapeutic outcome of topically applied agents used to control oral infections will depend on the char-acteristics of drugs that take advantage of the unique physiological and anatomical circumstances in the oral cavity.

PHARMACOKINETICS OF THE ORAL CAVITY

The therapeutic outcome of topically applied agents used to control oral infections will depend on the char-acteristics of drugs that take advantage of the unique physiological and anatomical circumstances in the oral cavity. This section is a broad overview of important oral pharmacokinetic principles.

The vascularity of the oral cavity, combined with a thin epithelial lining in some areas, allows for the absorption of drugs at a rapid rate. Un-ionized drugs, such as nitro-glycerin, take advantage of these tissue characteristics and diffuse rapidly across the oral mucosa into the bloodstream. Unlike most drugs, for which the principal objective is to introduce the agent into the bloodstream rapidly, the goal of oral topical agents is to be retained in the oral cavity for as long as possible. Absorption can lead to toxic effects elsewhere in the body and a signif-icant reduction of the free drug in the oral cavity. In most instances, the drugs used to restrain plaque levels are highly ionized and therefore are generally unable to penetrate the oral mucosa.

Once an agent is topically applied in the oral cavity, the free drug can act at the primary site (i.e., bacteria in the plaque), or it can be partitioned to compartments where the drug binds nonspecifically. These drug reservoirs in-clude the enamel, dentin, and/or cementum of the tooth, the oral mucosa, the organic and inorganic com-ponents of plaque, and salivary proteins.

The fraction of the administered dose that is non-specifically bound to oral reservoirs is highly dependent on the drug’s concentration and chemical nature and the amount of time it remains at the site. For example, a 1-minute rinse with 0.2% chlorhexidine will result in approximately 30% of the total amount dispensed be-ing retained, whereas a 3-minute rinse with 0.1% sodium fluoride will result in less than 1% of the ad-ministered dose being found in the oral cavity after an hour. The ability of oral agents to bind to oral reservoirs nonspecifically and reversibly is an important quality for sustained release of drugs.

In the oral cavity, drug metabolism occurs in mucosal epithelial cells, microorganisms, and enzymes in the saliva; metabolism also takes place in renal and hepatic tissue once the drug is swallowed. Although biotrans-formation of agents in the oral cavity is potentially an important aspect of reducing effective drug concentra-

tions, quantitatively it accounts for only a small per-centage of drug inactivation.

Salivary flow is extremely important in the removal of many agents from the oral cavity. Human saliva has a diurnal flow that varies between 500 and 1,500 mL in the daytime to less than 10 mL of secretion at night. The rate of clearance of a drug from the oral cavity there-fore is profoundly important in determining the amount of time a drug is in contact with the tooth surface.

The period that a drug is in contact with a particular sub-strate in the oral cavity is substantivity. Drugs that have a prolonged duration of contact are considered to have high substantivity. In the oral cavity, substantivity de-pends on two important pharmacokinetic features: the degree of reversible nonspecific binding to oral reser-voirs and the rate of clearance by salivary flow (Fig. 42.2). 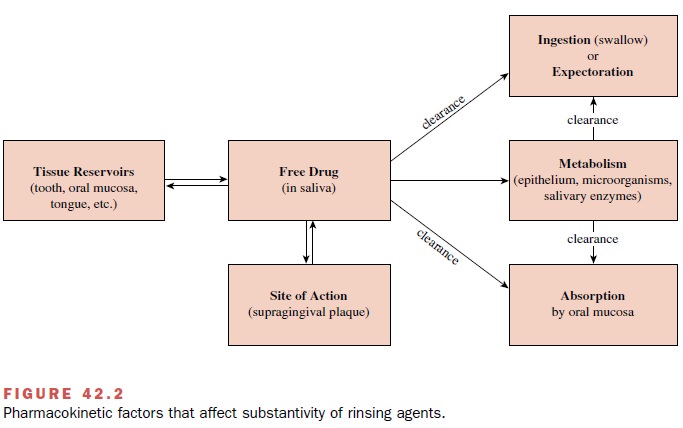 Oral reservoirs are an important source for the con-tinued release of drugs. The oral compartments that ac-cumulate a drug must reversibly bind large portions of the administered dose and release therapeutic concen-trations of free drug to the site of action over long peri-ods. Therefore, effective agents with high substantivity ideally would not bind irreversibly, nor would they bind with high affinity to oral reservoirs.

Salivary flow also will significantly affect the sub-stantivity of topically applied liquid agents. The clear-ance of an agent from the oral cavity is directly propor-tional to the rate of salivary flow. Hence, during periods of high salivary flow, a greater release of drug from oral reservoirs is necessary to maintain therapeutic concen-trations. Strategies that use natural or drug-induced pe-riods of low salivary flow can increase the substantivity of an oral agent.