In fruits that are derived from a single ovary, the fruit wall, termed the pericarp, is typically derived from the ovary wall.

In fruits that are derived from a single ovary, the fruit wall, termed the pericarp, is typically derived from the ovary wall. The pericarp displays a similar range of variation to the seed coat, depending particularly on whether it is dry or fleshy and dehiscent or indehiscent. It is typically divided into three layers the outer exocarp, central mesocarp and inner endocarp though in some fruits the three layers are not readily distinguished. At least one layer of the fruit wall often consists of thick-walled lignified cells (Fig. 6.4), though in some fleshy fruits (berries), such as those of Vitis vinifera (grape), the entire endocarp consists of thin-walled succulent cells. In other fleshy fruits (drupes), such as those 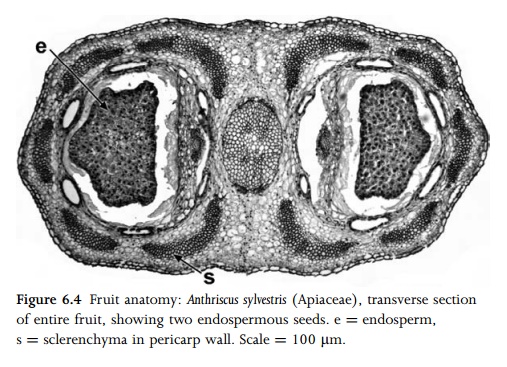 of Prunus persica (peach), the endocarp cells are thick-walled and only the mesocarp is fleshy, the exocarp being a narrow epidermal layer. In Olea europaea (olive) the fleshy mesocarp is interspersed with thick-walled sclereids.

Many indehiscent seeds and fruits produce sticky mucilage when they become wet, which provides an adhesive for animal-mediated dispersal, a phenomenon termed myxospermy or myxocarpy. For example, in the nutlet walls of Coleus and some other Lamiaceae the epidermal cells absorb water and then rupture, producing large amounts of slime interspersed with coiled, thread-like protuberances.