In a normal angiosperm reproductive system the embryo develops from the diploid fertilized egg cell (zygote).

In a normal angiosperm reproductive system the embryo develops from the diploid fertilized egg cell (zygote). Following fertil-ization, the zygote often undergoes a change in volume, either shrinkage or enlargement, before cell division commences. The initial cell division is usually transverse and sometimes asym-metric, to form a small apical and larger basal cell. The pattern of subsequent cell division varies among species, and has been classified into several types. Most embryos eventually differ-entiate into an undifferentiated globular mass of cells (the proembryo) attached to the embryo sac wall by a stalk (the sus-pensor) (Fig. 6.7). In Arabidopsis the apical cell gives rise to the proembryo, which ultimately forms the bulk of the embryo, and the basal cell produces the suspensor and the hypophysis, which is the precursor to the root cortex initials and the central region of the root cap. The proembryo can be massive (e.g. Degeneria), or small, as in Capsella, in which it consists of only eight cells. 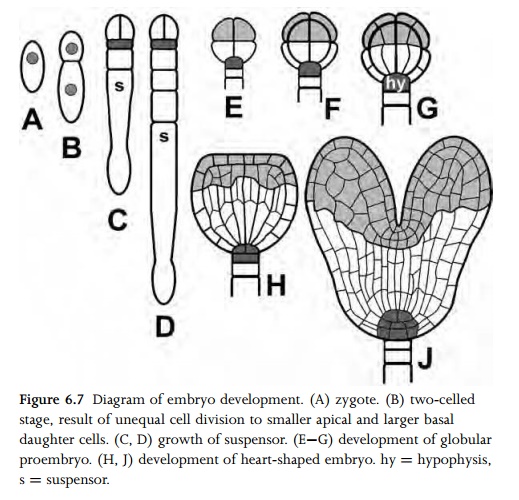 The suspensor exhibits great diversity in angiosperms; it can be uniseriate or multiseriate, and filamentous, spherical or irregular in shape. Cells of large suspensors, such as those of Phaseolus, are often endopolyploid. Suspensors of some species are secretory, and those of others (e.g. Sedum and Tropaeolum) produce haustoria that invade surrounding endosperm tissue.

The suspensor ultimately degenerates, and the globular proembryo undergoes a process of irregular meristematic activity that results in a shift from radial to bilateral symmetry. The proembryo eventually becomes organized into a structure with root and shoot apices at opposite ends of an embryonic axis (the hypocotyl). Embryos of most eudicots and magnoliids 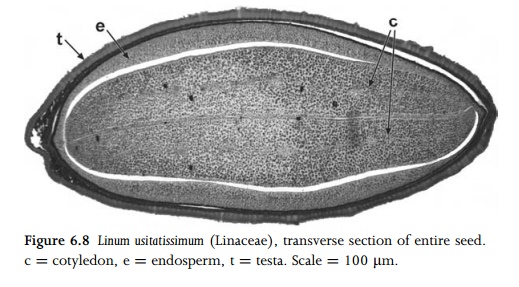 become bilobed or heart-shaped (Fig. 6.7) as two cotyledons differentiate (Fig. 6.8). Monocot embryos develop a single, often elongated cotyledon. The degree of differentiation of mature embryos varies considerably; for example, in orchids the embryo remains a simple undifferentiated mass of cells (Fig. 6.3). Some highly differentiated embryos possess, in addition to the hypo-cotyl and cotyledons, a short primordial root (radicle), often with a root cap, and a shoot bud or short shoot (epicotyl) developed beyond the cotyledons. 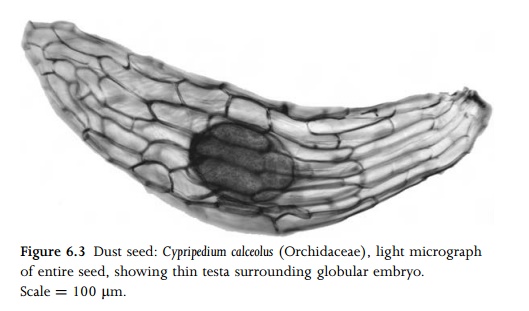