The placement of pattern on the fabric, in an economical manner, that is without wasting fabric is known as pattern layout.

The placement of pattern on the fabric, in an economical manner, that is without wasting fabric is known as pattern layout. All the patterns should be arranged prop-erly following grain of the fabric. Example the bodice centre front will be in straight (lengthwise direction) grain.

The main points to be considered while laying patterns are:

·           Press the fabric without any wrinkles before laying the patterns.

·           Place the larger patterns first. Place sim-ilar pattern together, with same length. Example placement of bodice front and bodices back next to each other, such that the side seams are close to each other.

·           Place the smaller patterns in gaps in between the larger pattern.

·           If pattern is to be cut in more num-ber, example two sleeve patterns, place them on fold. This concept is not pos-sible when the fabric has a one way design or when the patterns have dif-ferent front and back patterns.

·           Keep weight, pencil, pins ready in hand, to draw, or pin or place weights on patterns, so that it remain in cor-rect position.

Based upon the place-ment of the patterns, the layouts are classified as

Open layout is the simplest layout. The fab-ric is spread on the table and the patterns are laid from left to right one after the other. This is easy for beginners. No fold is made in this method. It can be used for all patterns. This is used especially for designs with dif-ferent left and right patterns.

The fabric is folded in the lengthwise direction. The selvedges of both sides are placed one on top of the other and folded in the middle. The fabric forms a fold at the centre. All folded patterns are placed along this fold. This fold is also used for different type of frocks, shirts and blouses.

The required width needed for the pat-terns is taken on the fabric and folded in the lengthwise direction. This is com-monly seen when many small patterns are found in garments. The fold should be parallel to the selvedge. This is used for many garments from simple baby’s panty to integrated men’s coats.

Crosswise centre fold is similar to length-wise centre fold. In this fold, the fabric is folded in crosswise direction. It is best suited, when the patterns are too narrow to be fitted in the lengthwise fold. This fold can also be used when special effects are needed like having a dress with hori-zontal strips using a material with length-wise stripes.

The off centre crosswise fold is a layout when the fabric is folded in the cross grain. The fold is perpendicular to the selvedge. This fold is used when a part of garment is cut in cross wise grain for ease or spe-cial effects. Example when collars or yokes are cut on fabrics with horizontal strips or vertical strips.

In combination fold the fabric is folded in lengthwise and crosswise grains together. This layout is used for sari petticoats and jablas (Figure 11.4) 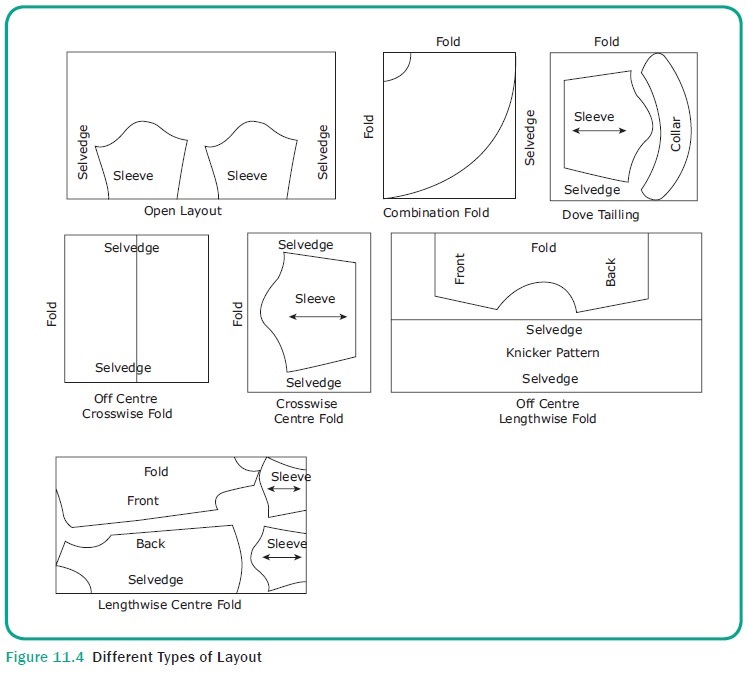