Design retrieval. A designer faced with the task of developing a new part can use a design retrieval system to determine if a similar part already exists. A simple change in an existing part would take much less time than designing a whole new part from scratch.

Automated process planning. The part code for a new part can be used to search for process plans for existing parts with identical or similar codes

Machine cell design. The part codes can be used to design machine cells capable of producing all members of a particular part family, using the composite part concept (Section 15.4.1).

To accomplish parts classification and coding requires examination and analysis of the design and/or manufacturing attributes of each part. The examination is sometimes done

by looking in tables to match the subject part against the features described and diagrammed in the tables. An alternative and more-productive approach involves interaction with a computerized classification and coding system, in which the user responds to questions asked by the computer. On the basis of the responses, the computer assigns the code number to the part. Whichever method is used, the classification results in a code number that uniquely identifies the part's attributes.

A number of classification and coding systems are described in the literature [13], [16], [31], and there are a number of commercially available coding packages. However, none of the systems has been universally adopted. One of the reasons for this is that a classification and coding system should be customized for it given company or industry. A system that is best for one company may not be best for another company.

systems  based  on part design attributes

systems based  on part manufacturing   attributes

systems based  on both  design  and  manufacturing   attributes

In terms of the meaning of the symbols in the code, there are three structures used in classification and coding schemes:

hierarchical structure, also known as a monocode, in which the interpretation of each successive symbol depends on the value of the preceding symbols

Chain-type structure, also known as a polycode, in which the interpretation of each symbol in the sequence is always the same; it does not depend on the value of preceding symbols

mixed-mode structure. which  is a hybrid  of the two previous  codes

To distinguish the hierarchical and chain-type structures, consider a two-digit code number for a part, such as 15 or 25. Suppose the first digit stands for the general shape of the part: 1 means the part is cylindrical (rotational), and 2 means the geometry is rectangular.

In a hierarchical structure, the interpretation of the second digit depends on the value of the first digit. If preceded by 1, the 5 might indicate a length to diameter ratio; and if preceded by 2, the 5 indicates an aspect ratio between the length and width dimensions of the part. In the chain-type structure, the symbol 5 would have the same meaning whether preceded by 1 or 2. For example, it might indicate the overall length of the part. The advantage of the hierarchical structure is that in general. more information can he included in a code of a given number of digits.

The number of digits in the code can range from 6 to 30. Coding schemes that contain only design data require fewer digits. perhaps 12 or fewer. Most modem classification and coding systems include both design and manufacturing data, and this usually requires 2030 digits. This might seem like too many digits fur a human reader to easily comprehend, but it must be remembered that most of the data processing of the codes is accomplished by computer. for which a large number of digits is of minor concern

Some of the important systems (with emphasis on those in the United States) include: the Opitz classification system, which is nonproprietary; the Brisch System (Brisch-Birn, Inc.); CODE (Manufacturing Data Systems. lnc.]: CUTPLAN (Metcut Associates); DCLASS (Brigham Young University): Multi-Class (OIR: Organization for Industrial Research);and Part Analog System (Lovelace. Lawrence & Co., Inc.). Reviews of these systems and others can be found in [161 and [23].

In the following. we discuss two classification and coding systems: the Opitz System and Multi-Class. The Opitz system is 0' interest because it was one of the first published classification and coding schemes for mechanical parts [31] (Historical Note 15.1) and is still widely used. MultiClass is a commercial product offered by the Organization for Industrial Research (OIR)

Opitz Classification System. This system was developed by H. Opitz of the University of Aachen in Germany. It represents one of the pioneering efforts in group technology and is probably the best known, if not the most frequently used, of the parts classification and coding systems. It is intended for machined parts. The Opitz coding scheme uses thc following digit sequence:

The basic code consists of nine digits, which can be extended by adding four more digits. The first nine arc intended to convey both design and manufacturing data. The interpretation of the first nine digits is defined in Figure 15.5. The first five digits, 12345, are called the form code. It describes the primary design attributes of the part, such as external shape (e.g., rotational vs. rectangular) and machined features (e.g., holes, threads, gear teeth, etc.]. The next four digits, 6789, constitute the supplementary code, which indicates some of the attributes that would be of use in manufacturing (e.g., dimensions, work material, starting shape, and accuracy). The extra four digits, ABCD, are referred to as the secondary code and are intended to identify the production operation type and sequence. The secondary code can be designed by the user firm to serve its own particular needs.

The complete coding system is too complex to provide a comprehensive description here. Opitz wrote an entire book on his system [31]. However, to obtain a general idea of how it works, let us examine the form code consisting of the first five digits. defined generally in Figure 15.5. The first digit identifies whether the part is rotational or nonrotational.1t also describes the general shape and proportions of the part. We limit our survey here to rotational parts possessing no unusual features, those with first digit values of O, 1, 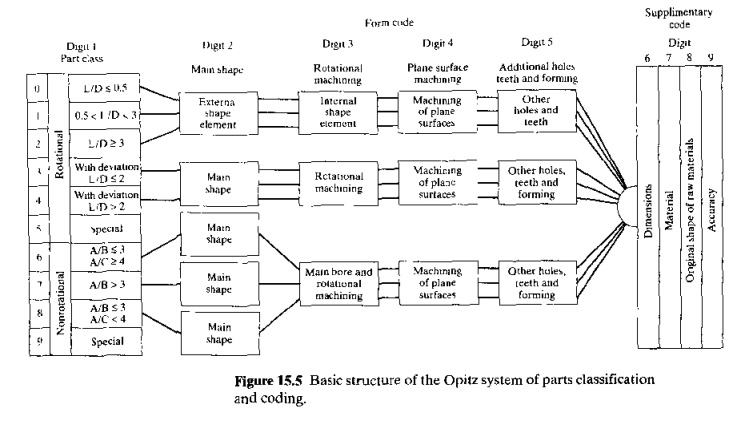 Or 2. For this etas, of work parts, the coding of the first five digits is defined in Figure 15,6. Consider the following example to demonstrate the coding of a given part.

Given the rotational part design  in Figure  15.7, determine the form code in the Opitz parts  classification and coding  system

Solution: With reference to Figure  15.6, the fivedigit  code  is developed as follows:

External shape: stepped on both  ends with screw thread on one end Digit 2 =  5

MultiClass. MultiClass is a classification and coding system developed by the Organization for Industrial Research (OIR). The system is relatively flexible, allowing the user company to customize the classification and COlling scheme 10 a large extent to fit its own products and applications. Multi Class can be used for a variety of different types of manufactured items, including machined and sheer metal parts, tooling, electronics, purchased 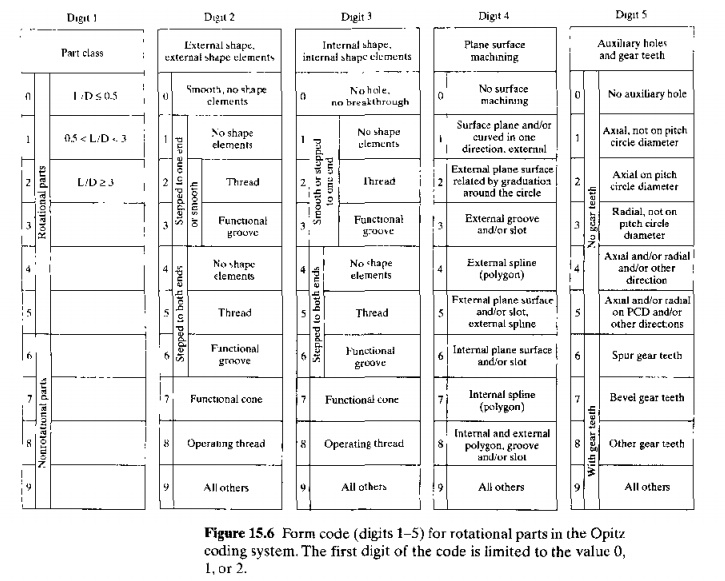 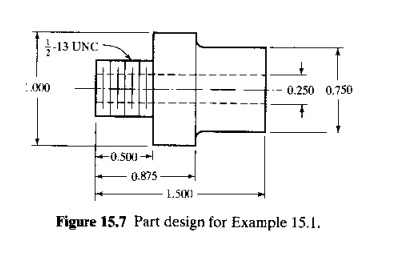 parts,  assemblies  and subassemblies,  machine  tools, and other  elements.  Up to nine different types of components  can be included within a single MultiClass software structure MultiClass  uses  a hierarchical   or decision-tree   coding  structure  in which  the succeeding  digits depend  on values  of the previous  digits. In the application  of the system, a series of menus, pick lists, tables, and other  interactive  prompting  routines  are used to code the part. This helps to organize and provide discipline to the coding procedure.

The coding structure consists of up to 30 digits. These are divided into two regions, one provided by GIR, and the second designed by the user to meet specific needs and requirements. A prefix precedes the code number and is used to identify the type of part (e.g., a prefix value of 1 indicates machined and sheet metal parts). For a machined part, the coding for the first 18 digit positions (after the prefix) is summarized in Table 15.2.

TABLE 15.2 First 18 digits of the Multiclass Classification and Coding System

Given the rotational part design in Figure 15.8, determine the IS digit code in the MultiClass  parts coding system. 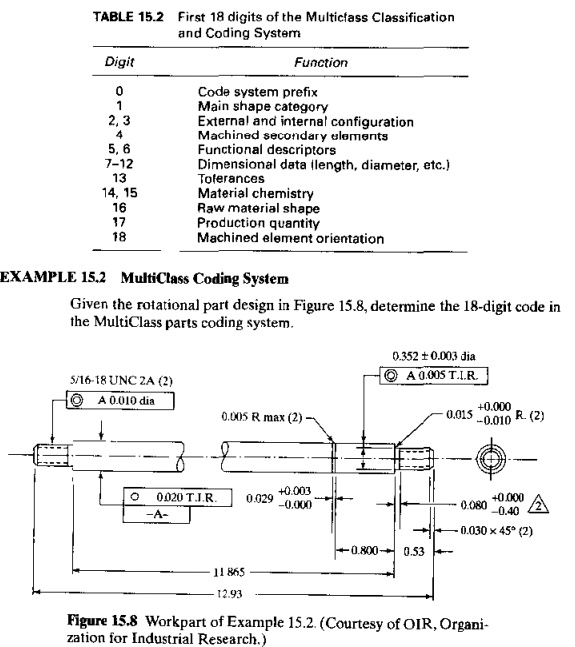 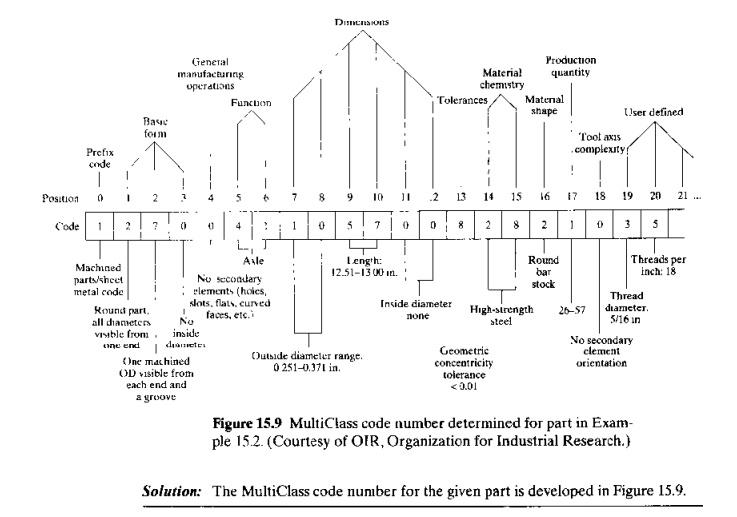