Under Article 79, the Parliament of the Union consists of the President and two Houses known respectively as the Council of States (Rajya Sabha) and the House of the People (Lok Sabha).

Under Article 79, the Parliament of the Union consists of the President and two Houses known respectively as the Council of States (Rajya Sabha) and the House of the People (Lok Sabha). The Union Legislature is bicameral, and the need for a bicameral system of the legislature in a federation is admitted: the Upper House represents the units, the Lower House represents the people; the two Houses respectively functions to preserve the integrity of the units and to secure the integration of the Union. The Rules of Procedure and Conduct of Business in Rajya Sabha is the booklet that provides explicit conduct of its members. There are various discussions namely: half an hour discussion, short duration discussion and motions of matters in public interests. 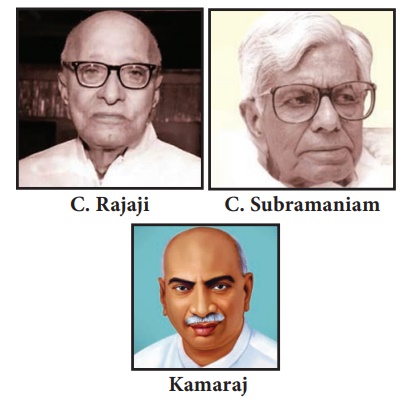 The first Assembly (1952-1957) under the constitution of India discussed the scheme of elementary education launched by the Rajaji Government and criticized by many including a few in the Congress party that it would perpetuate caste-based social hierarchy. After Kamaraj succeeded him, Education Minister C. Subramaniam in May 1954 informed the House that the scheme would be dropped. The Rajaji days are remembered for landmark laws to protect tenants of farmlands and landless agriculturists.

In 1967, the Dravida Munnetra Kazhagam came to power with C.N. Annadurai as Chief Minister. The Hindu Marriage Act was amended to recognize “self-respect marriages” or those marriages free of religious rituals. His successor and five-time Chief Minister, M. Karunanidhi, piloted several Bills and moved numerous motions. In his last bill (2006-2011), reservation were made for Muslims within the quota of Backward Classes and Arundathiyars within the reservation of Scheduled Castes.

The 10-year-long rule (1977-1987) of the Government, headed by M.G. Ramachandran of the All India Anna Dravida Munnetra Kazhagam, was noted for various measures in the area of revenue administration. Notably, the system of hereditary village officers such as “karnam” was abolished at one stroke. He upgraded the mid-day meal scheme into Nutritious Meal Scheme.

After the Supreme Court delivered the Mandal Commission judgment in November 1992 for reservation in education and employment at 50 percent, the Assembly responded through legislation aimed at safeguarding the existing 69 percent quota for Backward Classes, Most Backward Classes, Scheduled Castes, and Scheduled Tribes. 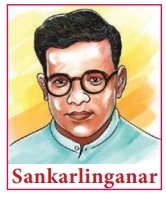 Sankarlinganar is a Tamil Indian Independence activist and Gandhian. He was born in Manmalai Medu in Virudhunagar District to Karuppasamy and Valliammal in 1895. He joined the Indian National Congress in 1917. He also participated in the Salt March in 1930 along with Gandhi under Rajaji’s influence. The consequence of Potti Sreeramalu fast demanding for a separate state of Telugu from Madras state for Telugu speaking people and Madras city to be its capital in 1952 led to new agitation in Madras state in need to change its name. 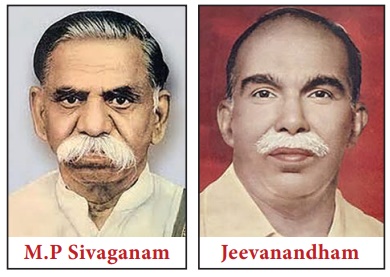 In 1956, Sankarlinganar started to fast on demand for change in the name of the state from Madras to Tamil Nadu. He started his hunger strike on 27th July on 1956 in Virudhunagar for 12 demands. Despite the request of C.N.Annadurai, M.P Sivaganam, and Jeevanandham, he continued to fast and died on the 76th day on 13th October 1956.

Under Rule 125 of the Rajya Sabha Rules and Procedures, any member may move a bill which is referred to a select committee and, when the motion is admitted, the bill shall be referred to such a committee.

The quorum needs to be one -third of the total number of members of the committee. In case of a tie on any matter, the chairman (or any other person presiding) will cast his vote. The select committee may appoint a sub-committee to examine any particular points connected with the bill. If any doubt arises on any aspect of the procedure the chairman may refer the point to the Rajya Sabha Chairman, whose decision will be final

Whenever a bill passed by one house is rejected by another house or any disagreement or more than six months has elapsed, the President of India may call a joint sitting of the two Houses to resolve the deadlock. The bill will be passed in both Houses by a majority of the total number of members of both Houses present and voting. There is no provision in the Indian Constitution for a joint sitting of both houses on a money bill or a Constitution Amendment Bill.

“Each House has full authority to regulate its procedure within the limits of the Constitution. Neither House, by itself, constitutes Parliament. It is the two Houses together that are the Parliament of India. The successful working of our Constitution, as of any democratic structure, demands the closest cooperation between the two Houses.”

1st August 2014: Use of Tamil as court language in Tamil Nadu

·           Under Article 333 of the Constitution of India, the Governor nominates one Member representing from Anglo-Indian Community. 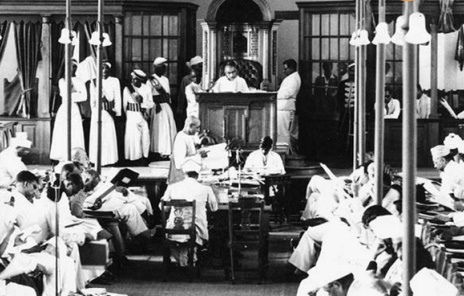 v Since the Committee became a Parliamentary Committee under the control of the Speaker from January 1950, it has presented 1596 Reports till April 2018.

v The State of Madras changed the name as State of Tamil Nadu on 14th January 1969.

v He was the only person in Indian History to end his life by observing fast for many days in Gandhiyan Way.