The classic publication in 1817 by James Parkinson de-fined the triad of distinguishing symptoms that bear his name; this movement disorder is known as Parkinson’s disease or parkinsonism.

The classic publication in 1817 by James Parkinson de-fined the triad of distinguishing symptoms that bear his name; this movement disorder is known as Parkinson’s disease or parkinsonism. It generally affects the elderly and is estimated to afflict more than 1% of individuals over the age of 65. A small subset of patients has famil-ial forms of parkinsonism with an autosomal dominant pattern of inheritance. Genetic mutations in three pro-teins have been identified thus far. These genes encode for -synuclein, a protein found in abundance in vesi-cles and synaptic regions, and for parkin and ubiquitin carboxy-terminal hydroxylase, both of which are in-volved with protein degradation.

Some forms of parkinsonism have been traced to specific entities, such as viral inflammation (e.g., the pos-tencephalitic parkinsonism of the early 1900s), brain trauma, stroke, and poisoning by manganese, carbon monoxide, pesticide, or 1-methyl-4-phenyl,-1,2,3,6-tetra-hydropyridine (MPTP). Intoxication with MPTP, a byproduct of the synthesis of an illegal meperidine ana-logue, produces a condition closely resembling parkin-sonism, but there is little evidence that this or a similar toxin exists in the environment. However, the informa-tion from research with this toxin has provided impor-tant insight into mitochondrial function and has led to the theory that impairment of mitochondrial function (whether of genetic or toxin derivation) may be a rele-vant risk factor in Parkinson’s disease.

Although the causes of some forms of parkinsonism are known, most cases are sporadic and are of unknown origin (idiopathic Parkinson’s disease). The causes are likely multifactorial, with genetic predisposition, envi-ronmental toxins, and aging contributing to the initiation and progression of the disease. There is a progressive loss of dopamine neurons with age. Relatively smooth functioning of motor control is maintained until neu-ronal loss is such that it causes an 80% reduction of dopamine in the striatum.At this time, clinical symptoms appear and then worsen with increasing neuronal loss.

Another form of parkinsonism is drug-induced, that is, iatrogenic parkinsonism, which often is a complica-tion of antipsychotic therapy, especially following the use of the butyrophenone and phenothiazine drug classes . Unlike idiopathic parkinson-ism, striatal content of dopamine is not reduced by ad-ministration of these drugs. In contrast, they produce a functional decrease in dopamine activity by blocking the action of dopamine on postsynaptic dopamine re-ceptors.

The onset of symptoms of Parkinson’s disease is usually gradual. The most prominent features of parkinsonism are tremor, rigidity, and bradykinesia, although the time of onset and the relative severity of each symptom may differ in individual patients. Tremors are often unilat-eral in onset, present at rest, and cease during voluntary movement. Rigidity, or increased muscle tone, described as jerky resistance that has been likened to the movement of a cogwheel (cogwheel rigidity), is also an indication of altered motor control. Bradykinesia, an extreme slowness of movement, is the most disabling feature because it affects all motor systems. Brady-kinesia results in a typical stooped posture when the person is standing or walking and a characteristic shuffling gait marked by the absence of normal arm-swinging movements. The absence of facial expression (masklike face) results from loss of facial muscle func-tion. Inability to swallow leads to drooling, while bradyki-nesia of the muscles in the larynx results in changes in voice quality. Orthostatic hypotension may also be ob-served and may complicate therapy. Cognitive dysfunc-tion and dementia are also seen in a small percentage of Parkinson’s disease patients, especially the elderly.

Parkinson’s disease is one of the few neurological dis-orders in which knowledge of the pathology led directly to the rational development of drugs to treat the dis-ease. The most prominent pathological findings in Parkinson’s disease are degeneration of the darkly pig-mented dopamine neurons in the substantia nigra, loss of dopamine in the neostriatum, and the presence of intra-cellular inclusion bodies known as Lewy bodies. Other neuronal populations are also affected in Parkinson’s disease to a much lesser extent, but they may contribute to some of the other pathology seen in parkinsonism (e.g., cognitive decline, depression, and dementia).

In postmortem examination of tissue, the substantia nigra is readily identifiable because of the dark pigmen-tation in the neurons that is the result of the accumula-tion of neuromelanin, a substance whose neurochemical composition is not completely known but is thought to derive from oxidized dopamine. Lewy bodies are com-posed of many cytoskeleton and other proteins, includ-ing -synuclein, ubiquitin, and synaptophysin. It is not clear whether the formation of these inclusions con-tributes to neuronal degeneration or they are merely a byproduct of degenerating neurons.

The basal ganglia can be viewed as modulators of mo-tor function. They are composed of several brain re-gions, including the neostriatum and the substantia ni-gra (Fig. 31.1). The neostriatum receives massive excitatory input from the cortex that is mediated by neurons that use glutamate as the neurotransmitter. The dopamine neurons originate in the substantia nigra pars compacta and project to the neostriatum, where they synapse on the input glutamatergic terminals and on striatal projection neurons that use the neurotransmit-ter γ-Aminobutyric acid (GABA). 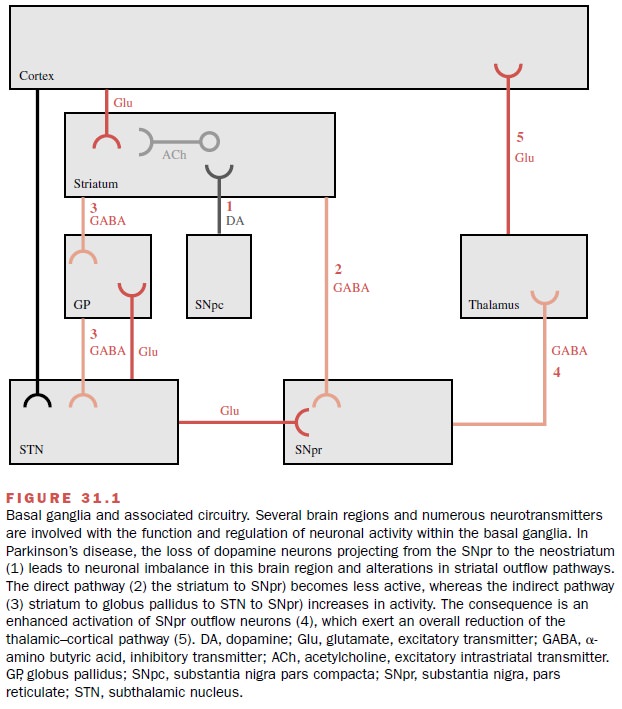 Dopamine is a catecholamine whose actions are mediated by dopamine receptors that are classified as D1-like (D1, D5) or D2-like (D2, D3, D4). Dopamine actions on D1 receptors ex-ert an excitatory effect, whereas the actions of dopamine on D2 receptors inhibit neuronal activity. The loss of striatal dopamine produces an imbalance in in-formation processing in the neostriatum that modifies transmission in other basal ganglia regions. Also impor-tant in neural transmission are the striatal interneurons that are found within the confines of the striatum, that use the excitatory neurotransmitter acetylcholine, and that modulate the activity of striatal output neurons.

The mechanisms responsible for the degeneration of dopamine neurons are not known, but hypotheses in-clude effects such as oxidative stress and excitotoxicity. 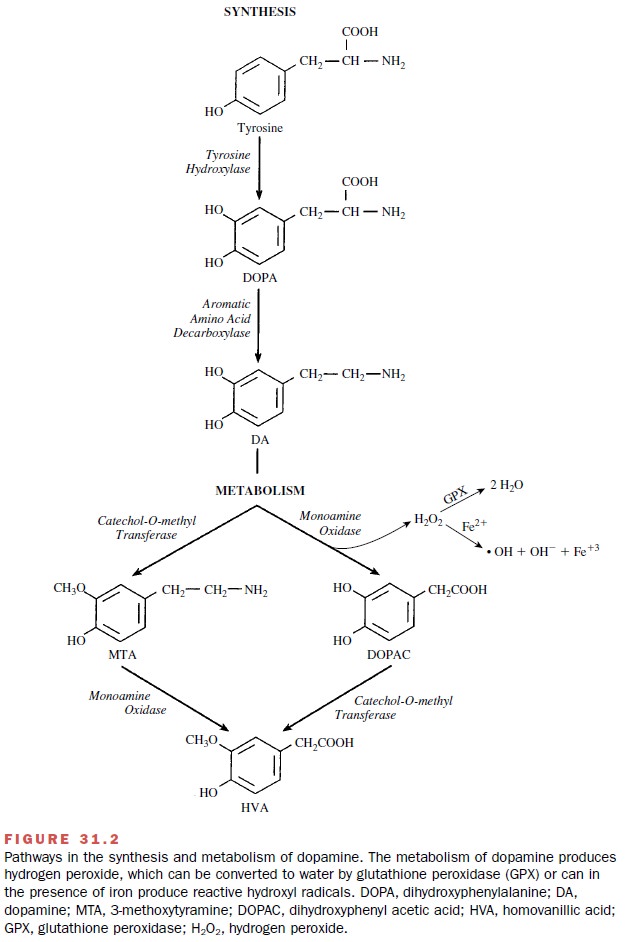 The inability of the neurons to eliminate the oxidative load may result in a self-perpetuating cycle of oxidative damage that ultimately leads to neuronal death. One source of oxidative stress may be dopamine metabolism (Fig. 31.2). The excessive excitatory activity in the sub-stantia nigra created by the loss of dopamine actions within the striatum could lead to excitotoxicity that is mediated by glutamate.

Since there is no cure for parkinsonism, the aim of phar-macological therapy is to provide symptomatic relief. This is obtained through the use of drugs that either in-crease dopaminergic actions or diminish neuronal out-flow from the striatum. These drugs include levodopa, which increases brain dopamine levels; dopamine ago-nists, which directly stimulate dopamine receptors; monoamine oxidase (MAO) inhibitors, which prevent dopamine metabolism; and anticholinergic agents, which reduce the excitatory activity within the striatum (Fig 31.3). 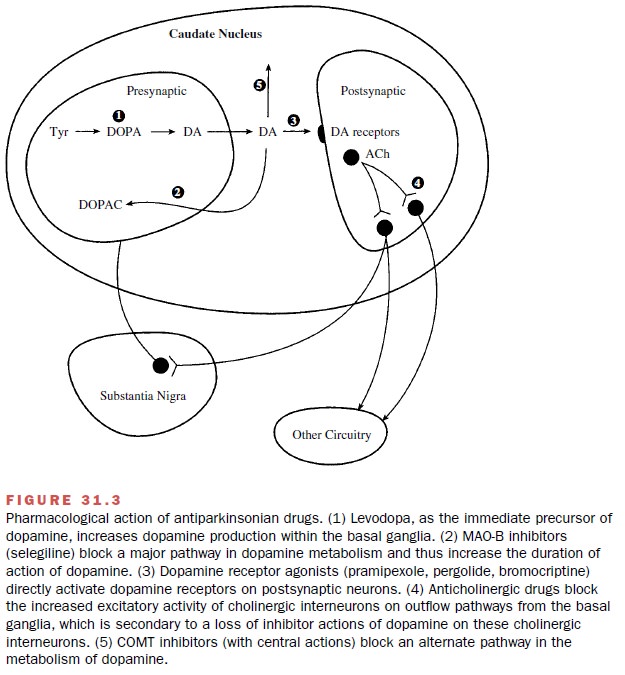