‘Where would she have gone, Payal?’ her mother said crossly. ‘She was right there, sleeping in her cage a little while ago.’ 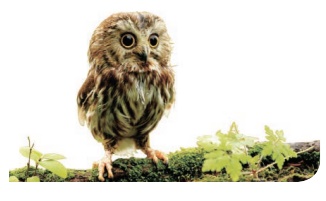 ‘But she’s not there now. And, Mom, the door to the garden is open!’ That got Payal’s mother running into the room. Sure enough, there was no sign of Owlie.

What was an owl doing in a house, you ask? Well, Payal’s house was home to all kinds of creatures, mainly abandoned animals. People brought lost dogs, injured cats and baby birds that had fallen out of their cages to Payal’s mother. It wasn’t that they had a large farm or even a large house. It’s just that everyone knew that Payal’s mom had a BIG heart! But even in a household used to such unexpected visitors, Owlie’s advent had been memorable. Shefali didi had just turned up one day, carrying a carton.

When Payal’s mother opened the carton, there was the smallest of owlets sitting in one corner, a small ball of brown and grey. Payal’s mother picked her up gently and placed her in her lap, talking to her just as she would to the dogs. She had never handled owls before, so she was very careful not to get pecked. When the owl got used to her, and seemed relaxed enough, Payal’s mother placed her inside a cage. There were always empty cages in Payal’s house – just in case a bird dropped in! The baby owl climbed on the rod and settled herself.

‘Mom, what shall we call her?’ asked Payal, all excited.‘You choose a name’, said her mother, smiling.‘How about Owlie?’ asked Payal. So Owlie it was.The name was settled, but there was a bigger problem. What does one feed an owl?

Owls are hunters. They eat rats and snakes and frogs. And in Payal’s house, they were all vegetarian, even the dogs! Payal’s mother was totally anti-meat. But now that Owlie had come to stay, she had to get over her dislike for meat. That was another reason why that day was memorable. It was the first day that meat was brought to the house! Payal got the number from her friend and called the meat shop to ask them to deliver half a kilogram of minced meat to the house. They put the meat before Owlie.

Of course, Owlie didn’t know what to do with it. She was just a baby, after all. If the mother owl had been there, she would have softened the meat and shoved it down Owlie’s throat. Payal’s mother decided she had to be mother owl! She picked up a tiny bit of meat with her right hand and squished it up until it was soft. Then with her left hand, she pressed open Owlie’s beak and shoved the food down. In a second, Owlie fell off her perch on to the floor of the cage. She lay on her back on the floor of the cage with feet up in the air.

‘Mom!’ Payal cried, ‘You’ve killed her!’ Payal’s mother was equally aghast. ‘Oh!’ she said. ‘Oh, what have I done ? The poor, little bird!’ After Payal and her mother had finished crying and hugging each other, they started talking bravely about where to bury Owlie. Just then, Owlie opened one eye and then the other. She got onto her feet and quietly climbed the perch!

Payal learnt later that falling on her back and pretending to be dead was Owlie’s way of defending herself against danger. Not that Payal’s mother was a danger to Owlie, but the baby owl did not know that then. So that was Owlie’s first day at home.

In the beginning, Owlie had to be forced to eat. That was Mom’s job. But Owlie soon realised that if a hand came towards her it meant food! Her mouth would open automatically and her beak would snap around what was offered. Only, Owlie found it difficult to know when she was being offered food, and would try to take a bit out of any hand that came her way. This meant lots of bitten fingers for Payal and her mother. 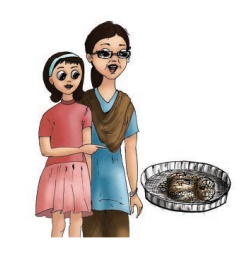 Reading up more about owls and their habits, Payal discovered that Owlie was a Spotted Owlet. She had the typical grey-brown coat, heavily spotted with white, the pale face, yellow eyes and the white neckband, which looked like a ribbon, Payal decided. Soon, Payal took over the job of looking after Owlie. She saw that the cage was cleaned every day. She filled the water bowl. Once Owlie began to eat by herself, Payal too could feed her. She loved the way Owlie took a piece of raw meat from her hand. During the day, Payal kept the cage covered. Owls are night birds, so they slept during the day. At night, when owls are active, Payal took off the cover. They had decided that they would let Owlie fly away once she had grown bigger. But that meant that she had to learn to fly. To do that, Owlie had to be in a closed room.

After much discussion, Owlie’s cage was shifted to the library. It was a lovely room with two doors – one which led to the rest of the house and the other that opened into the garden. It was also Payal’s favourite room. It had tall bookshelves and she spent hours there, reading all kinds of books. The bookshelves also had lots of little knickknacks. Her mother loved pretty things, and displayed them here along with the books. So there were beautiful pieces of pottery, dolls from wherever they had travelled, and of course wooden and clay animals and birds from all around the world.

Once Owlie was moved to the library, strict rules were laid down for everyone in the house. The two doors were never to be left open – not at night, not in the day. Every night, Payal would leave the cage door open and put a plate of mincemeat on top of the cage. This was so that when Owlie flew out of her cage, she could also learn to find her food.

Initially, Payal would shut the cage door every morning when she popped in to say hello to Owlie before going to school. She would always find Owlie on her perch inside the cage, though the cage door was still open. But Payal knew Owlie was flying because she found bits of meat all over the room. After some time, Payal stopped shutting the cage door even during the day. After all, people seldom went into that room all day, and Owlie was always asleep, so there seemed little point.

Every day when Payal came back from school, the first thing she did was to peep into the library. Usually, she would find Owlie fast asleep on her perch. But today, it was different. The cage was empty and there was no sign of Owlie! And the door to the garden was open.‘Mom!’ Payal howled. ‘Who left the garden door open? How will we find Owlie now? ‘Don’t panic,’ said Mom. ‘She must be somewhere around.’ They shut the garden door and looked in every corner of the room. Behind doors, on top of the tall bookshelves, in every nook and cranny. No Owlie.

Tears ran down Payal’s cheeks. They had wanted Owlie to fly away, but not so soon. She was still so small, how would she hunt for her food? What if a kite or eagle swooped down on her? Finally, Mom said, ‘Well, now Owlie has gone, we may as well leave the doors open and air the room.’ Wiping her tears, Payal threw open the doors to the room. She hoped secretly that Owlie would come in if the doors were kept open.

Mom left the room to go do her afternoon errands. When she came back a couple of hours later, Payal was sitting, gazing mournfully at Owlie’s cage.‘Why don’t you find yourself a good book to read?’ Mom asked. She knew that reading a book was the only way Payal would cheer up. When Payal was sad, she always read.‘Okay,’ sighed Payal, and started looking for a book she had not read.

She noticed a curio on a shelf that she had never noticed before. Hello? Where did this one come from, she wondered. Where did her mother get the owl from? She was about to pick it up when the curio opened one eye... It was Owlie pretending to be a curio! ‘Mom!’ bawled Payal. ‘She’s back!’ ‘Don’t you ever give me a fright like that again,’ she scolded the owl as she put her back in her cage. Payal swore later that Owlie winked back at her. She probably did.