Overview of the Classification System - Infancy and Early Childhood

Overview of the Classification System

The axes in this system are not intended to be entirely symmetrical with such other systems as DSM-IV and the In-ternational Statistical Classifi cation of Diseases and Related Health Problems, 10th Revision (ICD-10) because this system, in dealing with infants and young children, focuses on devel-opmental issues. Dynamic processes, such as relationship and developmentally based conceptualizations of adaptive patterns (i.e., functional–emotional developmental level), are therefore of central importance.

Use of the system will provide the psychiatrist with a “di-agnostic profile” of an infant or toddler. Such a diagnostic pro-file focuses the psychiatrist’s attention on the various factors that are contributing to the infant’s difficulties as well as on areas in which intervention may be needed.

The following are the Axis I primary diagnoses that have thus far been suggested:

A continuum of symptoms related to a single event, a series of connected traumatic events, or chronic enduring stress.

a)        Reexperiencing of the trauma, as evidenced by

ii)       recurrent recollections of the traumatic event outside play

iv)     distress at reminders of the trauma

b)       Numbing of responsiveness or interference with develop-mental momentum

Focuses on the infant’s experience and on symptoms that are a general feature of the child’s functioning rather than specific to a situation or relationship.

Levels of anxiety or fear, beyond expectable reactions to normal developmental challenges.

i)          Excessive separation or stranger anxiety

v)       Agitation, uncontrollable crying or screaming, sleeping and eating disturbances, recklessness, and other behaviors Criterion: Should persist for at least 2 weeks and interfere with appropriate functioning.

xii)  Sensitivity to any reminder of the caregiver

Pattern of depressed or irritable mood with diminished interest or pleasure in developmentally appropriate activities, diminished capacity to protest, excessive whining, and diminished social interactions and initiative. Disturbances in sleep or eating. Criterion: At least 2 weeks.

2.        Becomes manifest during the sensitive period of gender identity development (between approximately 2 and 4 years).

i)          A strong and persistent cross-sex identification

ii)       repeatedly states desire to be, or insistence that he or she is, the opposite sex

vi)     strong preference for playmates of the opposite sex

i)          Persistent parental neglect or abuse, of a physical or psy-chological nature, undermines the child’s basic sense of security and attachment.

ii)       Frequent changes in, or the inconsistent availability of, the primary caregiver.

3.        Mild, transient situational disturbances related to a clear environmental event and lasting no longer than 4 months.

Difficulties in regulating physiological, sensory, attentional, motor, or affective processes and in organizing a calm, alert, or affectively positive state. Observe at least one sensory, sensory–motor, or processing difficulty from the following list, in addition to behavioral symptoms.

v)       Underreactivity to touch or pain

xvi)         Qualitative deficits in capacity to attend and focus

d)       Withdrawn and difficult to engage

i)          Behavioral patterns: creative and imaginative, with a ten-dency to tune into her or his own sensations, thoughts, and emotions

Only presenting problem; younger than 3 years of age; no accompanying sensory reactivity or sensory processing difficulties. Difficulty in initiating or maintaining sleep; may also have problems in calming themselves and dealing with transitions from one stage of arousal to another.

700. Disorders of Relating and Communicating

i)          Significant impairment in, but not complete lack of, the ability to form and maintain an emotional and social rela-tionship with primary caregiver

These children are aimless and unrelated most of the time, with severe difficulty in motor planning, so that even simple intentional gestures are difficult.

These children are intermittently related and capable, some of the time, of simple intentional gestures.

These children evidence a more consistent sense of relatedness, even when they are avoidantor rigid

The diagnostic system also includes an Axis II for relationships classification. Three aspects of a relationship are considered: 1) behavioral quality of the interaction, 2) affective tone, and 3) psy-chological involvement. The types of relationship problems are as follows:

ii.               Lack of consistency between expressed attitudes about in-fant and quality of actual interactions

Tense, constricted with little sense of relaxed enjoyment or mutuality.

Combination of the features described above.

i)          Intended to severely belittle, blame, attack, overcontrol and reject the infant or toddler

iii)     May include verbal and emotional abuse or sexual abuse

iii)     May include verbal and emotional abuse or physical abuse

On Axis III, one indicates any coexisting physical (including medical and neurological), mental health, or developmental dis-orders. DSM-IV, ICD-9 or ICD-10 for the primary care setting classifications are used. Occupational therapy, physical therapy, special education and other designations are specified. 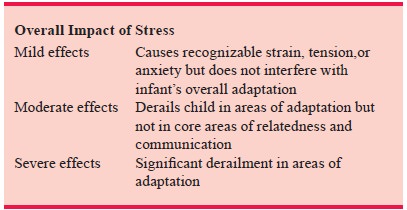 A. Essential processes or capacities

1.        Mutual attention: ability of dyad to attend to one another

6.        Representational differentiation I: pretend play and symbolic communication in which ideas are logically related; knows what is real and unreal

B. Functional–Emotional Developmental Level Summary, which documents the child’s achievement

2.        At expected level but with constrictions – not full range of affect; not at this level under stress; only with certain caregivers or with exceptional support

3.        Not at expected level but has achieved all prior levels

4.        Not at current expected level but some prior levels