All outlet water discharged from aquaculture facilities can present environmental problems which create an imbalance in the ecosystem in the recipient water body.

All outlet water discharged from aquaculture facilities can present environmental problems which create an imbalance in the ecosystem in the recipient water body. This is especially important when the outlet water is discharged into freshwater. Freshwater recipient water bodies are of limited volume, whereas the sea represents an infinitely large water body; therefore the consequences of a discharge into a freshwater recipient, such as a small lake, will be much greater for both open and closed production units.

The effluent discharged from a fish farm can contain three classes of pollutant (Fig. 3.1): 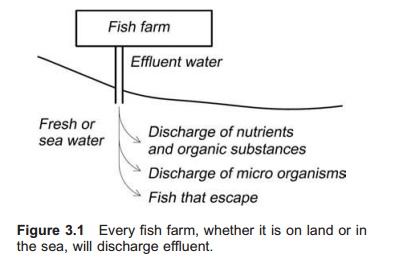 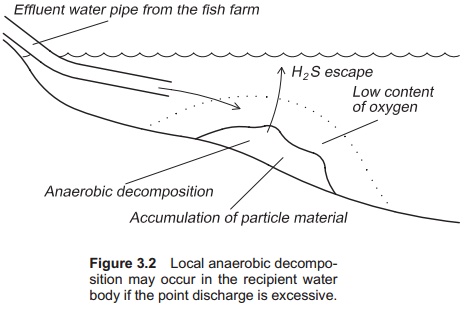 The larger concentration of biological material in a restricted volume compared to the case in natural conditions means that possibilities for disease out-breaks in a fish farm are greater than in the wild. The effluent water may therefore also contain a higher concentration of pathogenic micro-organisms such as parasites, bacteria, viruses and fungi, that can cause disease in the fish population. This may again have significant consequences for the wild fish in the recipient water body. If there are possibilities for ‘short circuiting’, the fish farm may function as a facility for increasing the concentra-tion of pathogens (Fig. 3.3). For land-based fish farms this can be illustrated with pathogens that are ejected in the effluent water from the farm and are 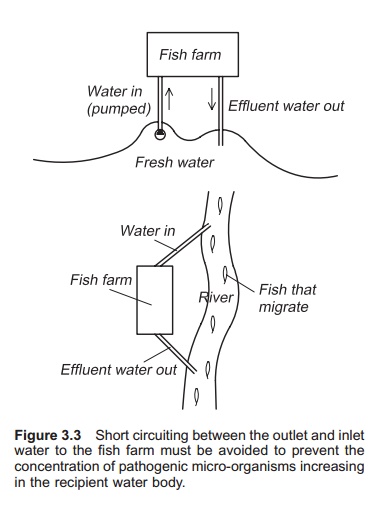 taken in again with the inlet water. This also shows the importance of not having these pipes too close to each other. The best arrangement is to have them in different water bodies, or to treat either the inlet or the outlet water. Fish that migrate can also be a host for transporting micro-organisms up rivers, meaning that short circuiting also can occur here. Migration obstructions in the river may be a solution.

Moving aquatic organisms from one farm to another may, via the water used for transport, bring new micro-organisms to the recipient farm. The result can be an outbreak of disease on the fish in the recipient farm. Some wild stocks may, through natural evolution, have developed natural immu-nity against some pathogenic micro-organisms while others may represent a large threat. An example of this is the salmon parasite Gyrodacty-lussalariswhere the Atlantic salmon in a few rivershave developed immunity, whereas in most rivers the stocks have no immunity. When moving fish containing such micro-organisms between rivers, or between farms with outlets to different recipients, the consequences can therefore be fatal. Treatment of the effluent water is absolutely necessary in such cases.

Escape of fish or other aquatic organisms from farm conditions may also present environmental problems, except where local stock that not has gone through to a breeding programme is used on the farm. If the stocks have gone to a centralized breeding programme where mixing of local stocks from different districts occurs, or much more seriously, if genetic manipulations have been per-formed, there may be significant consequences attending escapes. The fish farming industry has benefitted greatly from national breeding pro-grammes; for example, growth rates and feed uti-lization have been improved. What can happen when several fish escape from a farm? One possibility is that they can establish

their own stock in the recipient water body. This may result in competition for feed and habitat with the naturally occurring stocks. Another possibility is that they can interbreed with the local stocks and create unwanted hybrids. Even if no interbreeding occurs the escaped fish can destroy the breeding grounds or breeding nests of the wild stocks. Of course, none of this is wanted and therefore is it very important to try to avoid escape of fish and other aquatic organisms from farm conditions.