Home | | Social Science 6th Std | Other Symbols of our Country

Other Symbols of our Country

Other Symbols of our Country 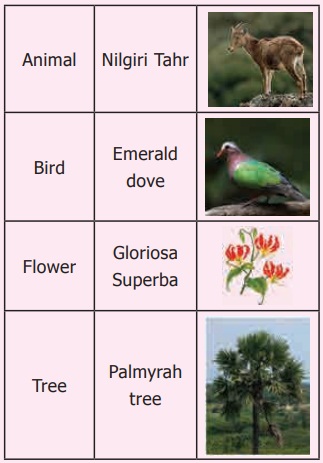 The tricolour flag is our National flag. The three colours are of the same width and are arranged horizontally. The saffron at the top represents valour and sacrifice. The green at the bottom represents fertility and prosperity. The white band in between represents honesty peace and purity. The Ashoka chakra or the wheel in navy blue represents truth and peace.

Out National Flag’s length and width proportion is 3:2 respectively and the Ashoka’s chakra has 24 spokes in it. 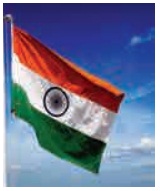 The four lions on top of the Ashoka Pillar at Sarnath was chosen to be our National emblem. The national emblem was accepted on 26th January 1950, ‘Satyameva Jayate” has been inscribed at its bottom. It means ‘Truth alone triumphs’. The National emblem consists of two parts-the upper and the lower parts.

Who has been given the right to manufacture the National flag?

Tirupur Kumaran was born in Chennimalai of Erode district. As a youth, he actively participated in the freedom struggle for India. In 1932, when Gandhiji was arrested, protests were held against the arrest all over the country. When protests were held for Gandhiji’s release, Tirupur Kumaran took active part in it. He lost his life when the police attacked violently. He held on to the tricolor flag even when he died. He was honoured with the title, ‘Kodi Kaatha Kumaran’. The Government of India has released a postal stamp on his centenary year to remember Tirupur Kumaran’s sacrifice and dedication to the nation.

* The National flag was designed by Pingali Venkayya from Andhra Pradesh.

* The first Indian Flag was woven at Gudiyatham in Vellore district of Tamilnadu.

* This flag is now an exhibit at the St.George’s Fort Museum, Chennai.

The upper part has four lions facing the North, South, East and West. This is on a circular pedestal. One can only see three lions at a time.

The lower part has an elephant, a horse, a bull and a lion. The ‘Wheel of righteousness’ is placed between them. This emblem is found at the top of the government communication, Indian currency and passport. 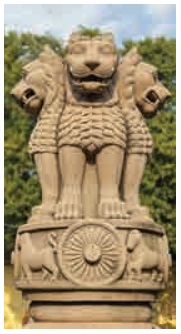 The four lions, chosen from the Sarnath pillar of Ashoka as our emblem, is now placed in the Sarnath Museum.

‘Jana Gana Mana’ is our National anthem. It symbolises the sovereignty and intergrity of our nation. This anthem was written by Rabindranath Tagore in Bengali. This was transcripted in Hindi and was accepted by the Constituent Assembly on 24th January 1950.

The rules to be observed while singing the Anthem

• This anthem has to be sung at a duration of 52 seconds.

• Everyone should stand erect while singing the national anthem.

• One should understand the meaning while singing.

On 27th December 1911 this National anthem was sung for the first time during the Congress committee meet held at Kolkata.

The song Vande Mataram, composed by Bankim Chandra Chatterjee, was a source of inspiration to the people of India in their struggle for freedom. It has an equal status with Jana Gana Mana. On January 24, 1950, the then President, Dr. Rajendra Prasad came up with a statement in the Constituent Assembly, “the song Vande Mataram, which has played a historic part in the struggle for Indian freedom, shall be honoured equally with Jana Gana Mana and shall have equal status with it.”

The song was a part of Bankim Chandra’s most famous novel ‘Anand Math’.

“India is my country. All Indians are my brothers and sisters” is our national pledge. The pledge was written by Pydimarri Venkata Subba Rao in Telugu. 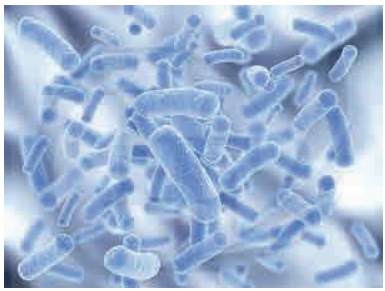 The curd which we consume every day is curdled from milk by a micro organism called lacto bacillus delbrueckii. This was accepted as our national micro organism in the year 2012. This micro organism makes the milk undergo a chemical reaction and changes the protein content of the milk. Curd is known for its digestive quality and cooling capacity.

The Indian currency is the Indian Rupees. The currency released by SherShah Sur in the sixteenth century was ‘Rupiya’. This ‘rupiya’ has been transformed, into ‘Rupees’. The symbol of rupees is ₹. This was designed by D. Udhayakumar from Tamil Nadu in the year 2010.

During the reign of Emperor Kanishka he began following a new calendar in the year 78 CE/AD. The year begins from the spring equinox which falls on March 22nd. During a leap year, it begins on March 21st. Our country follows this calendar. The famous astronomer Meghnad Saha headed the Calendar Reformation Committee on 22nd March 1957. It was then accepted by the committee as our national calendar.

The National symbols help in uniting the diversified sections of India and to instill patriotism.