Chapter: Essentials of Anatomy and Physiology: Cell Structures and their Functions

Organelles - Cell Structures and their Functions

A.   Describe the structure and function of the nucleus andthe nucleoli.

B.   Compare the structure and function of rough and smoothendoplasmic reticulum.

C.    Describe the roles of the Golgi apparatuses and secretoryvesicles in secretion.

D.  Explain the role of lysosomes and peroxisomes in digestingmaterial taken into cells by phagocytosis.

E.  Describe the structure and function of mitochondria.

F.   Describe the structure and function of the cytoskeleton.

G. Describe the structure and function of centrioles.

H.  Compare the structure and function of cilia, flagella,and microvilli.

The nucleus (noo′klē-ŭs; a little nut or the stone of a fruit) is a large organelle usually located near the center of the cell (see figure 3.1). All cells of the body have a nucleus at some point in their life cycle, although some cells, such as red blood cells, lose their nuclei as they mature. Other cells, such as skeletal muscle cells, contain more than one nucleus.

The nucleus is bounded by a nuclear envelope, which con-sists of outer and inner membranes with a narrow space betweenthem (figure 3.13). At many points on the surface of the nucleus, the inner and outer membranes come together to form nuclearpores,through which materials can pass into or out of the nucleus. 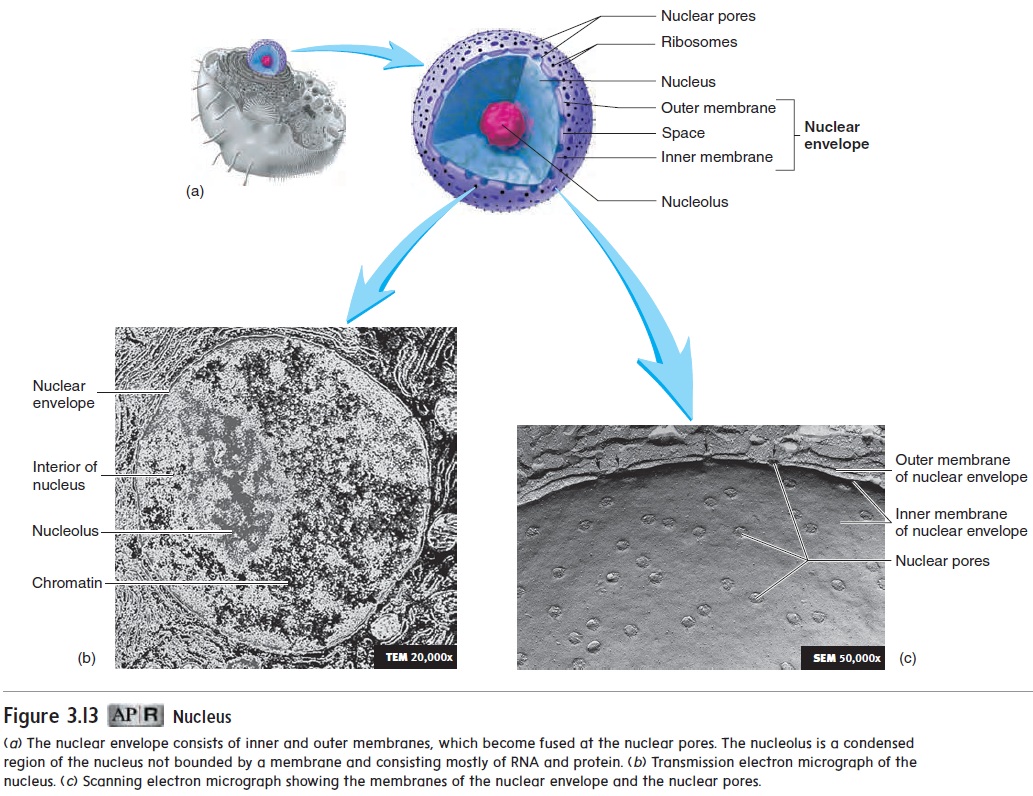 The nuclei of human cells contain 23 pairs of chromosomesmō′-somz), which consist of DNA and proteins. During most(krōof a cell’s life, the chromosomes are loosely coiled and collectively called chromatin (figure 3.14; see figure 3.13b). When a cell prepares to divide, the chromosomes become tightly coiled and are visible when viewed with a microscope (see “Cell Life Cycle” later). The genes that influence the struc-tural and functional features of every individual are portions of DNA molecules. These sections of DNA molecules determine the structure of proteins. By determining the structure of proteins, genes direct cell structure and function. 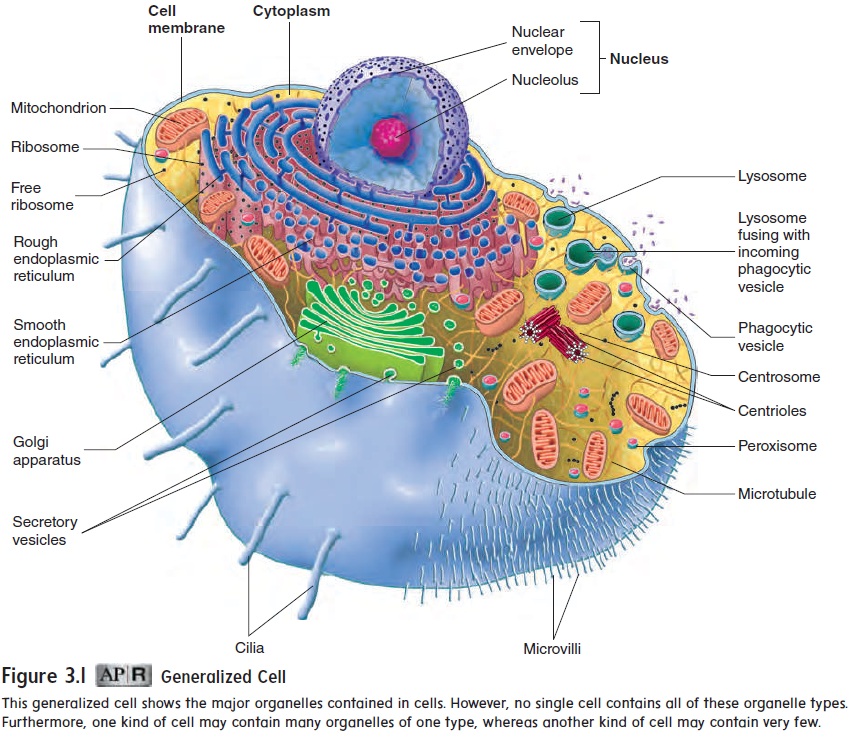 Nucleoli (noo-klē′ō-li; sing. nucleolus, little nucleus) are dif-fuse bodies with no surrounding membrane that are found within the nucleus (see figure 3.13). There are usually one to several nucleoli within the nucleus. The subunits of ribosomes, a type of cytoplasmic organelle, are formed within a nucleolus. Proteins produced in the cytoplasm move through the nuclear pores into the nucleus and to the nucleolus. These proteins are joined to ribosomal ribonucleic (rı̄′bō-noo-klē′ik) acid (rRNA), producedwithin the nucleolus, to form large and small ribosomal subunits (figure 3.15). The ribosomal subunits then move from the nucleus through the nuclear pores into the cytoplasm, where one large and one small subunit join to form a ribosome during protein synthesis. 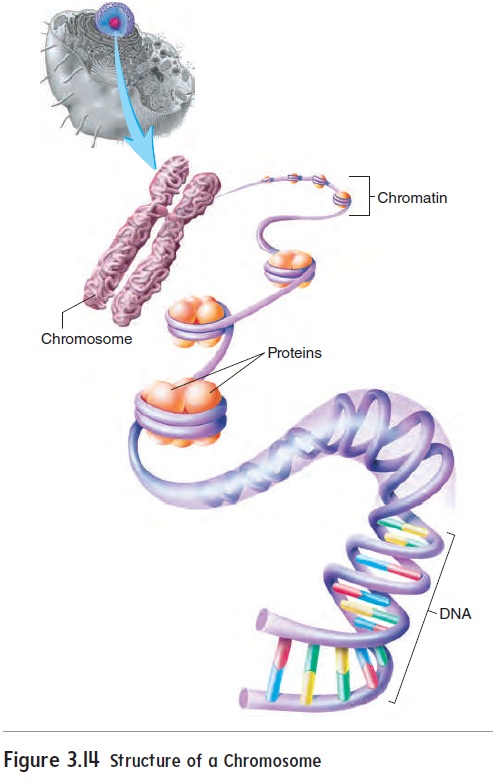 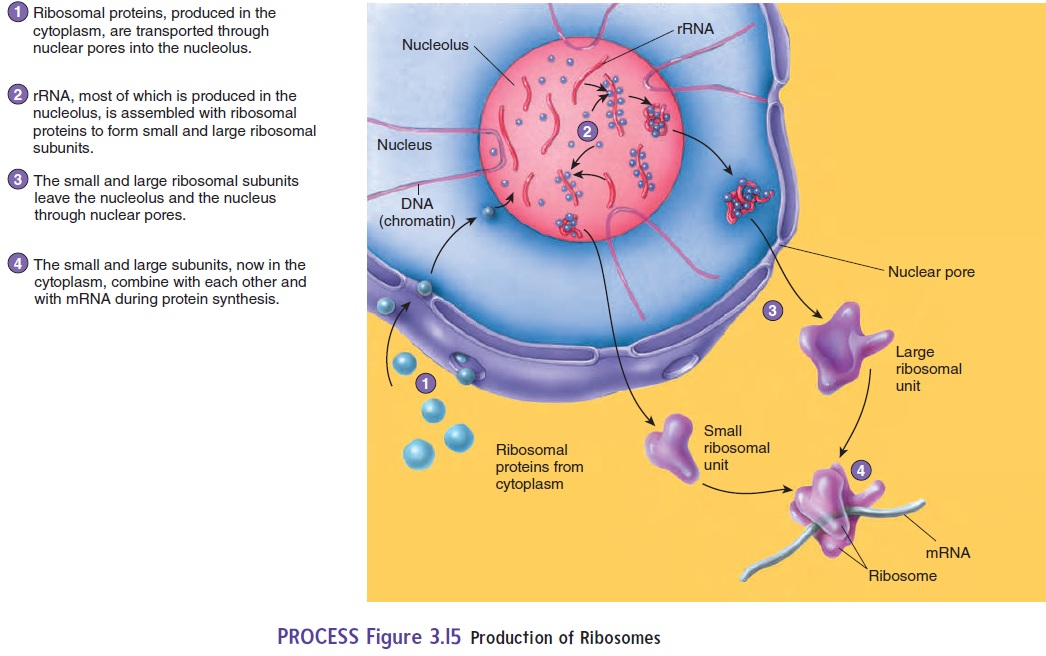 The endoplasmic reticulum (en′dō-plas′mik re-tik′ū-lŭm; rete, a network) (ER) is a series of membranes forming sacs and tubules that extends from the outer nuclear membrane into the cytoplasm (figure 3.16). Rough ER is ER with ribosomes attached to it. A large amount of rough ER in a cell indicates that it is synthesiz-ing large amounts of protein for export from the cell. On the other hand, ER without ribosomes is called smooth ER. Smooth ER is a site for lipid synthesis and participates in detoxification of chemicals within cells. In skeletal muscle cells, the smooth ER stores calcium ions. 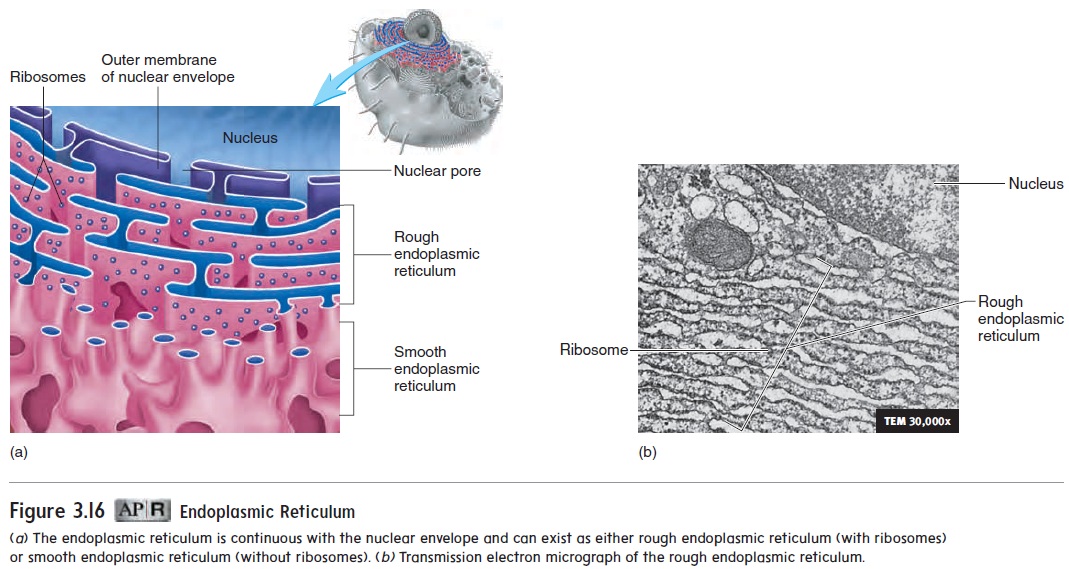 The Golgi (gol′jē) apparatus consists of closely packed stacks of curved, membrane-bound sacs (figure 3.17). It collects, modi-fies, packages, and distributes proteins and lipids manufactured by the ER. For example, proteins produced at the ribosomes enter the Golgi apparatus from the ER. In some cases, the Golgi appa-ratus chemically modifies the proteins by attaching carbohydrate or lipid molecules to them. The proteins then are packaged into membrane sacs, called secretory vesicles, that pinch off from the margins of the Golgi apparatus. The Golgi apparatus is present in larger numbers and is most highly devel-oped in cells that secrete protein, such as those of the salivary glands or the pancreas. 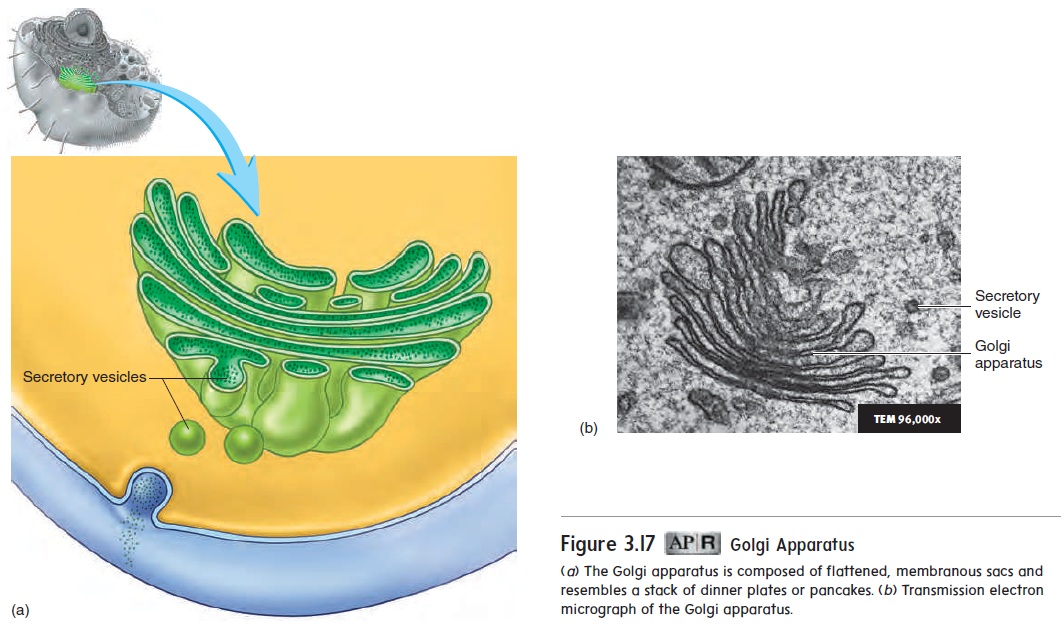 Lysosomes (lı̄′sō-sōmz) are membrane-bound vesicles formedfrom the Golgi apparatus. They contain a variety of enzymes that function as intracellular digestive systems. Vesicles formed by endocytosis may fuse with lysosomes (figure 3.18). The enzymes within the lysosomes break down the materials in the endocytotic vesicle. For example, white blood cells phagocytize bacteria. Then enzymes within lysosomes destroy the phagocytized bacteria. 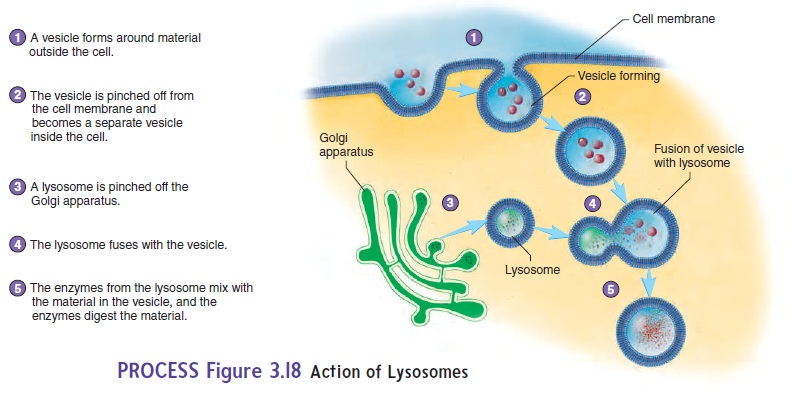 Mitochondria are the major sites of adenosine triphosphate (ATP) production within cells. Mitochondria carry out aerobic respiration, a series of chemical reactions that require O2 to break down food molecules to produce ATP. ATP is the main energy source for most chemical reactions within the cell, and cells with a large energy requirement have more mitochondria than cells that require less energy. For example, cells that carry out extensive active transport, described earlier, contain many mitochondria. When muscles enlarge as a result of exercise, the mitochondria increase in number within the muscle cells and provide the additional ATP required for muscle contraction.

The cytoskeleton (s̄ı -t̄o -skel′ĕ -ton) consists of proteins that support the cell, hold organelles in place, and enable the cell to change shape. These protein structures are microtubules, micro-filaments, and intermediate filaments (figure 3.20). 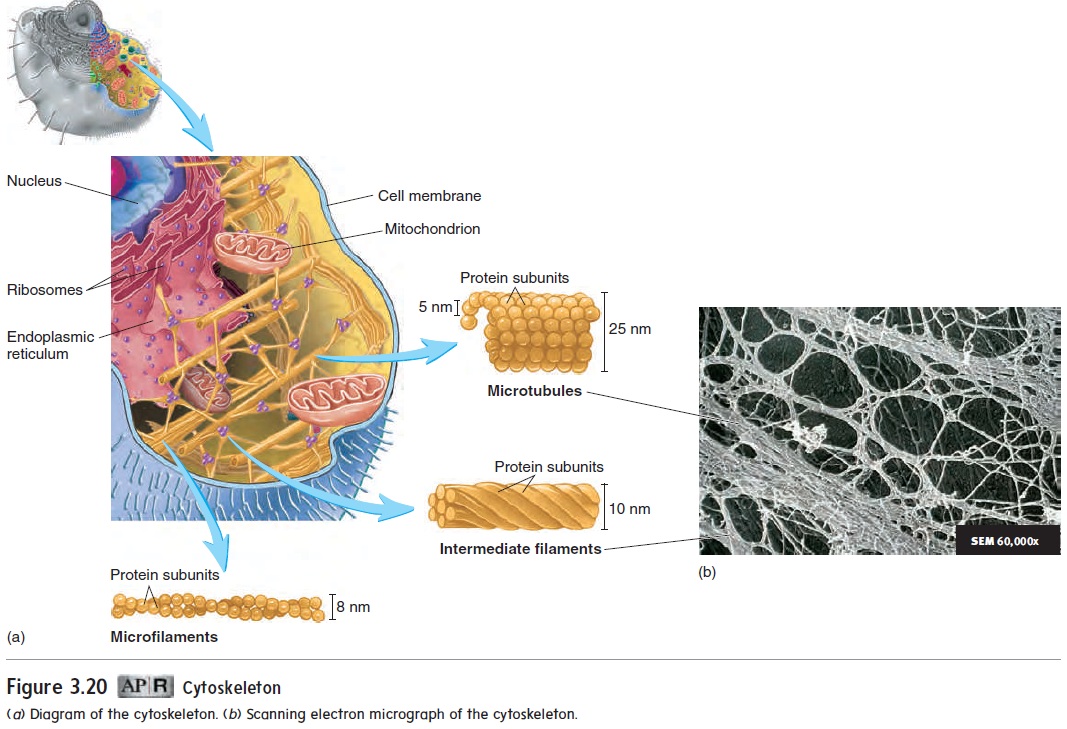 Microtubules are hollow structures formed from protein sub-units. They perform a variety of roles, such as helping support the cytoplasm of cells, assisting in cell division, and forming essential components of certain organelles, such as cilia and flagella.

The centrosome (sen′trō-sōm) is a specialized zone of cytoplasm close to the nucleus, where microtubule formation occurs. It con-tains two centrioles (sen′trē-ōlz), which are normally \oriented perpendicular to each other. Each centriole is a small, cylindrical organelle composed of nine triplets; each triplet consists of three parallel microtubules joined together (figure 3.21). Additional microtubules, extending from the area of the centrioles, play an important role in cell division, as we learn later in “Mitosis.”

Cilia (sı̆l′ē-ă; sing. cilium, an eyelash) project from the surface ofcells (see figure 3.1). They vary in number from none to thousands per cell and are capable of moving. Cilia are cylindrical structures that extend from the cell. Cilia are composed of microtubules, orga-nized in a pattern similar to that of centrioles, which are enclosed by the cell membrane. Cilia are numerous on surface cells that line the respiratory tract. Their coordinated movement transports mucus, in which dust particles are embedded, upward and away from the lungs. This action helps keep the lungs clear of debris.

Flagella (flă-jel′ă; sing. flagellum, a whip) have a structure similar to that of cilia but are much longer, and they usually occur only one per cell. Sperm cells each have one flagellum, which propels the sperm cell.

Microvilli (mı̄′krō-vil′ ı̄; mikros, small + villus, shaggy hair) are specialized extensions of the cell membrane that are supported by microfilaments (see figure 3.1), but they do not actively move as cilia and flagella do. Microvilli are numerous on cells that have them and they increase the surface area of those cells. They are abundant on the surface of cells that line the intestine, kidney, and other areas in which absorption is an important function.