The Bowfin, Amia calva, is generally considered more derived than the gars (Fig. 13.19).

The Bowfin, Amia calva, is generally considered more derived than the gars (Fig. 13.19).  Amia and its extinct relatives in two other orders make up the subdivision Halecomorphi, which is the sister taxon to the division Teleostei (Halecomorphi +Teleostei =Halecostomi). Amia retains the abbreviate heterocercal tail and rudimentary spiral valve intestine of more primitive groups, but has teleost-like amphicoelous vertebrae as well as cycloid scales, a scale type in which the ganoid and dentine layers have been lost, leaving only a reduced bony layer. The Bowfin’s cycloid scales resemble those in teleosts but are probably convergent and not homologous with teleostean cycloid scales (Jarvik 1980; Stiassny et al. 2004). The Bowfin’s head is exceptionally bony, invested in massive dermal bones that are greatly reduced in teleosts. The Bowfin is distinct among all living fishes in possessing a single, median gular plate on the underside of the head (Fig. 13.19D). It is the only non-teleostean fish to swim via undulations of its long dorsal fin, which allows it to move slowly both forward and backward with stealth. Rapid swimming is accomplished by more conventional body and tail movements (Scott & Crossman 1973; Becker 1983). 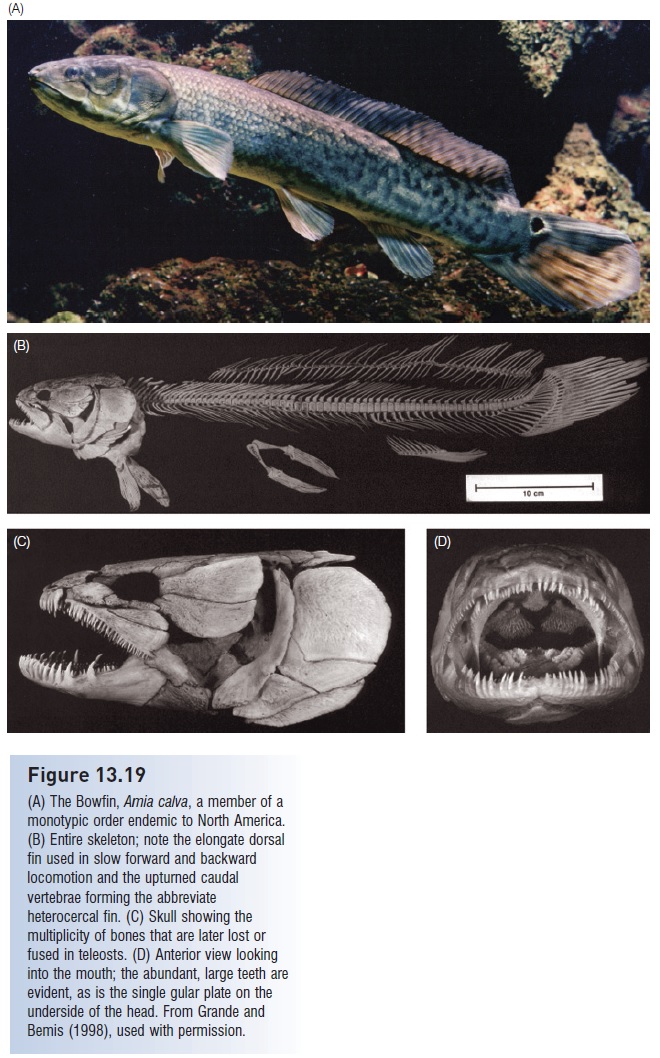 (A) The Bowfin, Amia calva, a member of a monotypic order endemic to North America. (B) Entire skeleton; note the elongate dorsal

fin used in slow forward and backward locomotion and the upturned caudal vertebrae forming the abbreviate heterocercal fin. (C) Skull showing the multiplicity of bones that are later lost or fused in teleosts. (D) Anterior view looking into the mouth; the abundant, large teeth are evident, as is the single gular plate on the underside of the head. From Grande and Bemis (1998), used with permission.

Ontario to eastern Texas. It is most common in vegetated lakes and backwater areas of large rivers, occupying deeper waters by day and moving into shallows at night to feed. It has abundant, sharp, conical, slightly curved teeth on both the jaws and palate (the internal structure of the teeth is unique among vertebrates); strong jaw musculature; large size (to 1 m and 9 kg); and opportunistic, predatory habits. Bowfin feed on invertebrates, fishes, frogs, turtles, snakes, and small mammals, which they engulf via suction, whereas gar impale food on their small, sharp teeth (Lauder 1980).

Bowfin males build nests in shallow water by clearing a circular depression on the bottom about 0.5 m across. The males also engage in parental care, guarding the young vigorously until they are relatively large (10 cm). The male has a distinct black spot at the base of its caudal fin; such nonseasonal sexual dimorphism does not occur in other living primitive bony fishes, although males and females differ in many teleosts.

Amia is incapable of surviving in warm, deoxygenated water without access to atmospheric oxygen. As in gars, Bowfin gulp air and pass it to a highly vascularized gas bladder. Some controversy has developed over whether Bowfin are capable of lungfishlike estivation in drying conditions. Anecdotal evidence suggests that Bowfin can bury in mud and survive for periods of weeks (e.g., Green 1966), whereas experimental laboratory findings suggest that Bowfin are physiologically incapable of surviving more than 3–5 days of air exposure (McKenzie & Randall 1990). Definitive field manipulations have yet to be performed.

Amiiform fishes have been distinct since the Early Jurassic, amiids appeared in the Late Jurassic, and the genus Amia dates back at least to the Early Eocene (Grande & Bemis 1998). The fossil record reveals 11 genera and 27 other amiid species, including three other species in the genus Amia; representatives occurred in North and South America, Europe, Asia, and Africa (Grande & Bemis 1998). Many were marine fishes and almost all were piscivorous, as evidenced by fish remains in their stomachs. One Eocene giant,Maliamia gigas, from West Africa may have attained a length of 3.5 m (Patterson & Longbottom 1989).