The commonest agent involved in overdose (or rodenticide-related poisoning) is warfarin (coumafene).

The commonest agent involved in overdose (or rodenticide-related poisoning) is warfarin (coumafene). Brodifacoum, dife-nacoum, and bromadiolone are 4-hydroxycoumarin derivatives with a 4-bromo (1-1 biphenyl) side chain. Coumatetralyl is a 4-hydroxy coumarin derivative rodenticide which most likely produces a long acting anticoagulant effect. It differs from brodifacoum in having a 2H-1-benzopyran-2-one group in place of the 4-bromo (1 -1 biphenyl) group found in brodifacoum. Chlorophacinone, diphacinone and pindone are indandione anticoagulants with a long duration of action. All these agents produce a more potent and persistent anticoagulant effect than warfarin or other coumarin compounds.

·              All oral anticoagulants act by inhibiting vitamin K (which is a cofactor in the post-ribosomal synthesis of clotting factors II, VII, IX, and X), by interfering with the activity of vitamin K 2,3-epoxide reductase and vitamin K quinone reductase.

·              Platelet count, fibrinogen level, and the concentrations of other clotting factors remain unaffected. Fibrin split prod-ucts may be elevated

·              In overdose with long acting anticoagulants, PT prolonga-tion and clinical bleeding have persisted for 45 days to 8 months.

■■   Following oral administration, warfarin is bioavailable to the extent of 100%, peaking in the plasma in about 1 hour, with a volume of distribution of 0.126 L/kg and protein-binding of 98 to 99%.

■■   Elimination half-life is about 40 hours. Duration of action may extend upto 5 days.

o     Purple toe syndrome is due to small atheroemboli which are no longer adherent to their plaques by clot.

o     Patients with protein C, protein S, and antithrombin deficiencies are at increased risk for skin necrosis. The common sites for necrosis include breasts, thighs, and buttocks. 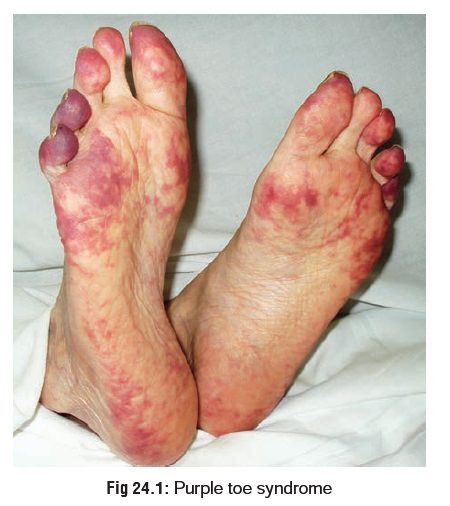 ·              The gastrointestinal tract is the site of bleeding in most of the patients. Upper airway bleeding may result in pain, dysphonia, dysphagia, dyspnoea and inability to clear secretions. Intracranial haemorrhage and haematomyelia may occur following warfarin therapy.

·              Hypotension occurs as a result of hemorrhage due to warfarin therapy, particularly in patients who are over anticoagulated.

·              Alopecia is reported to occur after both acute and chronic use. The response is directly related to the highest dose given and not to the duration of treatment. Hair is shed diffusely two or three months after an adequate dose of the drug.

·              Warfarin or other coumarins, if administered during preg- nancy (especially the first trimester) can cause a malforma- tion syndrome—warfarin embryopathy.

o     Craniofacial, musculoskeletal, skin, eye, gastrointes-tinal, and cardiovascular developmental abnormali- ties have been observed in the offspring of women administered warfarin during pregnancy (Fig 24.2). It causes characteristic skeletal anomalies when given in the first trimester, and central nervous system defects when given later in pregnancy. 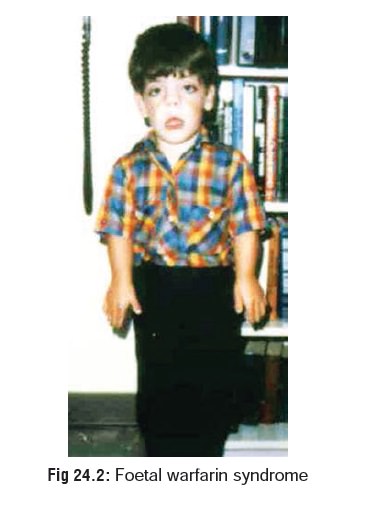 o     Heparin does not cross the placental barrier and therefore can be given during pregnancy.

·      Overdose with coumarins leads to bleeding in multiple organ sites that can prove life-threatening. In massive overdose, these agents have produced rapid and persistent hypopro-thrombinaemia and associated bleeding diathesis. Table24.2 lists some of the laboratory (and other investigative)findings.

·      Warfarin may lead to toxic effects by ingestion, inhalation, and intravenous administration. It is moderately toxic by dermal, subcutaneous, and intraperitoneal routes.

·      The primary effect of warfarin overdose is prolongation of prothrombin time, and subsequent risk of haemorrhage.

·              The onset of prolonged PT correlates with the half-life of factor VII, usually appears within 24 hours of ingestion, and peaks between 36 to 72 hours. Clinical manifestations begin a few days or weeks after ingestion, and include epistaxis, gingival bleeding, pallor, haematuria, haematochezia, melaena, and haematomas around joints and on buttocks. Other symptoms include back pain, bleeding lips, mucous membrane haemorrhage, abdominal pain, vomiting, and petechial rash. Later, paralysis due to cerebral haemorrhage, and finally haemorrhagic shock and death may occur.

·      Long-acting anticoagulants are about 100 times more potent than warfarin on a mole for mole basis. In addition, they have a much longer duration of action which can sometimes last for weeks or months. While the onset of prolonged prothrombin times occurs generally within 48 hours, the first clinical signs of bleeding may be delayed until one to four weeks after ingestion. Common manifestations in such cases include purpura, GI bleeding, haematemesis, haemoptysis, epistaxis, haematuria, melaena, menorrhagia, and CNS bleeds. Multiple ecchymoses and haematomas may be evident on physical examination. Chest pain and tachycardia may develop secondary to blood loss.

·              Plasma levels of warfarin can be measured by a variety of techniques, but are not generally obtained to monitor the clinical course in poisoning cases.

·              The international normalised ratio (INR) or prothrombin time (PT) are the best values to monitor. The onset of INR elevation or PT prolongation is between 12 and 24 hours post-ingestion. Any increase in INR or prolongation of prothrombin time when compared to normal controls, indicates toxicity. The risk of bleeding is minimal with a PT of 1.3 to 1.5 times control. At PT of 2 times control or greater there is an exponentially increased risk of bleeding. In the case of long acting anticoagulants, INR or prothrombin times may be normal 24 hours post-ingestion, and become prolonged at 48 hours or later, therefore 24 and 48 hour PT (or INR) has been recommended.

·              Monitor haemoglobin and haematocrit if bleeding occurs. Monitor urine and stool for occult blood. Various imaging studies may be helpful in diagnosing spontaneous haem-orrhage into various tissues or body compartments.

·              Admit to intensive care facility and monitor clotting parameters. Watch out for signs of bleeding or bruising. Coagulopathy may persist for 6 weeks or longer in patients who ingest large amounts of long acting anti-coagulants in suicidal attempts. Premature discharge of such patients at 3 to 4 weeks postingestion prior to full normalisation of factor levels has resulted in fatalities.

·              Frequent outpatient monitoring should be done on patients discharged on oral vitamin K1 to ensure compli-ance and adequacy of treatment. Factor assays should be normal prior to discontinuation of vitamin K1.

·              Emesis and gastric lavage are contraindicated due to the potential risk of inducing bleeding.

·              Activated charcoal can be administered. Patients on chronic anticoagulation therapy should receive acti-vated charcoal after an acute overdose unless contrain-dicated.

·              Mode of action: Since oral anticoagulants are vitamin K antagonists, administration of vitamin K1 sets right the anomaly. Vitamins K2 (menaquinones), K3 (menadione), and K4 (menadiol sodium diphosphate) are not recom-mended, since they can induce haemolysis, hyperbiliru-binaemia, and kernicterus in neonates, and haemolysis in G6PD deficient patients.

–– Intramuscular use can result in haematoma forma-tion.

–– Anaphylactoid reactions have been reported with vitamin K1.

·              Administer fresh frozen plasma and/or prothrombin complex concentrate and packed red blood cells as needed for significant active bleeding. The usual dose of fresh frozen plasma given to correct coagulation factor deficiency is 15 ml/kg, but the recommended dose required to reverse over anticoagulation due to warfarin has not been established.

·              Since long-acting anticoagulants are metabolised by the hepatic mixed-function oxidase system (cytochrome P450), phenobarbitone 100 to 200 mg/day, may be helpful in reducing the duration of coagulopathy by inducing the hepatic microsomal metabolism of these compounds.

·              Anticoagulant poisoning may result from accidental, suicidal or homicidal causes.

·              Suicidal intake of such rodenticides is also quite commonly reported in India.

·              Covert use of long acting anticoagulants may be a manifes-tation of child abuse or Munchausen syndrome.