Morphine sulfate is the standard against which the effectiveness and adverse reactions of other pain medications are measured. (See Using opioid agonists safely.)

A person may receive an opioid agonist by any administration route, although inhalation administration is uncommon. Oral dos-es are absorbed readily from the GI tract; however, transmucosal and intrathecal opiates are faster-acting.

Opioid agonists are distributed widely throughout body tissues. They have a relatively low plasma protein-binding capacity (30% to 35%).

Opioid agonists are metabolized extensively in the liver. For ex-ample, meperidine is metabolized to normeperidine, a toxic metabolite with a longer half-life than meperidine. This metabolite accumulates in patients with renal failure and may lead to CNS ex-citation and seizures. Administration of meperidine for more than

48 hours increases the risk of neurotoxicity and seizures from buildup of normeperidine.

Metabolites are excreted by the kidneys. A small amount is excret-ed in stool through the biliary tract.

Opioid agonists reduce pain by binding to opiate receptor sites (mu receptors and N-methyl-D-aspartate receptors) in the periph-eral nervous system and the CNS. When these drugs stimulate the opiate receptors, they mimic the effects of endorphins (naturally occurring opiates that are part of the body’s own pain relief sys-tem). This receptor-site binding produces the therapeutic effects of analgesia and cough suppression. It also produces adverse re-actions, such as respiratory depression and constipation.

Opioid agonists, especially morphine, affect the smooth muscle of the GI and genitourinary tracts (the organs of the reproductive and urinary systems). This causes contraction of the bladder and ureters. It also slows intestinal peristalsis (rhythmic contractions that move food along the digestive tract), resulting in constipa-tion, a common adverse effect of opiates.

Too much of a good thing

These drugs also cause blood vessels to dilate, especially in the face, head, and neck. In addition, they suppress the cough center in the brain, producing antitussive effects and causing constric-tion of the bronchial muscles. These effects can produce adverse reactions if excessive. For example, if the blood vessels dilate too much, hypotension can occur.

Opioid agonists are prescribed to relieve severe pain in acute, chronic, and terminal illnesses. They also reduce anxiety before a patient receives anesthesia and are some-times prescribed to control diarrhea and suppress cough-ing. (See How opioid agonists control pain) 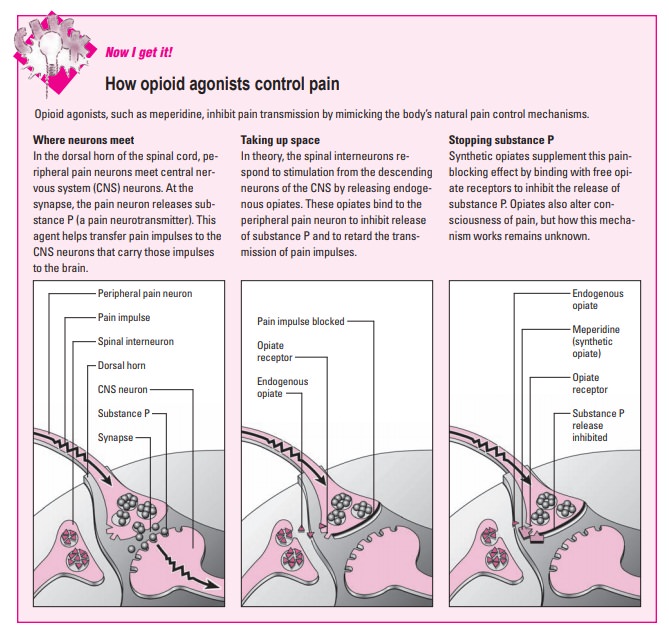 Morphine relieves shortness of breath in patients with pulmonary edema (fluid in the lungs) and left-sided heart failure (inability of the heart to pump enough blood to meet the needs of the body). It does this by dilating peripheral blood vessels, keeping more blood in the periphery, and decreasing cardiac preload.

·                 The use of opioid agonists with other drugs that also decrease respirations, such as alcohol, sedatives, hypnotics, and anesthet-ics, increases the patient’s risk of severe respiratory depression.

·                 Taking tricyclic antidepressants, phenothiazines, or anticholin-ergics with opioid agonists may cause severe constipation and urine retention.

·                 Drugs that may be affected by opioid analgesics include carba-mazepine, warfarin, beta-adrenergic blockers, and calcium chan-nel blockers. (See Adverse reactions to opioid agonists.)